A version of this was published in The Santa Fe New Mexican
July 6,  2012 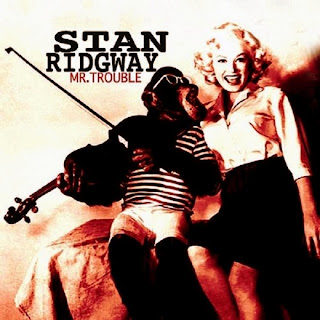 The first time I saw Stan Ridgway touting Mr. Trouble on Facebook, he referred to it as a “four-song EP.” That was just a couple of months ago. Somehow, the project kept growing, and by the time it made it to CD form, the darn thing had become a 10-song, 45-minute album.

For those keeping score, there are six new songs here plus four live tracks — all of which are taken from Ridgway’s 2010 appearance on the Mountain Stage radio show. So what we have here isn’t really an album but two EPs occupying space on one disc.

This raises an interesting question: who cares?

Whether it’s an album or EPs (or a breath mint or a candy mint), Mr. Trouble contains some of the best new songs Ridgway has done in years.

Ridgway 101 for the uninitiated: The first memory many longtime fans have of Stanard Ridgway is his face rising out of a pot of beans in the video for the song “Mexican Radio.” Ridgway was the singer of the Los Angeles New Wave group Wall of Voodoo. The video was an early MTV favorite — and it was far snazzier than anything A Flock of Seagulls or The Buggles ever did.

In a way, it was fitting that the Wall achieved fame through a video. The band formed in hopes of being hired to write and perform soundtracks for low-budget movies. But not long after that video — and the excellent Call of the West album, which contains “Mexican Radio” — things started falling apart, and Ridgway left to start a solo career.

After a short stint with Geffen Records, Ridgway has gone the independent route, not achieving massive fame but — with the help of his wife, keyboardist Pietra Wexstun — building a healthy cult following.

Back to the present: The first Mr. Trouble tunes that really grabbed me were the bluesy, funky, crime-jazz-tinted numbers, which hark back to Ridgway’s early solo years in the mid-’80s — when critics were calling him a rock ’n’ roll Raymond Chandler.

“All Too Much” (no, not The Beatles’ song) is a breezy, soul-informed workout — there’s a horn section! — in which Wexstun and guitarist Rick King shine. The melody might remind you of The B-52s’ “Love Shack,” but the lyrics aren’t so idyllic. Ridgway, as he’s known to do, sings about corruption, injustice, and hard times.

“Well it’s a hot afternoon on a city street/A cop in black and strolling his beat/He hears a baby crying from a window ledge/Times are tough and people still on the edge/And there’s a gang of boys movin’ on the corner/lookin’ mean and gettin’ ready to fight/As somewhere downtown in a high-rise office a man at the bank tells you times are tight.”

The title song is a swampy blues number that allows King to show off some nasty Tony Joe White licks and Ridgway to blow his distinctive harmonica. What’s that strange sitar sound you hear in the background in the first minute or so of the song?

Even better is “Gone Deep Underground,” a snappy, bass-driven sleaze-blues jumper in which Ridgway sings about institutions crumbling and various people making themselves scarce. The song is full of images of boarded-up houses, people sleeping in airport bars, and even a secret government laboratory. It also contains some of the funniest lyrics I’ve heard lately: “Sandstorm blowin’ into Phoenix can ruin a perfectly good toupee/Hey, somebody hand me a Kleenex/She’s on a crying jag that won’t go away.”


“Across the Border” might just be the prettiest and saddest song Ridgway’s ever written. It’s a wistful tune colored by what sounds like  tropical marimbas. The melody is gorgeous, and I don’t think Ridgway’s voice has ever sounded better. But it’s the story he tells that will punch you in the gut. A woman carrying only a small suitcase and a cellphone is leaving her country, crossing the border to start a new life.

As she’s walking, she gets a call from her husband or boyfriend, I assume, who’s trying to change her mind. But it doesn’t work. “‘This country, it once was a jewel/In a wilderness so wild and so cruel/But now no one can fix it, everything’s broken/So I’m leavin’ tonight in this rain/And nothing can stop me, no chain/And least of all you, so don’t call me again,’ and she closed up her phone.” And then comes an unforgettable image. “She walked ahead slowly, her hands holding tight/A boy on the corner lost the string of his kite/And it blew past the red, white, and blue and into the gold, red, and green/Across the border.”

At first I assumed the protagonist is a Mexican, leaving her “broken” country to come to the good old U.S.A. But could it be that she’s an American going into Mexico? After all, the boy’s kite is apparently flying across the border into Mexico, so that’s the way the wind is blowing. 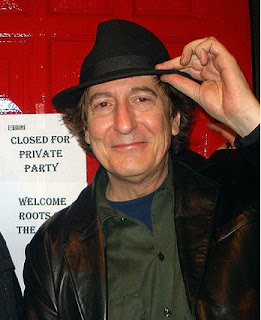 The Mountain Stage tracks are decent, if not essential, performances of acoustic-oriented Ridgway tunes, with bluegrass honcho Tim O’Brien playing fiddle. The material is drawn from Ridgway’s first solo album, 1986’s The Big Heat; his previous album, Neon Mirage, from 2010; and a couple from in between. The finest of these is one of Ridgway’s best-known songs, “Camouflage,” a Vietnam ghost story that never gets old, even when you know the surprise ending.

The thing I like most about this album is that it’s far more upbeat than the comparatively somber Neon Mirage, an album made following the deaths of several of Ridgway’s loved ones. Like the title character of his new album, Ridgway seems eager to cause a little trouble here. And it sure sounds good.

Blog Bonus: Enjoy this video of a couple of songs from Mr. Trouble