TERRELL'S TUNEUP: On Sand and Dickinson

A version of this was published in The Santa Fe New Mexican
July 6,  2012

For more than a quarter century, a raspy-voiced oracle from Arizona named Howe Gelb has been cranking out fascinating recordings of sun-dried songs and wind-chapped ballads, presiding over an ever-changing lineup in a band called Giant Sand. 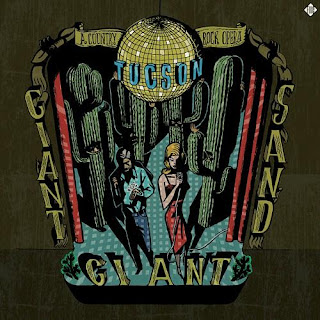 Since 1985, Giant Sand has released about 20 albums, not including a fistful of Gelb’s solo albums and records released under the name “The Band of Blackie Ranchette.”


And he’s still at it. Just last month Gelb unleashed Tucson: A Country Rock Opera, a sprawling (70-minute!) musical saga featuring a sprawling band (up to a dozen members in the latest configuration, including a string section from Denmark) called Giant Giant Sand.

According to press materials, Tucson tells a tale that “revolves around a semi-grizzled man with overt boyish naiveté who sets off to escape his hometown and embarks on a life-changing road trip; eschewing all his worldly goods and leaving his girlfriend, encountering jail at the Mexican border, finding love at a train station saloon and fearing the end of the world.”

I’ll be honest: if you’re just listening to the album without benefit of liner notes and lyric sheet, it’s going to be difficult to follow the plot, the characters, etc. My advice is not to worry about it. Just sit back and enjoy the music. There’s much to enjoy, and you won’t be tested on the words.

There are some surface similarities between Tucson and El Santo Grial: La Pistola Piadosa, last year’s strange, beautiful, and disturbing album by Slackeye Slim. While Slackeye didn’t bill Santo Grial as an opera, like Tucson, it’s a work of interconnected songs that tell a story (Slackeye’s album more obviously so.) Both Gelb and Joe Frankland (aka Slackeye Slim) are dark, brooding presences on their respective works. Dabbed on both of their palettes are country music, off-kilter alt rock, the sounds of Mexico, and cowboy songs.

A couple of big differences, though, are that 1) in Tucson, Gelb also dips his brush into cocktail jazz (on “Ready or Not,” sung by the sleepy-voiced Lonna Kelley and “Not the End of the World,” sung by Gelb and Kelley) and gutbucket blues (on “Mostly Wrong,” featuring Gelb’s voice accompanied only by guitar) and 2) The body count in Slackeye’s story is much higher than it is in Gelb’s.

The highlights of Tucson include the opening song, “Wind Blown Waltz,” an acoustic barroom lament full of yearning and tumbleweed imagery that sets the tone for the album; “Caranito,” an upbeat cumbia sung in Spanish; and “Thing Like That,” which also appeared on the first Giant Sand album I ever owned, 1992’s Center of the Universe. The new version has rockabilly overtones, drawing from the sound of early Johnny Cash — yet it also includes that Danish string section. (I do miss the electric-guitar freakout of the original version, though.)

Maybe it’s just because the death of Levon Helm earlier this year shook me so much, but the song that first grabbed me by the throat was a cover of “Out of the Blue,” a lesser-known song by The Band, which originally appeared on The Last Waltz. Gelb trades verse with Kelley and other band members; all of them sing this aching tune with soul. Steel guitarist Maggie Björklund sounds heavenly on this.

Though Giant Sand is now “giant giant,” most the songs on the album don’t feature everyone at once. Some, like “Mostly Wrong,” just have one or two instruments. In fact, there are so many slow, somber, minimalist tunes that I wish it were a lot more loud and rowdy.

Most of Gelb’s music in recent years has tended to be mellow. But he’s the kind of artist who’s hard to predict, so maybe next time he’ll raise the roof, or at least the volume. 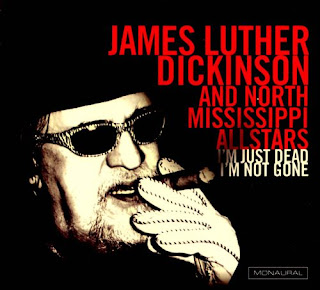 * I’m Just Dead, I’m Not Gone by James Luther Dickinson and North Mississippi Allstars. You know by the brief spoken introduction of this live album that the recording isn’t exactly new. Dickinson leads off with a pointed jab at “our father in Washington,” George W. Bush. While the political reference is slightly dated, the music isn’t. This is the stuff of the immortals.

By the time of his death in 2009 at the age of 67, Dickinson had become the face of Memphis music, or at least one of that city’s most aggressive musical ambassadors. For some four decades, if you were a musician who wanted to add some Memphis to your music, Dickinson was your man.

As a producer, a piano-plinkin’ sideman, and a field recorder, he worked with everyone from Aretha Franklin to Mudhoney, from The Flamin’ Groovies to Furry Lewis, from Otha Turner to The Replacements, from Screamin’ Jay Hawkins to Petula Clarke … you get the picture. That’s Dickinson playing piano on The Rolling Stones’ “Wild Horses,” Bob Dylan’s album Time out of Mind, and too many Ry Cooder albums to mention.

Dickinson was a fine performer in his own right, as this, his second live album (the first being 1997’s A Thousand Footprints in the Sand), proves. Recorded in Memphis in 2006 and backed by the North Mississippi Allstars — which includes his two sons, guitarist Luther and drummer Cody — this mostly is good-time blues-soaked, country-fried roots rock.

Only a genuine sociopath could listen to Dickinson’s version of “Kassie Jones, Pt. 1” (the story of mythical railroad engineer Casey Jones) without a huge stupid grin. Same goes for his rendition of Sleepy John Estes’ “Ax Sweet Mama.”

But Dickinson also was capable of getting serious. “Codine,” written by Buffy Sainte-Marie, is an intense minor-key rage against narcotic addiction. Dickinson practically shouts some of the lyrics: “Got a pain in my belly, an ache in my head/Feel like I’m dyin’, I wish I were dead.”

And then there’s Dickinson’s version of bluesman J.B. Lenoir’s frightening “Down in Mississippi.” The arrangement of this song is close to that on Cooder’s soundtrack to the 1986 movie Crossroads. (Dickinson played piano on that version, too.)

I’m Just Dead would be a great introduction for someone not familiar with Dickinson’s music. And for old fans, it’s a great reminder of what a force Jim Dickinson was.


Here's Mr. Dicksinson, a few months before he died: