A version of this was published in The Santa Fe New Mexican
July 20, 2012 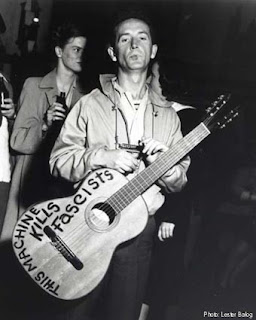 Hey, hey, Woody Guthrie, you wrote us some songs.

And because July 14 would have been Guthrie’s 100th birthday, it’s a good time to celebrate his impressive body of work, which in turn celebrates all of us — when he’s not calling a pox on cruel vigilantes, bankers who rob you with a fountain pen, and others who would oppress the people.

I realized that Guthrie had transformed from a dusty old counterculture outcast hero into a mainstream icon eight years ago when I was covering a campaign speech by President George W. Bush in Albuquerque. At the end of the rally there was canned music — upbeat, if not quite inspirational, instrumental versions of patriotic songs. And among these was “This Land Is Your Land” by Guthrie.

I couldn’t resist needling a Republican friend I saw there. “Do you realize they’re playing a song written by an admitted communist?” He looked at me like I was crazy.

But a lot of people take this stuff seriously. At least they used to. 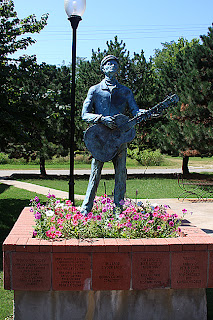 According to the Roadside America website in an article about the Guthrie statue in the the town of Okemah, Oklahoma, where he was born, local folks “remembered him mostly as a socialist who wrote a regular column, `Woody Sez,’ for The Daily Worker — the newspaper of the American Communist Party.”

It’s true that there were lots of bitter feelings about Woody’s politics among conservative elements in the Sooner state. I remember visiting there in the mid-’70s when the idea of the Okemah statue was first being discussed. The Daily Oklahoman was frothing over the notion of building a memorial for a commie folksinger. As Roadside America notes, “It wasn’t until 1998, 31 years after his death — and after everyone who disliked him had also died — that the town erected a statue in his honor.”

So you can listen to the songs of Woody Guthrie these days without being labeled a dangerous subversive. And there’s lots to choose from.

Here are my Top 10 Guthrie covers.

1) “Do-Re-Mi” by Ry Cooder. Guthrie meant for this song to be good-natured and humorous, a warning to poor folks against being lured to California to find work only to be exploited and mistreated once they got there. But on his live album, Show Time!, Cooder, aided by Flaco Jiménez on accordion, combines this with the Mexican polka “Viva Sequin” to turn “Do-Re-Mi” into a fiesta.

2) “Vigilante Man” by Hindu Love Gods. The Love Gods was a one-off project by Warren Zevon, backed by members of R.E.M. in 1990. This is a straightforward folk-rock version led by Zevon’s ragged voice and Peter Buck conjuring up the music of both Luther Perkins and Ennio Morricone on guitar.

3) “I Ain’t Got a Home in This World Anymore” by Bruce Springsteen. This appears on a 1988 various-artists compilation called Folkways: A Tribute to Woody Guthrie and Leadbelly. It was just a few years before that when Springsteen’s manager turned him onto Joe Klein’s biography Woody Guthrie: A Life, which was instrumental in politicizing Springsteen. Springsteen also did a rocking version of “Vigilante Man” on this tribute album, but his mournful, acoustic version of “I Ain’t Got a Home” goes straight to the heart.

4) “Philadelphia Lawyer” by The Maddox Brothers & Rose. This is a tale of revenge — well, perhaps just Old West justice — about a cowboy who loses his sweetheart to a slick attorney from the East. I’ve got it on a collection called America’s Most Colorful Hillbilly Band Vol. 1. Rose Maddox would record it again as a bluegrass number a few decades later on a solo album, This Is Rose Maddox.

5) “Deportee (Plane Wreck at Los Gatos)” by The Byrds. Guthrie wrote this song in 1948 after reading about a U.S. government plane deporting 28 people to Mexico. The plane had caught fire over Los Gatos Canyon in California and crashed, killing everyone on board. Guthrie was saddened by the tragedy and angered at the fact that the victims weren’t named. The Byrds did this song as a country waltz, powered by those trademark Byrds harmonies.

6) “Pretty Boy Floyd” by The Byrds. Again with the Byrds. In their early days they were known as devoted Dylan interpreters. But they also did well by Guthrie. Years before I’d ever heard this song, my Oklahoma grandmother used to tell me the story of the famous Robin Hood-style bank robber delivering a truckload of groceries to the poor in Oklahoma right before Christmas one year during the Depression. Most of the world, me included, first heard this tune, done as a bluegrass romp on the landmark 1968 country-rock album Sweetheart of the Rodeo.

7) “Hard Travelin’ ” by Simon Stokes. Guthrie sang this as a happy hobo tune. But Stokes, with his gruff voice and minor-key arrangement, makes a listener believe that he’s traveled every mile and barely survived the journey. Stokes sounds like a hobo who would rip out your spleen and throw it in the pot with his Mulligan stew. He sounds scary in the song even when he does a verse in a strange falsetto.

8) “Grand Coulee Dam” by Lonnie Donegan. This song celebrates a massive public-works project of the ’30s — an economic stimulus package on a scale we can’t even imagine these days. True story: in 1941 the Bonneville Power Administration in Portland, Oregon, hired Guthrie to write music for a film about the Columbia River and public power. This song, “Roll on Columbia” and several others came out of that arrangement. Skiffle King Donegan’s 1958 studio recording of this song is a spirited take that gets faster and faster as the song progresses.

9) “Dust Bowl Refugee” by James Talley. This song is from Talley’s excellent tribute album, Woody Guthrie and Songs of My Oklahoma Home, which was recorded in Santa Fe at Stepbridge Studios in the 1990s. This is one of Guthrie’s finest if not that famous Dust Bowl ballads, and Talley did it justice.

10) “This Land Is Your Your Land” by Sharon Jones & The Dap Kings. Guthrie wrote in response to Kate Smith’s “God Bless America,” which he thought was pompous. “This Land” has been de-fanged to the point that it’s no more controversial than a summer camp singalong. But Jones, the most significant soul singer to arise in the last 10 years or so, puts fire and defiance back into the tune.

Here are some of those songs on video