TERRELL'S TUNEUP: Halloween in the Garage

A version of this was published in The Santa Fe New Mexican
Oct. 26 2012 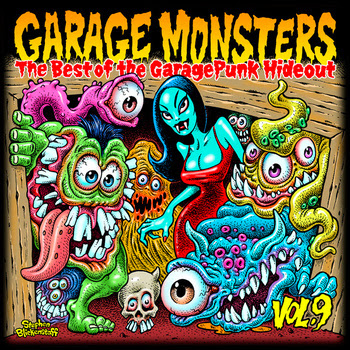 October is perhaps the most wonderful time of the year for fans of
garage/punk/surf/psychedelic/rockabilly/primitive-trash-rock music.

Bubbling in the underground of this strange world, there’s an entire subgenre of Halloween spook music — songs of zombies, vampires, and werewolves.

Brought up on the works of old masters — or is it old monsters? — like Roky Erikson, Screamin’ Jay Hawkins, Screaming Lord Sutch, and The Cramps, the denizens of Garageville frequently employ horror-movie motifs.

Usually it’s done with a wink in the eye and a tongue in the cheek — more Herman Munster than Blair Witch. But when done correctly, the music will light you up like a jack-o’-lantern.

Which brings us to Garage Monsters: The Best of the Garage Punk Hideout, Vol. 9, the latest compilation from the online garage social network. Like the previous eight collections, Hideout honcho Jeff “Kopper” Kopp assembled this mess from songs submitted from bands and musicians who are Hideout members.It’s the biggest Hideout compilation yet, with 33 songs — an hour and 37 minutes worth of music. 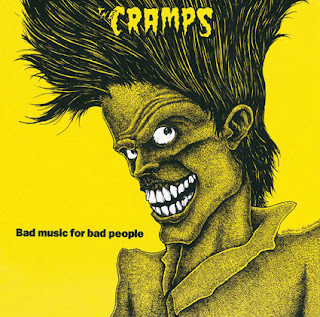 The download-only compilation comes with colorful monsterous cover art by Stephen Blickenstaff, most famous for the cover of Bad Music for Bad People by The Cramps back in the ’80s.

Like other Hideout volumes, there’s good variety. There’s ’60s influenced Farfisa, fuzz ’n’ fury such as “Creatures of the Night” by Paradise from Oregon; more punk-oriented blasters like “Voodoohexenshakit!” by The Brimstones of New Jersey; some one-man-band action (“I’m Your Frankenstein” by Chazdaddy from Rochester, New York).

There's a taste of rockabilly-informed material such as “Rockin’ in the Graveyard” by Sweden’s two-man trash band Thee Gravemen; several surfy instrumentals including “The Maniac” by Thee Cormans and “The Wild Ride of Ichabod Crane” by The Blue Giant Zeta Puppies; and even a Tom Waits and ska-influenced tune, “Shoot Me Down” by an English band, Rattlin’ Bone.

Among my favorites are the all-you-can-eat cannibal rocker “Brain Buffet” by The Evil Farm Children, a Canadian band; “Shoot the Freak” — by LoveStruck — named for a now-closed Coney Island attraction (Danish-born singer Anne Mette Rasmussen spits out the line “I am a lunatic!” pretty convincingly).

Other favorites include “A Bloody Life” by Rev. Tom Frost, a Frenchman who sounds like he’s familiar with both Nick Cave and Waits, though this song has echoes of The Dickies’ “Killer Clowns From Outer Space” and “Rattlin’ Bones,” a primitive stomp sweetened by electric organ by Fire Bad! of Oklahoma City; and the twangy, slow-burning noir-rock of “Voodoo Love Song” by Northside Garage from Cincinnati.

You can find this compilation at all the usual download joints. The GaragePunk Hideout is HERE

1) “Bloody Hammer” by Roky Erickson. Actually, just about any song from his early-’80s horror-rock masterpiece The Evil One would fit in on this list. But “Bloody Hammer” has to be the scariest song Erickson ever sang — and that’s really saying something. The lyrics refer to a demon in the attic, baby ghosts, and Dracula vampires, but the most frightening character is the narrator himself, a psychiatrist who insists, “I never had the bloody hammer!”

2) “Bloodletting (The Vampire Song)” by Concrete Blonde. It’s the title song of CB’s greatest album, and it deserves to be a Halloween classic. I knew the minute I heard Johnette Napolitano sing the opening lines of this tune (“There’s a crack in the mirror and a bloodstain on the bed”) that I’d be a fan for life.

3) “Murder in the Graveyard” by Screaming Lord Sutch. In the 1960s, David Edward Sutch was one of the first rockers to make horror themes a predominant feature of his stage show. This little tune had it all: violent death in a spooky setting with a happy melody and a rocking beat.

4) “You Must Be a Witch” by The Lollipop Shoppe. This was Fred Cole’s first major band, back in the mid-’60s, decades before Dead Moon or The Pierced Arrows. In this song, immortalized years later in the Nuggets collection, Cole sounds like he’s at the mercy of supernatural forces not inclined to show any mercy at all.

5) “Fire” by The Crazy World of Arthur Brown. British rocker Arthur Brown took Lord Sutch’s shtick to even greater heights. The familiar opening invocation, “I am the God of Hell’s fire and I bring you …” was a shout heard over AM radios the world over in the psychedelic autumn of 1968. 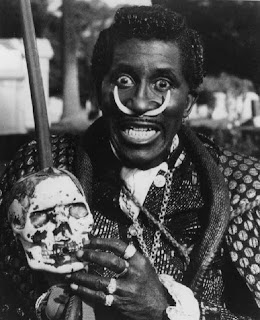 6 & 7) “Feast of the Mau Mau” and “Alligator Wine” by Screamin’ Jay Hawkins. These basically are the same song — dark recipes with different ingredients. The former has “the fat off the back of a baboon” and the “fleas from the knees of a demon,” while the latter includes “the blood out of an alligator” and “the left eye of a fish.”

8) “I Was a Teenage Werewolf” by The Cramps. The scariest element of this song isn’t the lyrics. It’s how alien and threatening this music must sound to someone not familiar with the wild pleasures of The Cramps. Here the late Lux Interior sounds as if he’s about to sprout fangs and fur.

9) “Ghost Riders in the Sky” by Lorne Greene. I wrote a column on this hallucinatory cowboy tale a few Halloweens back. There’s a galaxy of versions of this song, but my favorite is still good old Ben Cartwright’s orchestrated take from his album Welcome to the Ponderosa.

10) “Living Dead Girl” by Rob Zombie. While a lot of Mr. Zombie’s techno/metal doesn’t do much for me, this ditty from his Hellbilly Deluxe album always brings joy to my heart.

11) “(It Was a) Monsters’ Holiday” by Buck Owens. This was Buck’s shameless effort to cash in on the monster craze of the mid ’60s. It beat “The Monster Mash” by a country mile.

A touch of Sutch