TERRELL'S TUNEUP: Shelter From the Tempest

A version of this was published in The Santa Fe New Mexican
Oct. 5, 2012

Every few years Bob Dylan comes out with a new album like a medicine-show huckster returning to fleece a sleepy town.

Maybe the snake oil he sold you the last few times didn’t really cure what was ailing you. Maybe the euphoric effects didn’t last very long. But the show is usually fun; the music is nearly always great. And the joy juice the sly old crook is peddling does have a weird kick — whatever it is.

And such is the case with Tempest, the latest Dylan album, released last month. Some critics immediately declared that it’s one of the old master’s best, ranking it up there with Highway 61 Revisited, Blonde on Blonde, Blood on the Tracks, and Empire Burlesque. (Just checking if you’re paying attention there with that last one.) 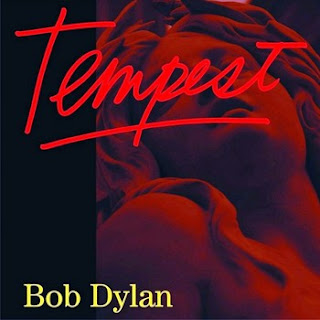 I wouldn’t go that far, but I’m inclined to agree with one review that proclaimed Tempest to be Dylan’s best album since the turn of the century. Of course, there’s not much competition for that distinction. Not counting his 2009 Christmas album, it’s only his fourth record since the end of the ’90s.

For the past 10 or 15 years, Dylan’s voice has evolved into a wizened rasp, a world-weary hobo growl. But somehow he makes his ravaged vocal cords work in his favor. The gravel in his gut and the phlegm in his throat give his voice a fascinating aura.

Call it the croak of authority.

We don’t even hear Dylan’s voice for almost a minute into the album, but that’s OK. The guitar and steel-guitar instrumental intro to “Duquesne Whistle” can’t help but make a listener grin. It sounds like some strange old 78, evoking images of both Jimmie Rodgers and Laurel and Hardy before it settles into a railroad shuffle.

“Listen to that Dusquesne whistle blowin’, blowin’ like it’s gonna sweep my world away,” Dylan sings. The words — written by Grateful Dead lyricist Robert Hunter — may sound foreboding. Later Dylan sings that the whistle is “blowin’ like the sky’s gonna blow apart.” But any apprehension is overshadowed by the joyfulness of the melody.

The next tune, “Soon After Midnight,” is a slow love song, one of the prettiest Dylan has done in a long time. The melody and the arrangement are reminiscent of sweet, melancholic instrumentals from about 50 years ago like Floyd Cramer’s “Last Date” and “Sleep Walk” by Santo & Johnny.

This leads into “Narrow Way,” a rocking blues like many of the better tunes on Dylan’s previous two albums, Together Through Life and Modern Times. In the song, Dylan warns, “I’m armed to the hilt, and I’m struggling hard/You won’t get out of here unscarred.”

He’s darn tootin’. This one contains an unusual historical lesson: “Ever since the British burned the White House down/There’s been a bleeding wound in the heart of town.” I can’t help but think this is a disguised reference to the 2001 attack on American soil and the effect it’s had on the American psyche during the past 11 years.

Speaking of bleeding wounds, the body count on Tempest is much higher than on your usual Dylan album.”Pay in Blood” is the title of one song. “I pay in blood, but not my own,” goes the refrain. In one verse he snarls, “I got something in my pocket make your eyeballs swim I got dogs could tear you limb from limb.” Yikes! And by the final verse he’s threatening, “Come here I’ll break your lousy head.”

The record is full of several epic story songs, lengthy tracks that deal with violence and/or death. “Roll On John” is a seven-minute ode to his friend John Lennon. He was murdered more than 30 years ago, but Dylan makes the pain of his death seem fresh. The title song is a near-14-minute sea chantey about the 1912 sinking of the Titanic. Dylan turns this oft-told tale into an apocalyptic metaphor set to an upbeat melody with echoes of “When Irish Eyes Are Smiling.”

In a dirge called “Long and Wasted Years” — one in which the only tragic victim may be the soul of the singer — Dylan croaks, “I wear dark glasses to cover my eyes/There are secrets in them I can’t disguise.”

(Dylan fans might recall cool Bob raising some eyebrows this year by wearing his shades at the White House when accepting his Medal of Freedom from the president.)

With Tempest, once again, he’s lifted those glasses a little and let a few more secrets out. Dylan’s never-ending medicine show rolls on. 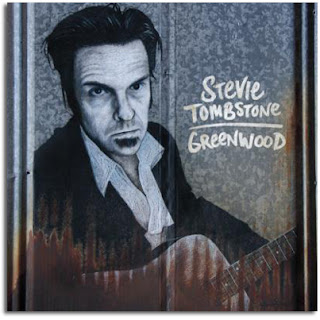 * Greenwood by Stevie Tombstone. No, I’m not declaring Tombstone “the new Dylan.” But I bet a lot of Dylan fans would appreciate his music.

In fact. you might argue he’s like a reverse Dylan. The sainted Bob started out as a folkie and then went electric. The Georgia-born Tombstone started out electric, with a powerful if unsung “swamp rockabilly” (as he calls it) band called The Tombstones, and then went acoustic.

I’ve heard several Tombstone solo albums, and this one’s my favorite. It may be his most personal as far as lyrics go, but he never sounds self indulgent. He grabs you from the very first line in the opening track, “Lucky”:


The title song is not about the awful singer who wrote and recorded “God Bless the U.S.A.” It’s the story of a young Tombstone who in 1991 bought a tombstone for blues god Robert Johnson.

Accompanied by Johnson contemporary Johnny Shines, Tombstone went to the purported Johnson grave in Greenwood, Mississippi, to place the headstone. Apparently that evoked some criticism by some blues fans who blasted Tombstone for what the singer thought was an act of respect.

“I won’t go back to Greenwood, I’m not welcome there,” he sings.

While these are strong tunes, my favorite is the jaunty country song “I Wish I Was Back in Las Vegas.” Maybe it’s just because it’s the only song I know of that starts out talking about huevos rancheros.

Here's Mr. Tombstone telling the story behind the title song.