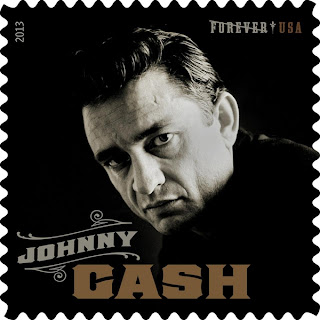 I'm not sure of the release date, but it'll be at post offices everywhere later this year as a part of a new "American Icon" series.

From Beyond the Perf, a stamp collector site ("online extension of the USA Philatelic catalog" to be exact):


Resembling the appearance of a 45 rpm record sleeve, the square stamp features a photograph taken by Frank Bez during the photo session for Ring of Fire: The Best of Johnny Cash (1963). In the photo, Cash stares out at the viewer through a veil of shadow, his brooding expression fitting for an artist known to so many people simply as “the Man in Black.”