OPENING THEME: Let it Out (Let it All Hang Out) by The Hombres
Don't Tease Me by Question Mark & The Mysterians
Keels Be Damned by Churchwood
Strychnine by The Sonics
Train Crash by The Molting Vultures
Catastrophe by Mark Sultan
Johnny's Got a Gun by Dead Moon
Falling Off the Face of the Earth by The Electric Mess
American Music by The Blasters 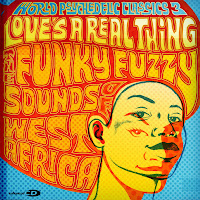 Blue Rain in Africa by Otis Taylor
Shoot the Freak by Lovestruck
The Ballad of Dwight Fry/Sun Arise by Alice Cooper
CLOSING THEME: Over the Rainbow by Jerry Lee Lewis