A version of this was published in The Santa Fe New Mexican
March. 22, 2013

This is the closest thing you’re going to hear to a new Sonic Youth album in the foreseeable future.

I’m talking about the new self-titled album by a band called Chelsea Light Moving, headed by Sonic Youth singer-guitarist Thurston Moore. The group is named after a New York moving company that was run by composer Philip Glass before he got famous. 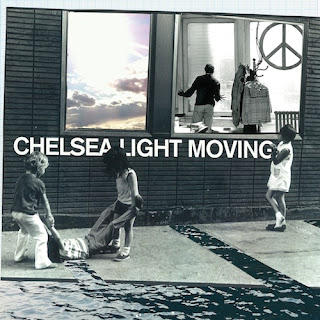 Moore and bassist Kim Gordon announced in late 2011 that their marriage was over and that the band, which had been exploring the furthest reaches of feedback screech for 30-some years, would be going on “hiatus” after it finished its tour. Except for an avant-garde project Moore and Gordon did with Yoko Ono that was released last year, we haven’t heard much of a peep from them since.

But earlier this month, Moore and his new cronies came banging in with this album. Had I heard songs like “Burroughs” or “Sleeping Where I Fall” without first knowing anything about the project, I would have just assumed it was some Sonic Youth material I’d never heard before.

In fact, it’s a huge relief to old fans that it sounds nothing like the folky, heavy-on-the-strings, look-ma-no-feedback, airy-fairy Demolished Thoughts, Moore’s most recent solo album.

With the opening song, “Heavenmetal,” I was afraid Moore might be heading back toward that Demolished Thoughts state of mind. There are no harps or violins, just a laid-back acoustic tune with New Agey proclamations like “Be a warrior. Love life.” I guess he’s just trying to align his chakras and be the best Thurston he can be.

Luckily, he and the band come roaring back in the next song, “Sleeping Where I Fall,” which starts off quietly but slowly builds to SY-like intensity.

One of my favorites is the roughly eight-minute tune “Alighted.” It goes through all sorts of changes in tone and tempo, including a fierce brontosaurus-rock interlude right before Moore’s vocals come in (nearly halfway through the song).

This is followed by “Empires of Time,” another excursion into discordant craziness, with Moore declaring “We are the third eye of rock ‘n’ roll!” I’m not sure who the pounding “Groovy & Linda” is about, but it is centered around the line “Don’t shoot — we are your children.” It takes this old hippie back to the days of Kent State.

In “Burroughs,” Moore pays tribute to Naked Lunch author William S. Burroughs, singing, “Ah, Billy, the sweetest drug is free/Will you, Billy, shoot it into me?”

“Mohawk” features Moore reciting poetry instead of singing. Toward the end of the track, he invokes the memory of the late singer of The Germs, an early Los Angeles punk group: “Darby Crash came back from England with a mohawk, though he might have referred to it as a ‘Mohican’/Your laugh stays with me. It’s not the first time.”

The memory of Mr. Crash is further honored in the last song, a high-charged cover of The Germs’ “Communist Eyes.”

Chelsea Light Moving isn’t exactly an album for the ages. Though Moore’s bandmates are all fine musicians, guitarist Keith Wood is no Lee Ranaldo. And if Samara Lubelski has anything resembling Gordon’s snarling aura, it doesn’t come out on the record.

A larger problem is that with Moore handling all the vocal duties, old fans probably will miss the vocal variety of his old group, in which Ranaldo and Gordon also contributed lead vocals.

But it’s an enjoyable romp for those who have followed Moore all these years. If Sonic Youth can’t go home again, this is a tasty, if not completely satisfying, consolation prize.

Sonic nostalgia: Sonic Youth was a wonderful thing. The group sprung out of New York in the early ’80s, heavily influenced by the avant-garde post-punk No Wave scene. It started getting mainstream attention with 1988’s Daydream Nation, rode the Nirvana-era alt-rock scare and braved on, true to its vision for nearly two more decades.

Like The Beach Boys, who never changed their name to The Beach Men, Sonic Youth remained forever Youth well after the band and most of its fans reached middle age.

I got to see the group four times in four different cities.

I caught them in Denver in 1995 when they were headlining Lollapolooza and working their then-current album, Washing Machine.

Two years later, I was at the Freedom Tibet show in New York, where they played mostly long instrumentals.

The following year, I caught them in Austin at South by Southwest, where they previewed material from A Thousand Leaves. The show was far better than the album. In the next couple of days, I happened to be in two different barbecue joints where Sonic Youth was eating. (I wasn’t stalking, honest.)

But the best Sonic Youth show I ever saw was in Santa Fe in the summer of 1999. In a tent.

It was for SITE Santa Fe’s third international biennial, back in the days when SITE had artsy rockers for fundraisers during that event. (Patti Smith and Laurie Anderson had performed in connection with previous biennial shows.)

The night before, in Austin, someone stole Sonic Youth’s rented Ryder truck full of instruments and equipment, so the band had to rent all of that to perform.

Then Moore got irked when he found out that tickets for the show were $50, which would exclude a lot of fans. The group demanded that kids from Warehouse 21 next door be let in for $1. (That’s what I remember. Some say the kids were let in for free.)

Suddenly the tent was shaking with dozens of sonic teens rocking out, and the band seemed to feed off that injection of energy.