TERRELL'S TUNEUP: View From the Bottom

A version of this was published in The Santa Fe New Mexican March 15, 2013

I was Googling Terry Allen the other night, looking for a recent interview I’d heard about. The Lubbock-born Santa Fe resident has just released Bottom of the World, his first CD of new material since 1999. At the top of the Google news page was a little web ad that read “Terry Allen’s records www.instantcheckmate.com Did you know Terry Allen’s criminal history is searchable?” 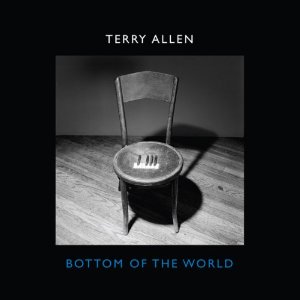 How’s that for outlaw cred? No, I didn’t run Allen’s name through  the search. I seriously doubt that it has anything on the artist. And even  if it did, I’m sure it wouldn’t be nearly as interesting as the record of  his records.

You can’t call Allen a prolific musician — he’s just a henchman of his weird muse, which often commands him to work in other mediums, such as sculpture, painting, theater, and multimedia installation.

The albums he has released since the 1970s are full of poignant stories, hard-eyed observations, sardonic wit, unforgettable characters, and occasionally some righteous rage.

The first thing that Allen fans might notice on the new record is that it seems more somber and quieter than most of his others. There are no raucous roadhouse rockers like you find on earlier records. Here the songs tend to be slow, the melodies are mostly sad, and the lyrics are clear — and they often sting. It’s the kind of album you have to sit  down and listen to.

Except for Allen’s keyboards, this is basically an acoustic affair with longtime Lubbock crony Lloyd Maines adding some guitar and steel guitar; Richard Bowden, another longtime Allen collaborator, on fiddle; Brian Standefer on cello; and Allen’s son Bukka on accordion and B3 organ. Bukka’s wife, Sally Allen, does harmony vocals on some tunes.

Bottom of the World starts out in familiar territory. The opening track, “Four Corners,” is a new version of an old song that originally appeared on Allen’s 1975 debut album, Juarez (which a wise critic once described as “a breathtaking tour of the underbelly of the Southwest, the barrooms, the whorehouses, the trailer parks, and the highways by hard-bitten and not entirely lovable characters”). It’s a bittersweet memory of a lost love and a wistful way to open the new album. After nearly 40 years, the song (as well as the entire Juarez album) has aged quite well.

“Four Corners” is followed by “Queenie’s Song,” which Allen co-wrote with Guy Clark more than a decade ago. It appeared on Clark’s 2002 album The Dark. This is the story of a crime that took place in Santa Fe. On New Year’s Day in 1999, Allen’s dog Queenie, who had been missing, was found shot to death. “Bet you got a gun for Christmas/That don’t make it right/What in the hell were you thinkin’/With little Queenie in your sights,” Allen sings, the anger still in his voice. It makes me pig-bitin’ mad too. I hope the jerk who shot Allen’s dog is reading this.

But this is only the beginning. Allen’s new songs show he’s still got the knack. “Do They Dream of Hell in Heaven” would tickle the ghosts of Mark Twain and William Blake. “Do they dream of hell in heaven?/Do they regret how hard they’ve tried/Wish now they’d been much more sinful/And repented just a minute before they died?” Here he raises an important theological question: “Is there something strange about heaven they just don’t want you to know?”He ends the song with the image of “the golden gates of forever” closing “tight on all the fun.”

Some of the best songs on this album show earthly situations in which fun doesn’t seem like an option. “Emergency Human Blood Courier” wouldn’t sound out of place in a sequel to Juarez. In an ominous minor-key Mexican-style melody, Allen speaks the lyrics: “Emergency human-blood courier headed south down to Mexico/Where there’s been a whole lot of bleeding, and there’s going to be a whole lot more/Emergency human-blood courier in a vehicle red as nails/Haulin’ blood down to the borderlines/Where all systems seem to have failed.”

The album’s biggest punch in the gut is “The Gift,” a song ripped from the headlines. It was apparently inspired by the suicide of Wall Street swindler Bernie Madoff’s eldest son, who hanged himself in December 2010, on the second anniversary of his father’s arrest. “Ah, oooh, it’s a gift from daddy,” Allen sings. “Everything you see, is daddy’s.” In the last verse he describes the suicide — how Mark Madoff put his young son to bed and then went and hanged himself in the kitchen doorway. “It’s a gift from daddy/He lost all he had, and he gave it to you.”

While “The Gift” might leave you feeling bleak, Allen ends the album with two songs of love and commitment. “Sidekick Anthem” assures a friend that “I’m just a call away.” Then the last track, “Covenant (for Jo Harvey),” is a sweet love song for his wife of five decades. Some of the people he sings about in Bottom of the World have indeed hit bottom. Allen may empathize with them, but he knows he’s got a refuge.

Here's a song from Bottom of the World