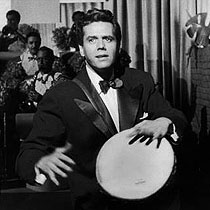 I've said it before: Ricky Ricardo was the father of World Beat. Or at least Desi Arnaz was. The Cuban bandleader brought exotic sounds into a huge percentage of American homes via his role on I Love Lucy.

But Ricky wasn't alone. There were lots of cool international sounds -- both foreign and domestic -- flittering about the pop charts of the 1950s and early '60s.

Here's the great South African singer Miriam Makeba, who brought her country's music to the U.S. a quarter century before Paul Simon's Graceland.

Blame it on the bosa nova. I knew "The  Girl from Ipamena" was sexy before I even knew what sex was.

Were Art & Dottie Todd the spiritual forefathers of Stereolab?

And we love Ricky