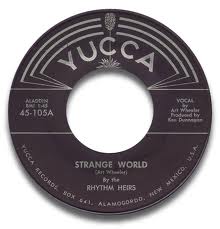 Let's start this week off with a salute to a some New Mexico rock 'n' roll history: Yucca Records in Alamogordo.

This company put out some great rock, country and blues sounds in the 1950s and '60s. Probably the best known rock rocker to record there was El Paso's The Bobby Fuller Four, who released two singles on Yucca in 1961. Also bluesman Long John Hunter released several 45s on Yucca. The complete 45 Discography is HERE.

Norton Records has acquired a "motherlode" of unreleased Yucca recordings, which a recent Norton email described as "a star in Norton's ever growing constellation of able labels. Yucca’s output in the 1950’s and 1960’s is equaled by the number of world class recordings that sat in the can for fifty years."

Here's some Youtubes of a few Yucca records:


Finally, some politically-incorrect fun with hijacking ...


Hat tip to David Barsanti for inspiring this post.
at August 19, 2013