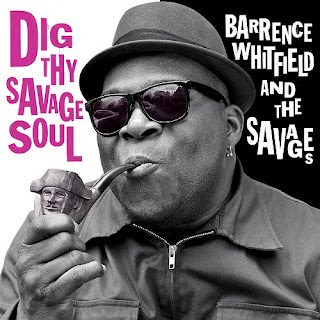 After being apart for 25 years or so, wild man Whitfield reunited with the core of the original Savages to jump-start the group. With guitarist Peter Greenberg (a resident of Taos for the past several years) and bassist Phil Lenker (like Greenberg, a veteran of Boston garage-punk giants Lyres), the Savages made their “comeback” debut in New Mexico in September 2010 (with shows in Taos, Santa Fe, and Albuquerque).

Soon afterward they toured Europe and rereleased an expanded version of their early-’80s self-titled first album and their first new record together in a quarter century, Savage Kings. Now they’re back for more — and on one of my favorite labels, Bloodshot Records, no less.

Dig Thy Savage Soul shows that Savage Kings was no fluke. Whitfield’s voice is still in fine form —  whether he’s singing or screaming — the band is as tight as ever, and the material is inspired. Most of the songs are written by various Savages (including several by Greenberg and Taos crony and Manby’s Head bandmate Michael Mooney).

The album kicks off with “The Corner Man,” with its “love is like a boxing ring” theme, a pounding beat, and an urgent guitar riff. “You know she’s got a Sunday punch/You know you’ve got to face the feint/Kiss her hand or kiss the canvas/And love her through the standing eight.” (Later in the song the phrase “kiss her hand” is slightly altered.) On “Sugar” Whitfield sings, “If you wanna beat me/That’s OK/ ’Cause I’m already beat up anyway. ... If you wanna slap me/That’s just fine/ ’Cause you know I’ll hardly feel it after one more glass of wine.”

My favorite on this album (and there are so many  good tunes, this one is likely to change) is “Hangman’s  Token,” one of the Greenfield/Mooney tunes. It starts off with a guitar riff virtually identical to the main hook of “Come Back Bird,” a forgotten garage-band classic by The Chevelle V (and recorded just a few years ago by Manby’s Head). It’s probably the only track that even comes close to having any political  content.

“Now some folks appear so helpless, not a penny to their name/Get accused by them in power/ It’s a lowdown dirty shame/See that rich man in his  mansion/While the poor folks live in tents/See they’re  only there for the blamin,’ and it just doesn’t make no sense.”

Another standout is the minor-key soul workout “I’m Sad About It.” I’ve read a couple of reviews that compare Whitfield on this cut to Screamin’ Jay Hawkins. I’ll buy that. Some of Whitfield’s most accomplished screaming is here.

The album ends with an old Jerry “Boogie” McCain  song called “Turn Your Damper Down.” But there’s no indication that either Whitfield or his Savages intend to follow that advice. Once again they’ve made  a near-perfect album for those of us who like a little garage rock in our soul music or a lot of soul in our garage.

* The South Side of Soul Street: The Minaret Soul Singles, 1967-1976. Minaret was founded in the early 1960s in Nashville as a country and rock ’n’ roll label. A few years later a man from Valparaiso, Florida, named Finley Duncan bought the label. Duncan’s résumé — he owned a nightclub and a company that supplied jukeboxes and cigarette machines and served as a county chairman for the Democratic Party — might make him sound like a villain from some Burt Reynolds hicksploitation movie, but he’s the hero of this story.

He decided to take Minaret in a soul direction. By 1969 he partnered with Nashville producer Shelby Singleton to build Playground Recording Studio in Valparaiso, where most of the songs on this album were recorded. (The earliest ones were done at a variety  of studios, including Muscle Shoals Sound Studio  in Alabama.)

And yikes, what recordings! I hadn’t heard of any of the artists on this two-disc set — Big John Hamilton, Genie Brooks, Willie Cobbs, Doris Allen, Willie Gable, Johnny Dynamite, or Leroy Lloyd & The Dukes. Nearly every one of these tracks could proudly have been played on the radio right alongside of the great soul hits of the mid to late ’60s. And in fact, a lot of them should have been hits.

About half the songs here are by Hamilton, a South Carolina native who played with Etta James and Hank Ballard before coming to Minaret. While the liner notes emphasize what a nice guy and responsible family man he was, on “Big Bad John” (no, not the Jimmy Dean hit) he portrays himself as Stagger Lee reincarnated. “You know I walked in my room with my Colt .45/I saw my baby sitting with this guy/I shot him once, I shot her twice/I don’t give a ... if they’re dead or alive.” (I love how back then you could brag about killing people as long as you didn’t use the word “damn.”)

Hamilton also does a slow soul take on “Before the Next Teardrop Falls” (recorded years before Freddy Fender made it a national hit) and a rousing cover of Buddy Miles’ “Them Changes” with Doris Allen.

Allen is responsible for one of the stranger songs here, “Kiss Yourself for Me.” She sings to a faraway lover, “Make believe you’re in my arms just like you used to be/Walk up to your mirror and kiss yourself for me.”

That's not the only Minaret track that refers to children’s rhymes. Willie Gable playfully reworks “Row, Row, Row Your Boat” into something soulful and sexy. The other Gable song on this album, “Eternally,” features an electric sitar, an instrument that had a short shelf life, though I think it deserves revival.

“Blue Diamonds,” by a band called Double Soul, is a slow, sultry soul ballad, while Willie Cobbs’ “Don’t Worry About Me” and Hamilton’s “Lift Me Up” are straight-up blues.

Things apparently slowed down drastically for Minaret after 1970. Only four sides after that year appear on this album. The glory days of Southern soul were gone, and the age of disco was approaching. But these sounds are immortal, and these musicians  deserve wider recognition. I’m grateful to Omnivore Recordings for digging up this beautiful, if overlooked, music.