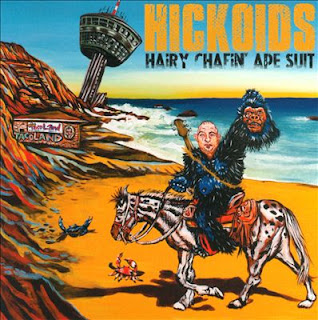 Harry Chapin was an American singer-songwriter who was most famous for his early-1970s pop hits “Taxi” and “Cat’s in the Cradle.” A dedicated activist devoted to ending world hunger, Chapin died in a car accident in 1981 at the age of 38 on his way to perform a free concert in East Meadow, New York. He was a distant cousin of singer-songwriter Mary Chapin Carpenter.

None of this has anything to do with the music I’m about to discuss. But it occurred to me that fans of the San Antonio band known as The Hickoids might not realize where the name of the band’s new album, Hairy Chafin’ Ape Suit, came from. (On their website, Hickoid honcho Jeff Smith explains, “It was kind of one of those things where you just string some words together and it sounds amusing. It also echoed our derision for Harry Chapin, though I’m sure he was a nice man.”)

The title has a long history in the Hickoids mythos. Reportedly it was first mentioned in print nearly a quarter century ago. Back in 2010 the band teased us with The Hairy Chafin’ EP — a strictly limited release, according to the back cover of the CD — that included early recordings of four songs that would later be redone. And early this year, four songs from the new album appeared on a split LP with their friends and European tour buddies, The Grannies. (More on that below.)

Just who are these Hickoids? And who are they to besmirch the memory of a noble humanitarian like Harry Chapin?

They started out in San Antonio in the mid-1980s. Known as one of the first
progenitors of cowpunk, the group was more than just a sloppy country-western parody band. Sure, they could pull off a hilarious mock hillbilly weeper like “Driftwood 40-23” and a completely nutso cover of the Hee Haw theme. But many other songs were short on twang while full of rage, fire, and profanity (though never without a big Texas grin).

The original version of the group flamed out in the early ’90s, but after a decade of dormancy, they sprang back to life in the new century. And here’s a local angle: Santa Fe punk-rock vet (and current Austin resident) Tom Trusnovic (Monkeyshines, The Blood Drained Cows, The Floors, 27 Devils Joking) has been a full-fledged Hickoid for the past couple of years. He played drums for them on one tour and then switched to guitar.

As with the band’s earlier incarnation, this latest version of the group plays music that is raw trashy joy, a drunken joy ride down Thunder Road all the way to Armageddon.

Those who discovered The Hickoids through their previous record, Kicking It With the Twits (a twisted tribute to the British Invasion and English glam bands), might be surprised that many tracks from Ape Suit are more representative of the cow part of the cowpunk equation.

There’s “TJ,” a song of border-town debauchery, in which Smith drawls, “If you go to Tijuana, please don’t smoke no marijuana/It might be laced with heroin and PCP/Be a good Americano, don’t mess with Mexicanas/Your poor honey’s gonna miss you when you’re gone.” The song borrows from the melody and final refrain of “Me and Bobby McGee.”

The Hickoids pay subtle tribute to the late George Jones on a song called “If Drinkin’ Don’t Kill Me, Kill Me,” which sounds like country filtered through The Rolling Stones.

There’s “Side by Side Doublewides,” which is sung by guitarist Davy Jones and proposes a redneck solution to the age-old problem of personal space in a relationship.

And one of my favorites is “The Workingman’s Friend,” a lazy blues about a cut-rate gas station that starts out with a vow I’ve made to myself a few times: “If I can make it to that Workingman’s Friend/I’ll never play chicken with that gas gauge again.”

On other songs, the country is less obvious. The album starts out with a fierce, hard-driving rocker called “Fruit Fly,” which is a cover of a song by another San Antonio band, Loco Gringo. The Hickoids also help themselves to a tune by the Happy Dogs, another Alamo City band — the epic, near seven-minute “Stop It, You’re Killing Me.” It’s disgusting and filthy — the press release for the record says “Not suitable for terrestrial airplay!” Ooops! Anyway, it’s irresistible.

One of the funniest songs here is “Cool Arrow,” complete with cheesy synth — the same kind that has polluted too much Latino music since the 1980s. The narrator of this ditty fancies himself a lady’s man, bragging about his “bling bling” and his Camaro and proudly says people call him “Cool Arrow,” apparently oblivious to the fact that the phrase sounds like something dirty in Spanish.
There aren’t many cooler arrows than The Hickoids. 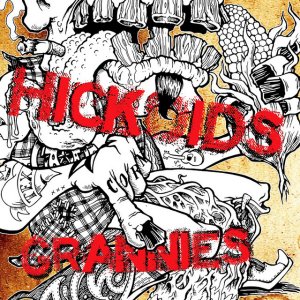 * 300 Years of Punk Rock by The Hickoids and The Grannies. I’ve already talked about all the
Hickoids tracks here, so let’s get straight to The Grannies’ side of this red vinyl delight.

I was going to call this San Francisco group a “raw, hard-hitting, no-nonsense punk band.” But that’s not true.

These cross-dressing maniacs — they’re fond of grandmotherly frocks and muumuus — are extremely pro-nonsense and proud. I’m quite fond of their previous album, For Those About to Forget to Rock, and most of the songs here are at least as strong as that effort.

The Grannies’ contributions to this record are all previously unreleased tracks. The song that sums up their sound is “Cranked Up Really High,” though my favorites here are “Eviler” (mainly for the crazed guitar solo) and their seismic cover of the Nervous Eaters’ “Just Head.”

But there’s one song that’s a serious departure for the group. The Grannies go country — obnoxiously so — on “God Loves The Hickoids,” a tribute to their friends from Texas. I’m not sure who is playing the Jew’s harp on this one.

This irregular LP is available at the regular online places. And the whole thing is streaming for free on Soundcloud.

And here's a classic:


And here's a spiffy Grannies video