A New Big Enchilada! We Goin' to New Orleans! 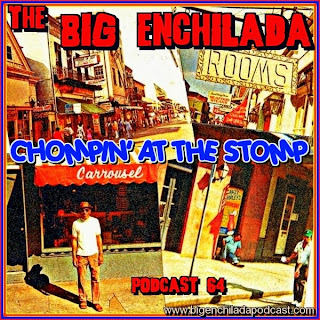 We goin' to New Orleans! Next week I'll be attending the 2013 Ponderosa Stomp, billed as a celebration of the unsung heroes of American music. This year's headliners include The Standells, The Sonics, Swamp Dogg, Ty Wagner and other under-appreciated R&B, rockabilly and garage-rock warriors. In anticipation of the festival, this episode -- following some of the crazed rock 'n' soul you expect from The Big Enchilada, you'll hear a rollicking tribute to the Ponderosa Stomp.  Stomp on!


Here's the playlist:
(Background Music: Mardis Gras in New Orleans by Dirty Dozen Brass Band)
New Orleans by The Plimsouls with The Fleshtones
Do the Trash by The Cryptics
Life on the Mountain by Los Tentakillls
Your Woman by Andre Williams & The New Orleans Hellhounds

(Background Music: Way Down Yonder in New Orleans by The Kansas City Six)
That's Your Problem by Mal Thursday & The Cheetahs
Sewer Fire by Thee Oh Sees
Switched On by The Insomniacs
The Cat Never Sleeps by Mama Rosin with Hip Bone Slim & The Knee Tremblers

Mr. Nobody by The Standells
Walking Down Lonely Street by Ty Wagner
Cops and Robbers by Boogaloo
Playin' Hide Go Seek by Eddie Daniels
Makin' Love by The Sloths
Baby Doll by Charlie Gracie