A version of this was published in The Santa Fe New Mexican
Sept. 27, 2013 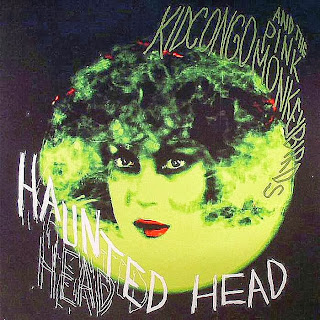 Brian Tristan, better known to his cult as Kid Congo Powers, has one of the best résumés in underground rock ’n’ roll today. Going back to the early ’80s, he’s done stints in The Cramps, The Gun Club, and even Nick Cave & The Bad Seeds. But with his band The Pink Monkeybirds, with whom he’s made three albums since 2009, the Kid has created his own unique sound, one that doesn’t sound like he’s trying to recycle those influential bands of his youth.

His latest album, Haunted Head, is another sturdy and impressive effort highlighting Powers’ guitar prowess without sounding self-indulgent, predictable, or wanky. The Pink Monkeybirds — guitarist Jesse Roberts, bassist Kiki Solis and drummer Ron Miller — are a tight little unit. The music is seamless, and there’s little punk-rock clatter or garage-band slop. And yet they don’t come off as too smooth or polished.

Haunted Head is heavier on the noir than the group’s previous works, especially tunes like the title song, “222,” and the slow and low album opener “Lurch,” all three of which could be set in a misty graveyard on some midnight dreary. With its reverb-soaked twangy guitar, “222” might even evoke memories of Chris Isaak’s “Wicked Game” — as used right before the car-wreck scene in David Lynch’s Wild at Heart.

Because the title song is so similar to one of Concrete Blonde’s greatest numbers (the explosive “Your Haunted Head”), it’s got something to live up to. Powers’ song doesn’t have the rage of that tune, and certainly his vocals are nowhere near those of Johnette Napolitano. But the Monkeybirds’ song has its own sinister integrity. And the intense (if too short) shredding guitar solo toward the end of the song is a wonder to behold.

Currently my favorite song on this album is “Su Su.” It’s a beefy, atmospheric rocker that shares a subtle sonic kinship with Talking Heads’ “Life During Wartime,” though it’s supposed to be a tribute to actress Susan Tyrrell, who died last year. 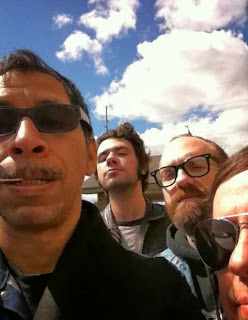 Requiem.” It opens with some faux doo-wop before Powers comes in reciting lyrics lifted right out of “Monster Mash”: “I was working in the lab late one night when my eyes beheld a hideous sight.” And then a story unfolds involving Humpty Dumpty. I’m not making this up.

There are a couple of songs — “Lady Hawke Blues” and “Loud and Proud” — that are built upon blues riffs. The latter, with its chicken-scratch guitar played over a spacey soundscape and caveman drums, is irresistible. Powers’ buried vocals could invite comparisons with those of The Fall’s Mark E. Smith.

Speaking of buried vocals, that’s my chief complaint with the album as a whole. It’s a weakness slightly less obvious on The Monkeybirds’ previous albums, Dracula Boots and Gorilla Rose. In all three, Powers’ vocals are mixed down way too low. Granted, he’s never pretended that his vocals are the main draw of this band. Basically, Powers doesn’t sing. He growls, reciting the words like one of those spoken-word artists fronting rock groups in the ’90s. But on the new one, the Kid’s vocals are so low that it’s difficult to make out the words in several songs.

Fortunately, the music of Haunted Head is evocative enough that it tells stories of its own. 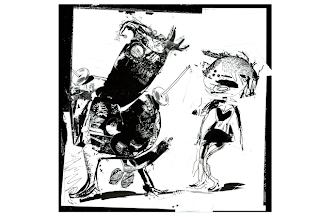 * EP1 by The Pixies. Let’s cut to the proverbial chase. This isn’t bad — well, it’s not terrible — but ultimately it’s pretty disappointing.

A little background: Rock ’n’ roll bands are like comic-book villains. They’re never really dead until you see their bodies.

Take my beloved Pixies. It looked as if they died in the early ’90s, right at the height of their popularity and influence. Not long after the release of their album Trompe le Monde, Pixie potentate Charles Thompson, aka Black Francis, aka Frank Black, announced The Pixies were no more.

And that seemed to be the case for a decade or so. But after a couple of years of reunion rumors, The Pixies actually did get back together for a tour in 2004. And apparently it was so successful that they did several subsequent tours.

At the outset of their rebirth, the band recorded a couple of new songs: Warren Zevon’s “Ain’t That Pretty at All” for a Zevon tribute album and “Bam Thwok,” a rocker written by Pixies bassist Kim Deal for (but not used in) the movie Shrek 2.

The two songs were a hopeful sign. But as far as new material went, there was no follow-up. Black Francis and the crew seemed content with playing their classics. And that’s what the fans wanted. The Santa Fe folks who packed into the Sweeney Center in November 2011 went to hear The Pixies play their breakthrough 1989 album Doolittle, not for “Bam Thwok” (though that would have made a pretty bitchen encore).

But something strange happened this year. Deal announced she was leaving the band around the same time Black Francis and the others went into the recording studio for the first time in nearly 10 years. (A guy named Simon Archer replaced her on bass for these sessions. Another Kim, Kim Shattuck from The Muffs, has since been hired for the touring band).

In July, the group released a free MP3 of a techno-edged slow-burning rocker called “Bagboy.” And now there’s this four-song EP. It kicks off with the slow, spacey “Andro Queen,” which sounds like a space-alien love ballad. That’s followed by a bland soft-rocker, “Another Toe in the Ocean.” If I’d never heard this one before and you told me this was Bob Welch-era Fleetwood Mac, I probably would have believed you.

Things start to get interesting with “Indie Cindy.” After a slow “Wave of Mutilation”-like instrumental intro, the song goes into what sounds like an angry rant by Black Francis. The chorus slows down into a pretty melody as he sings “I’m in love with your daughter.”

The finally song, “What Goes Boom,” starts off with a boom — hard ’n’ heavy, near-metal guitar from Joey Santiago. It’s the most rocked-out song here, but in the end, it’s forgettable. And that’s the case with the other three songs as well.

The Pixies surely will plow on and hopefully, even without Deal, they will keep thrilling audiences as they recreate “Monkey Gone to Heaven” and “Caribou” and “Broken Face.” But something tells me the restrooms will be crowded when they play “Another Toe” and “What Goes Boom.”

Blogging from New Orleans: Next week I’ll be in New Orleans looking for the ghost of Mr. Bojangles, eating oyster po’ boys, and attending the 2013 Ponderosa Stomp, a festival dedicated to the unsung heroes of American music. There are R&B, soul, rockabilly, zydeco, and garage-rock acts on the bill, including a few you might have heard of like The Standells, The Sonics, Maxine Brown, and the mighty Jerry Williams, better known as Swamp Dogg. Assuming I can get the crawfish off my fingers, I’ll be blogging about the Stomp right here at the Stephen W. Terrell Web Log. Bookmark it!

Meanwhile, here's a couple of videos:


And here's the official "Indie Cindy" video from The Pixies.