A version of this was published in The Santa Fe New Mexican
Sept. 6, 2013 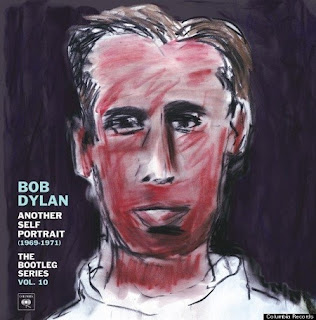 It's interesting that Columbia Legacy would release an two-disc "bootleg" set of unreleased Bob Dylan recordings centered around one of his most critically un-acclaimed albums in his 50-year career.

But that's the case of Another Self Portrait (1969-1971) The Bootleg Series Vol. 10. About half the songs are alternative versions, demos, or cutting-room-floor songs originally meant for Self Portrait, Dylan's album (it was a double album in the days of vinyl, though it all fit on a single CD) Released in the summer of 1970. There also are several different versions of songs that appeared on New Morning, (which came only months after Self Portrait), plus a smattering from Nashville Skyline and other projects.

At the time of its release, Self Portrait was the most controversial thing Dylan had done since "going electric" at the Newport Folk Festival five years before. In his autobiography, Chronicles, Vol. One, Dylan described this album: "I just threw everything I could think of at the wall and whatever stuck, released it, and then went back and scooped up everything that didn't stick, and released that too."

The critics raved. Actually, the critics ranted and it wasn't pretty. It was as if they felt personally that the most important artist of a generation had released a record that wasn't a grand revelation. Instead, despite the portentous title, Self Portrait was just a fun and sometimes sloppy musical notebook of Dylan singing some favorite folk and country songs, mixed in with a few live recordings and musical experiments.

"What is this shit?"was the opening sentence of the review in Rolling Stone (in those days a rock 'n' roll magazine, believe it or not) by Greil Marcus. Marcus, in the liner notes for the new collection, wrote that those were "the words that were coming out of everybody's mouth" when first hearing Self Portrait.

I was just a high school kid when Self Portrait came out and, for the most part I liked it. And for the most part, I still do. Sure there were some clunkers -- his undercooked version of Simon & Garfunkel's "The Boxer," the bafflingly over-produced "Bell Isle," the mediocre take on Elmore James' "It Hurts Me Too," and the outright bizarre "In Search of Little Sadie," which sounded like a stoned private joke. And, as is the case with many other classic double albums, Self Portrait could have, should have been boiled down to a single disc.


But there was so much to love in Self Portrait. The first song was the enigmatic "All the Tired Horses." Dylan didn't sing this. It was a chorus of three women singing, "All the tired horses in the sun / How am I supposed to get any riding done / Ummm ummm..." over and over again like some plantation dirge with a string section coming in. There was a raucous live version of "Quinn the Eskimo" (with The Band) that sounded like a saloon fight. And there was a straight version of "Little Sadie" on which Bromberg on guitar sounded so much like Doc Watson, I had to check the credits.

Dylan's laconic version featured a tasty dobro by David Bromberg and call-and-response vocals by the same trio that sang "All the Tired Horses." Later in the album there was a slightly faster "Alberta #2" and I liked that too. (And, to get ahead of myself a little, I also like "Alberta #3" on Another Self Portrait, despite its abrupt end.)

One of the most moving songs on the album was a moonshiner ballad, "Copper Kettle" where Dylan, in the voice of a proud defiant hillbilly Everyman, sings, "My daddy he made whiskey, my granddad he did too / We ain't paid no whiskey tax since 1792." There was The Everly Brothers' "Take a Message to Mary," with that haunting introduction by a female chorus, "These are the words of a frontier lad, who lost his love when he turned bad..."

But best of all was Dylan's version of "Days of 49," an old gold rush song about a sad '49 lamenting the loss of old compadres, a motley, whoring gaggle of drunks, brawlers and card-cheats -- the kind of men who built this great land of ours. "They call me a bummer and a gin-shot too, but what cares I for praise?" Dylan snarls. The verses document the lives and violent deaths of pals like Poker Bill, New York Jake and Ragshag Bill.

The devastating final verse puts it all in perspective: "Of all the comrades that I've had, there's none that's left to boast / And I'm left alone in my misery, like some poor wandering ghost ..." Makes you wonder whether Dylan has harbored a fear of being the last man standing among his glory-days contemporaries.

"Railroad Bill," a fine old American outlaw ballad included in Another Self Portrait, would have fit in perfectly among the Old West tunes on the original album. Why it was excluded while "The Boxer" was included we'll never know.

While any fan of any performer enjoys hearing out-takes and versions of familiar songs at various stages of development -- "New Morning" with horns, "Wigwam" without the horns, "Sign on the Window" with orchestra! -- my favorite tunes on the new collection are the ones like "Railroad Bill," that I'd never heard Dylan do before. There are a few, such as "Annie's Going to Sing Her Song" (written by folkie Tom Paxton) and a folk song called "Pretty Saro" that can only be described as gorgeous.

For sheer fun, it would be hard to beat the bluesy "Working on a Guru," featuring George Harrison on guitar, from the New Morning sessions. And for the pure mystery of folk music, Dylan, backed by Bromberg's guitar and pianist Al Kooper, sings a song called "Tattle O'Day," full of nonsense lyrics of animals with fantastic powers.

While I prefer the familiar versions of the Self Portrait songs to the versions on the new "bootleg" collection, there are exceptions. Both "Copper Kettle" and "Belle Isle" are stripped of their over-dubbed sweetening strings, leaving performances that only seem more passionate.

If nothing else, Another Self Portrait is forcing a second look of the original Self Portrait. Maybe it wasn't as big of a revelation as Highway 61 Revisited or Blonde on Blonde. But in its own strange way, it had its own revelatory power.

Some video for yas:


Dylan's "Alberta"s are cooler, but Pernell's is the first version I heard.