A version of this was published in The Santa Fe New Mexican
Sept. 13, 2013 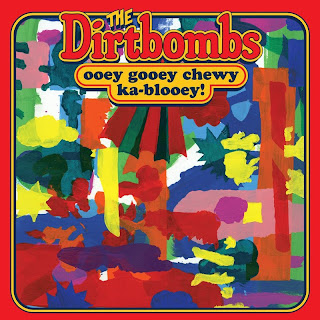 An actual bubblegum album by a serious grown-up band in 2013?

Yes indeed. Ooey Gooey Chewy Ka-blooey is a bubblegum album by The Dirtbombs, long promised by the group’s singer and guitarist Mick Collins.

The Dirtbombs are a serious band, right?

In my book they are. Started by Collins in the ’90s following the demise of his previous group, The Gories — an inspired blues/punk/slop band — The Dirtbombs were the best (if not the most famous, which would be The White Stripes) group to come out of the Detroit garage scene.

But bubblegum? Those of you who weren't around when bubblegum ruled the AM airwaves might not know what the term means. Sometimes “bubblegum” is used to describe any vapid teen pop, but that’s not what The Dirtbombs are doing on this album.

According to the All Music Guide, “Bubblegum is a lightweight, catchy pop music that was a significant commercial force in the late ’60s and early ’70s. Bubblegum was targeted at a preteen audience whose older siblings had been raised on rock & roll. It was simple, melodic, and light as feather — neither the lyrics or the music had much substance. Bubblegum was a manufactured music, created by record producers that often hired session musicians to play and sing the songs.”

The true giants of the genre were Buddha Records groups like The Ohio Express (known for hits like “Yummy Yummy Yummy” — yes, there was love in their tummies — and “Chewy Chewy”); The 1910 Fruitgum Company (“1, 2, 3, Red Light,” “Simon Says”); The Kasenetz-Katz Singing Orchestral Circus (“Quick Joey Small”); and made-for-TV bands like The Partridge Family, The Banana Splits, The Archies, and Lancelot Link & The Evolution Revolution.

Now technically, The Archies weren’t human. They were, in fact, cartoon characters. And the Banana Splits were human, but they were humans dressed like cartoon animals.

But even more out-there is the fact that Lancelot Link and his band were trained chimpanzees dressed in wigs and hippie costumes who appeared on Lancelot Link, Secret Chimp, a live-action Saturday-morning kiddie show in the early ’70s. An album of their music was actually released back then, and a video of the Lancelot Link song “Wild Dreams (Jelly Beans),” posted in a recent Ooey Gooey preview piece on Spin.com, shows these chimps indeed sounded a little like the Dirtbombs do on their new album.

Back during the great bubblegum scare, I was a little older than the target age group for this stuff, and for the most part I didn't share Collins’ affection for it. In fact, I hated the stuff. But little by little, I began to see at least a little value in the genre. Wilson Pickett had a hit with The Archies’ “Sugar Sugar.” A few years later, The Talking Heads covered “1, 2, 3, Red Light.” Meanwhile, The Dickies, an L.A. punk group, did a magnificent version of The Banana Splits theme song. And The Cramps covered “Quick Joey Small.”

And now The Dirtbombs have bubblegum on the soles of their shoes. They didn’t do covers of bubblegum hits. Instead, as Collins explained in an interview in Ghetto Blaster, “I wasn’t trying to make a period piece; I was more seeing if I could pick up where bubblegum left off ...”

If nothing else, Collins and crew capture the weird essence of many bubblegum elements. Just look at the song titles: “Sunshine Girl,” “We Come in the Sunshine,” “Sugar on Top,” “No More Rainy Days,” “Hot, Sour, Salty, Sweet,” “Hey! Cookie,” etc. I don’t know whether I’m in more danger of sunstroke or a diabetic coma after listening to this.

There are several songs that — apart from the candy-coated lyrics — don’t sound like a big stretch for The Dirtbombs. “Hot, Sour, Salty Sweet” is one of those, and so are “Sugar on Top” and “It’s Gonna Be Alright.” Collins’ guitar is righteously raunchy in these songs, even if the melodies are poppier than your usual Dirtbombs tune. And “Hey! Cookie” sounds like, well, a garage-rock number. It would have fit seamlessly in early Dirtbombs albums.

But other tunes sink deeper into the bubblegum goo.

“We Come in the Sunshine” owes a big debt to “Good Vibrations,” but there also are strange components such as the Bobby Sherman-style horns and vocal harmonies that sound closer to The Cowsills than The Beach Boys. “The Girl on the Carousel” is a dreamy slow dance featuring an oboe.

But the biggest leap is “No More Rainy Days,” which, after a minute or so of what sounds like an Oompa Loompa march, goes into a weird interlude featuring the voice of the sun. That’s right, the actual sun, whose droning rumble was recorded by a solar observatory run by Stanford University.

I’ll admit, these tunes all are fun and catchy, even if the childlike lyrics and lollipops and rainbows start to wear down a listener used to grittier themes. My main beef is that this is the second genre exercise in a row for the Dirtbombs — the previous album, Party Store, being a tribute to Detroit techno bands. I just hope the next album by this band I love so much is less gooey and has more ka-blooey. 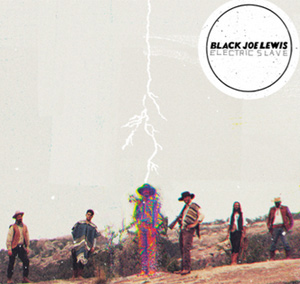 * Electric Slave by Black Joe Lewis. This is the hardest-edged record so far in the short but thrilling catalog of Lewis, an Austin native who, according to a recent piece in his hometown paper, recently moved to Montreal.

Unlike his previous two albums, this one is released under Lewis’ name alone, not with his band The Honeybears. The horn section is still there, but the soul and funk elements of Lewis’ early work are less apparent.

The album starts out with “Skulldiggin’,” which has such a distorted, fuzzed-out bass that in a just world, every obnoxious kid with a weapons-grade car stereo would be blasting this at every intersection in America.

“Guilty” is a frantic rocker with tasty guitar-sax interplay. The nearly seven-minute “Vampire” sounds like a stripped-down cousin of Concrete Blonde’s “Bloodletting (The Vampire Song).” Screamin’ Jay Hawkins could have done this one.

Two other standouts are the highly-caffeinated “Young Girls,” which reminds me of Barrence Whitfield & The Savages, and “The Hipster,” a ferocious cruncher built on a mutated “Everybody Needs Somebody to Love” guitar riff and incorporating some lyrics of “Wang Dang Doodle.”

I bet the Electric Slave song that gets the most airplay is “Come to My Party.” I hope a lot of new fans respond to that invitation. Black Joe Lewis always throws an amazing musical party.

And a little history for you, kiddies:
Talking Heads liked bubblegum when bubblegum wasn't cool