THE BLEEDING WALL OF TAOS 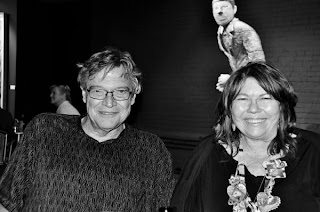 Here's an event early next month that's worth driving to Taos for: Terry and Jo Harvey Allen are presenting The Bleeding Wall of Taos which they describe as a "unique evening of music, poetry and tall tales of love, blood, mystery and adventure" for SOMOS Storytelling Festival.

They'll be doing this at the Taos Center for the Arts on Oct. 5.

Terry's been a favorite musician of mine for years. Here's a profile I wrote about him for the old No Depression magazine more than a few years ago. And here's my review of his latest album, Bottom of the World.

His wife, Jo Harvey is a major talent also. She's an actress, writer and performer of  one-woman shows. My favorite Jo Harvey role was that of "The Lying Woman" in David Byrne's movie True Stories. She also was the force behind Chippy, Diaries of a West Texas Hooker, a musical based on the actual diary Jo Harvey found at some Texas pawn shop or garage sale. (Terry showed me the actual diary once.) The 1994 album Songs From Chippy, which featured, the Allens, Joe Ely, Butch Hancock, Wayne Hancock, Robert Earl Keen and Jo Carol Pierce currently tops my list of criminally out-of-print CDs.

Terry and Jo Harvey will do the at the Taos Center for the Arts.

Tickets are $10 for the Storytelling Festival's StorySlam on Friday, October 4th, and $20 for the Terry and Jo Harvey Allen performance the next night. ($45 for a special VIP event on October 5th .This includes admission to the performance).

Tickets are available at the Taos Center for the Arts or at SOMOS at somos@somostaos.org. Please call 575-758-0081 for more information.