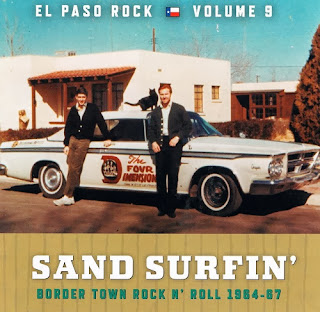 Two recent compilations from Norton Records hit close to home. Well, two or three hundred miles or so from home. El Vampiro, which is all instrumental surf rock from 1963 and 1964, and Sand Surfin’, which includes surf music as well as garage-band snot-rock from the mid-1960s, are the latest entries in Norton’s El Paso Rock series (Volumes 8 and 9, respectively).

The name of this series isn’t quite accurate. These “El Paso” albums include several New Mexico bands as well as labels and recording studios from our enchanted land. Indeed, these impressive collections provide a great introduction to the rock ’n’ roll side of three influential southern New Mexico record labels operated by giants of New Mexico’s musical history.

Let’s start off with Goldust Records of Las Cruces, which was owned and operated by Emmit Brooks, who still runs the Goldust recording studio, releasing more than 100 singles in its day. A 2011 profile in the Las Cruces Sun News noted that Brooks is a country musician himself, playing bass and singing with a touring band called The Aggie Ramblers from 1957 to 1975. Before he opened the studio, Brooks recorded an original country song called “Peach Blossoms” at Petty Studios in Clovis (most famous for recording the lion’s share of Buddy Holly’s hits).

Goldust was the home of a Las Cruces band called The Four Dimensions, which provides the title song of Sand Surfin’. It’s about the joys of riding plywood planks down the gypsum dunes of White Sands National Monument: “Down in the wastelands of New Mexico/Where there’s a definite lack of H2O/The kids get their kicks in this barren land/When they go surfin’ on pure white sand.”

In an interview for the website Garage Hangover a few years ago, Dimension Jack Starkey recalled his Goldust days. “We had a great relationship with Emmit, and he shared in the cost and profit of the record (I don’t think there was any profit). We backed other performers at the studio also.”

Goldust is also the label that released “Don’t Need You No More” by The Outer Limits, also on Sand Surfin’. The liner notes say the (unidentified) lead singer was frequently compared to Roky Erickson. I don’t hear 13th Floor Elevators in the song so much as I hear the melancholy folk rock of The Beau Brummels (“Laugh Laugh,” “Just a Little”). Though not included on the Norton compilations, Santa Fe’s Morfomen also recorded at least a couple of tracks for Goldust in the ’60s.

Starkey, in that Garage Hangover interview, also talks about hanging out with other Las Cruces and El Paso rockers of the day at The Lobby in Juárez, where he watched and undoubtedly picked up licks and tricks from bluesman Long John Hunter, who recorded with Yucca Records of Alamogordo.

A couple of years ago, Norton Records acquired Yucca’s entire catalog, including music that never saw the light of day. Nortonville’s blog describes Yucca as “a star in Norton’s ever growing constellation of able labels. Yucca’s output in the 1950’s and 1960’s is equaled by the number of world-class recordings that sat in the can for fifty years.”

It was headed by the late Calvin Boles, who, like Emmit Brooks, was a country musician. With a voice like Ernest Tubbs’, he played in a band called The Rocket City Playboys. Yucca recorded some great rock, country, and blues sounds in the 1950s and ’60s.

The best-known artist to record with Yucca was an El Paso singer named Bobby Fuller, who released two singles on the label in 1962. Not long afterward, Fuller would hit it big with “I Fought the Law.” Fuller’s music makes up the first three volumes in the El Paso Rock series. 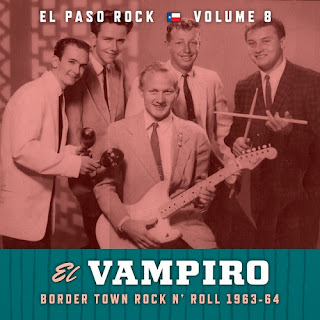 Among Yucca’s classics is a politically incorrect 1961 rockabilly single by Big Lloyd Dalton & The El Paso Trail Blazers called “Thees Plane Ees Mine.” It was inspired by Antulio Ramirez Ortiz’s hijacking of a National Airlines flight to Cuba that year, eight years or so before hijacking planes to Cuba became a national plague. Unfortunately Dalton’s song hasn’t yet been reissued by Norton. I hope they rectify that situation.

The other Yucca acts represented on these recent El Paso Rock compilations are: Steve Cooper & The Avantis, whose stinging 1966 instrumental “Sky Diver” is on Sand Surfin’; Las Cruces guitarist Chuck Sledge, who has three previously unissued instrumentals, including his version of “La Bamba,” on El Vampiro; The Pitiful Panics, whose low and slow “Why I Cry” on Sand Surfin’ is as full of teenage yearning as the title suggests; and The Fortunes, an Alamogordo band whose “Chi-Wa-Wa,” which is on El Vampiro, was a favorite of the late Steve Crosno, a DJ on the popular KELP station in El Paso (a religious station these days). Crosno used it as the background music leading up to the news breaks during his show.

Crosno was perhaps El Paso’s major go-to rock ’n’ roll figure of the ’60s. In addition to his radio show, he had an American Bandstand-like TV show in El Paso and promoted concerts in the area. And he’s also responsible for the third New Mexico label and studio to be featured on these albums, the slightly more obscure Frogdeath Records. Yes, decades before New Mexico had Frogville Records, it had Frogdeath Records.

Crosno, who died of cancer in 2006, operated Frogdeath out of his home in University Park (part of the Las Cruces area). Crosno’s goofy sense of humor was apparent in Frogdeath’s logo. It was a parody of RCA-Victor’s logo — Nipper the dog listening to “his master’s voice” on a Victrola. Frogdeath had a frog instead of a dog. And right above the poor creature’s head was a boot, apparently ready to stomp. 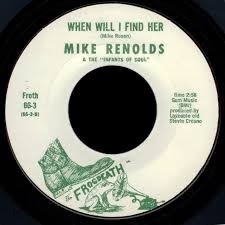 Sand Surfin’ includes the first Frogdeath single, “Wipe In” by The Imposters. This is basically a parody of The Surfaris’ hit “Wipe Out,” down to the crazy laugh that opens that record. (There’s another song on this album, “Bogus” by The Scavengers, which sounds like a slowed-down version of “Wipe Out.”)

Also on Sand Surfin’ is the instrumental “Mr. Big” by The Four Frogs. According to the liner notes of the album, one of the Four Frogs, Colin Flannigan, also has a song here — “You Came to Me,” a Beatles-ish rocker he recorded for a different label, Suemi, under the pseudonym Dave Caflan. Frogdeath also released “When Will I Find Her,” a fuzzy garage rocker by Mike Renolds (real name Reynolds) backed by The Infants of Soul.

And while its records weren’t released on Frogdeath, a Las Cruces band called The Key Men was produced by Crosno. The group’s instrumentals “Sun-Burstin’” and “Up to News” are on El Vampiro.

Southern New Mexico and El Paso are very rarely, if indeed ever, mentioned as major rock ’n’ roll meccas of the ’60s. But these compilations show that this area was bursting with crazy energy back in those daysin those days.

Here's some songs from those three New Mexico labels. There are some more Youtubes from Yucca Records on this old blog post.

Santa Fe musician Flash Swank sent me this anecdote after reading this column. I'm copying it here with his permission.

Sometime around 11 years ago I was working on a small job in Alamogordo. My rental car had a CD player, and I was coincidentally listening to Long John Hunter on what I believe was one of the early Norton records  “El Paso Rock” series. I had recently been exposed to Long John by seeing him at one of the free blues shows at the recently built Camel Rock Casino, and had purchased the CD after seeing a review in Vintage Guitar magazine.

One night I remembered that the tunes I was listening to were recorded in Alamogordo, and I reread the excellent liner notes on the Norton release. When I got back to the motel, I got out the phone book to see if Calvin Boles was still listed there. He was. I spent some time wondering if he would welcome a cold call from someone he had never met. His wife answered, and put Calvin on the line.


I opened with an apology for bothering him, but it turned out that he loved getting the call. He was in declining health and on dialysis, but loved talking about Yucca Records and the old days. He really got energized talking about music. When we were saying goodbye, he said he was going to warm up the garage and write some songs.