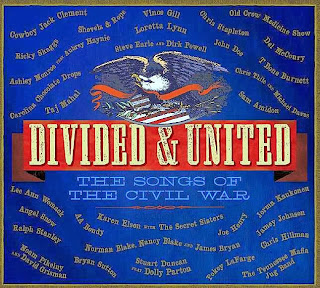 As terrible as the Civil War was, it was a very musical war.

Probably because of the movies and various documentary depictions that have become inseparable from that war in the popular mind-set, when you think about the Civil War, you’re likely to think of rousing marches, blue coats, and gray coats. Or perhaps you conjure up the image of a lonesome soldier sitting by a campfire at night playing sweet nostalgic songs of home on his old harmonica.

Or maybe you think of contemporary songs about the Civil War like The Band’s haunting “The Night They Drove Old Dixie Down” or Hank Williams Jr.’s shockingly clueless “If the South Woulda Won.”

While a few of the popular songs of 150 years ago have remained somewhat familiar, many have faded from memory. Producer Randall Poster has collected 32 Civil War-era songs from both sides of the Mason-Dixon line and rounded up a bunch of country, bluegrass, blues, and folk musicians for an impressive two-disc compilation called Divided & United: The Songs of the Civil War.

“Because of the richness of the music of the 1850s and 1860s, so much of it concerned with universal themes of longing, death, and liberty, experiences like that constantly recur on Divided & United,” writes historian Sean Willentz in the liner notes.

Although most of the tunes in the project deal directly with the war, some are just songs that were popular during that era, among them “Listen to the Mockingbird,” done by Stuart Duncan and Dolly Parton; “Wildwood Flower,” performed by Sam Amidon; and a heartbreaking “Lorena,” which was beloved by soldiers on both sides of the war, sung by bluegrass master Del McCoury.

A couple of the most popular songwriters of the war years are well represented. Stephen Foster songs include “Beautiful Dreamer,” sung by Cowboy Jack Clement (who died in August); an instrumental version of “Old Folks at Home,” by Noam Pikelny and David Grisman; and a heartfelt “Hard Times” by ex-Byrd/Flying Burrito Brother Chris Hillman.

But even more impressive are the songs of Henry Clay Work, who is far less remembered these days than Foster. Born in Connecticut, Work wrote songs for minstrel shows. But before you condemn him as a bigot, realize that he was an avid abolitionist whose parents’ house was used as a stop in the Underground Railroad for escaped slaves fleeing to Canada. His abolitionist views frequently come across in his minstrel songs. More on Work’s works later.

Loretta Lynn kicks off the album with “Take Your Gun and Go, John,” a song about a farm woman sending her husband off to battle. “Don’t fear for me nor the children, John, I’ll care for them you know,” she sings. It’s not only child care she’ll be dealing with, but heavy agricultural labor as well. “Ruth can drive the ox, dear John, and I can use the hoe.”

One of the few gung-ho, go-team songs here is “Marching Through Georgia,” written by Work and performed by Old Crow Medicine Show. It starts off sad and slow, but after one verse and chorus, it erupts into a joyful hoedown as the Yanks drive the rebels to the sea. From the Confederate side, there’s The Tennessee Mafia Jug Band’s upbeat “Secesh,” which is the story of a Southern kid excited about going to Shiloh. “I’ll put a rifle on my back and there I’ll be a soldier.”

But more typical for Divided & United are songs that take a hard look at war, songs like T Bone Burnett’s “The Battle of Antietam” (a song about two brothers on opposite sides in the war); Lee Ann Womack’s gut-wrenching “The Legend of the Rebel Soldier,” which deals with a Confederate soldier dying in a “dreary Yankee prison”); and John Doe’s “Tenting on the Old Campground,” in which the former X man sings, “Many are the hearts weary tonight, wishing for the war to cease/Many are the hearts looking for the right to see the dawn of peace.”

Steve Earle and Dirk Powell engage in a little historical revisionism in “Just Before the Battle, Mother.” The original version tells of a brave Union soldier proud to die for a noble cause. But in this version, the narrator remembers his mother’s advice that “discretion is the better part of valor,” and he deserts when he sees the Confederate army approach. Most of the songs deal with the soldiers and their families left behind — their hardships, horrors, and occasional joys.

There were others whose lives were turned upside down by the war — the slaves. A few, probably too few, selections in Divided & United tell those stories. Taj Mahal does a rousing version of “Down by the Riverside,” a spiritual known for its chorus: “I ain’t gonna study war no more.”

And there’s Work’s “Wake Nicodemus,” performed by the Carolina Chocolate Drops (under the title “Day of Liberty”). It’s about an old slave whose last dying wish was to be woken up when freedom finally came for the slaves. “He was known as a prophet — at least was as wise — for he told of the battles to come,” recites Chocolate Drop Dom Flemons. A longtime personal favorite is “Kingdom Come,” another Work tune, sung by Pokey LaFarge.

Sometimes known as “Year of Jubilo,” this is one of those classic tunes you’d probably recognize by its melody, if not the lyrics. It was used extensively in Ken Burns’ Civil War series, not to mention a couple of Tex Avery cartoons. Originally written for a minstrel show, this classic was meant to ridicule the white masters and overseers rather than the black slaves.

In the song, the master has been frightened away from the plantation by Union gunships. The slaves are celebrating, locking the cruel overseer in the smokehouse, throwing the key down the well, and helping themselves to the master’s liquor cabinet. “The whip is lost, the handcuffs broken, but the master will have his pay/He’s old enough, big enough, he ought to have known better than try to run away.” With the trumpet and military drums on LaFarge’s track, it’s easy to envision the Yankee army in pursuit of the fleeing plantation master

(Jubilation flashback: My favorite version of this song is by The Holy Modal Rounders, though they rewrote the lyrics. Both versions start out with the hated master “with the mustache on his face.” But in the Rounders’ hands you don’t see Lincoln’s gunships, you see Lincoln himself with “a piece of paper in his hand,” presumably the Emancipation Proclamation. “Abe Lincoln come, ha ha/Jeff Davis go, ho ho,” they sing.)

As is frequently the case with large-scale various-artist musical projects involving singer-songwriters, a few songs drift into the predictable and maudlin. But the duds are few and far between. Listeners who let Divided & United sink in can’t help but come away with a greater understanding of the Civil War and those it affected.