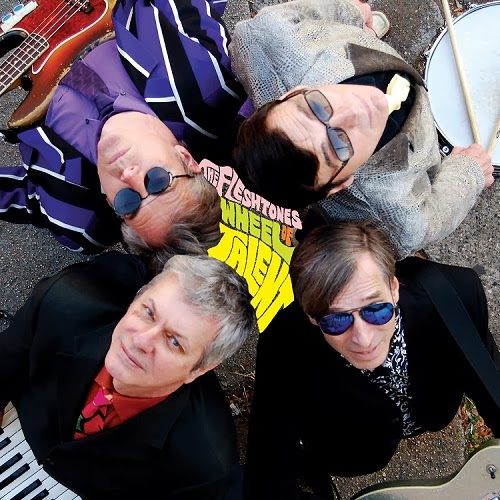 Having an adventurous spirit, when I get promo CDs from artists I’ve never heard of at KSFR-FM, if it looks interesting, I’ll consider playing a track on my radio show without listening to it first. But before I do this, I always check the credits to make sure there are no cellos. Seriously, with few exceptions, few instruments sap the rock ’n’ roll out of a song faster than a dreary cello.

So imagine my surprise when I popped Wheel of Talent, the new CD by The Fleshtones, into my car stereo only to strings — a cello and a violin, to be exact — on the very first song.

Actually, the strings on “Available,” which pop up later in the album on “How to Say Goodbye,” turned out to be more of a slight misstep, perhaps a jarring texture, than a deal-breaker. Wheel of Talent, produced by Detroit’s Jim Diamond, shouldn’t be seen as The Fleshtones’ attempt to channel Mantovani.

Despite Zaremba’s stint hosting an alt-rock show on MTV in the ’80s, Super Rock never got to be super famous. As they sing on the frantic, autobiographical “It Is as It Was” on this album, “We didn’t have a whole a lot of money/But we did what we wanted to.”

I love the classic Fleshtones sound, so my favorites here are hard-driving tunes like “What You’re Talking About,” “Roofarama,” and “Veo La Luz,” in which The Fleshtones go bilingual — it’s got a fuzz-heavy guitar (with a riff right out of The Yardbirds’ “Heart Full of Soul”) and Spanish lyrics. I wouldn’t be surprised if this were an outtake from their 2012 EP en Español, Quatro x Quatro.

(This song has apparently been in the band’s repertoire for a long time. Fooling around on YouTube recently, I stumbled across a 1988 live performance of the Fleshtones performing the English-language version, “I See the Light,” originally done in the ’60s by The Music Explosion.)

“Hipster Heaven” is a good-natured, fast-rocking poke at one of The Fleshtones’ favorite targets in recent years, the contemporary hipster (this one’s got “a new tattoo and money from home”). There’s even a decent tribute to The Ramones here with “Remember the Ramones.” (“You don’t know what it means/To hit the Bowery and make the Scene/For a rock ’n’ roller and a kid from Queens.”)

But, getting back to those cello songs, it’s obvious on Wheel of Talent that The Fleshtones are trying to stretch beyond their garage/punk roots. Recorded in Spain by renowned Spanish garage-punk producer Jorge Explosion, the strings on “Available” and “How to Say Goodbye” give those tunes a definite retro pop sheen. The former sounds like a rocking Fleshtones tune with some weird strings joining in, but the latter sounds like something that might have appeared on AM radio in the late ’70s (though it also reminds me a little of The Decemberists).

There are other tracks that also seem to be aiming for richer textures. For instance, on the classy “For a Smile,” guest vocalist Mary Huff (from Southern Culture on the Skids) sounds a little like Jackie De Shannon. “Tear for Tear” is a slightly jittery stab at the greasy early ’60 teen-pop sound. It made me think of Gene McDaniels’ “Tower of Strength.” And surprisingly good is the horn-fortified, soulful “What I’ve Done Before,” on which The Fleshtones sound closer to Van Morrison than they’ve ever come before.

Once I got (almost) used to the idea of The Fleshtones with strings and came to an uneasy peace with those songs, the only other track that bothered me was “The Right Girl,” which is sung in a phony British accent. If you’d told me that David Bowie was doing guest vocals here, I’d probably buy that story. Instead, I suspect this is some kind of in-joke among the band. But I don’t get it.

All in all, Wheel of Talent is a good album with a few bugs in it. It’s good to see The Fleshtones still willing to experiment. But next time, I hope they forget the fake English accents and the cello. 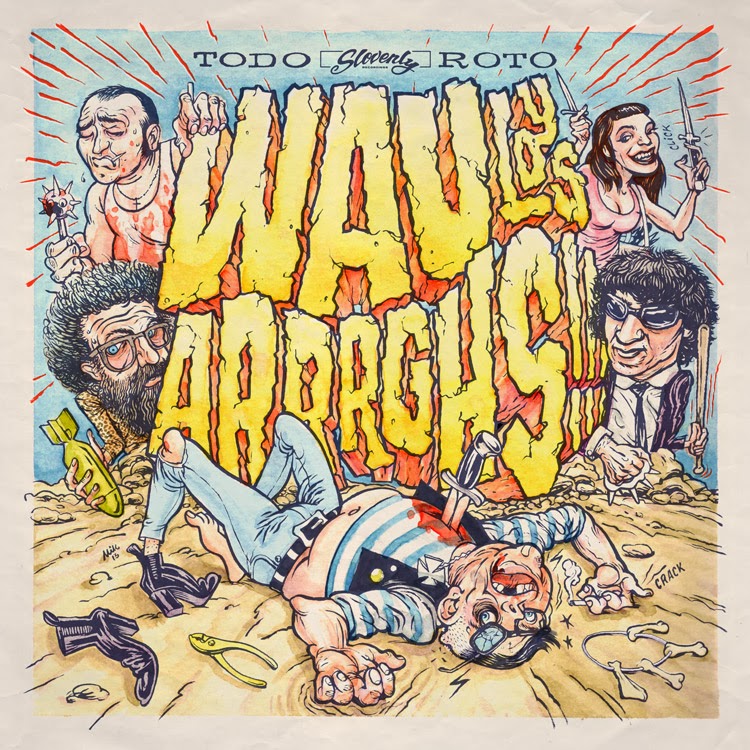 * Todo Roto by Wau y Los Arrrghs!!! Listening to The Fleshtones singing “Veo La Luz” made me hungry for some of the real stuff. Fortunately, the premier Spanish-language garage rockers of this era, Wau y Los Arrrghs!!!, released a new album not too many months ago. It’s produced by Jorge Explosion, who also produced The Fleshtones’ sessions in Spain. But no, Mr. Explosion didn’t bring in a string section for Todo Roto.

Led by singer Juanito Wau, this is a fuzz ’n’ Farfisa band (or it that a Vox organ?) that never lets up. Each song, it seems, rocks harder than the last one. Even the ones that start off slow tunes like “No Me Veras Caer” are permanently scarred by Wau’s crazy screams.

While Wau, naturally, is the focus of most of the tunes, his Arrrghs are a tight little unit. On the instrumental “Rescate Griego” they prove they could even be a pretty exciting surf band on their own. 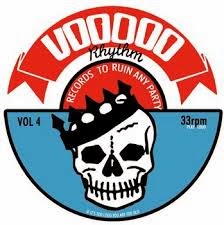 * Records to Ruin Any Party Vol. 4 by various Voodoo Rhythm artists. I first heard Wau y Los Cantan en Español, which was released on my favorite Swiss label — and in fact, one of my favorite labels anywhere, Voodoo Rhythm.
Arrrghs!!! on their first album,

How can you describe a Voodoo Rhythm collection to someone unfamiliar with the artists? Here, verbatim, is how label owner “Beat-Man” Zellar (better known as “Rev. Beat-Man”) explains it in his promo one-sheet. “This compilation may contains Dirty Words and way too Loud Guitars Trash Blues Garage Punk, overdriven Boogie Blues Folk and Weimer Republic 1920s Jazz Cajun and Pure Snotty One Man Band Trash Punk.”

Got that? The English is broken but the spirit is clear.

The sampler features label stalwarts like those German blues punks The Juke Joint Pimps, the Swiss garageman Roy and The Devil’s Motorcycle, New Zealand songwriter Delaney Davidson, and not one but two bands — The Monsters and Die Zorros — involving Beat-Man himself.

Among the artists on this collection that I’d never heard of before were Becky Lee and Drunkfoot, a one-woman band from Arizona that performs a slow, sad, pretty love song called “Old Fashioned Man”; The New Primitives, a South African garage band; and Heart Attack Alley, a New Zealand group whose sound might be described as neo-skiffle.

Voodoo Rhythm proves once again to be a virtual United Nations of trash rock. Which is why I love them.

First, a recent live clip from The Fleshtones

Here's that old clip of "I See the Light" in English