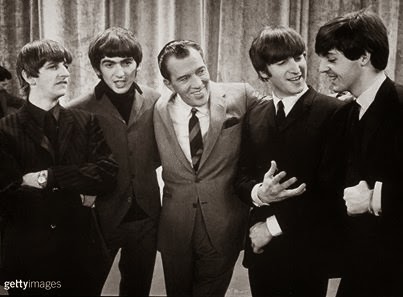 Many people tell me I remind them a lot of John Lennon. The three major reasons are: (1) Like Lennon, my uncompromising idealism and sharp wit often get me in trouble; (2) I think I’m bigger than Jesus; and (3) I began my career entertaining sailors onstage with a toilet seat around my neck.

No, not really. In real life, nobody ever tells me I remind them of John Lennon. Not even Ringo. Truth is, I just wanted to start this column with a joke instead of melancholy, nostalgia, and reverence — which is what I felt when I was driving last Sunday and heard a radio report about the 50th anniversary of The Beatles appearing on The Ed Sullivan Show.

I’m far from the first to observe this, but it’s true that The Beatles arrived at a perfect time for America — less than three months after the assassination of President Kennedy. In a spiritual sense, the moment Paul McCartney opened his mouth to sing “Close your eyes and I’ll kiss you, tomorrow I’ll miss you” was the moment the national mourning for JFK ended. And a new era began.

I’m an old baby boomer, but I’m not one of those old baby boomers who wistfully thinks The Beatles were the alpha and the omega of popular music. Even back then, as the British Invasion unfolded, I loved The Beatles, but I loved The Animals even more. (I thought Eric Burdon and crew were even uglier than The Rolling Stones, and to an ugly kid, that was important.)

And I was disappointed the week after the Sullivan show when “I Want to Hold Your Hand” knocked The Trashmen’s “Surfin’ Bird” off the No. 1 spot on my local radio station’s Top 50. The Trashmen were robbed, just like poor Fred Kaps, the hapless Dutch magician who followed The Beatles on Sullivan’s show that week with a card-trick act.

But it’s hard to underestimate the significance of the rush of optimism and joy we felt in this country on the night the four lovable mop tops performed on television. The Beatles, during their (mercifully short) Maharishi period, would help make “mantra” a household word in the West, but that night in 1964, America had a common mantra: “Yeah, yeah yeah.” And it was far more cosmic than anything the Maharishi ever gave us.

Historical flashback: On the morning of Nov. 22, 1963, CBS Morning News aired a short feature from its London bureau about a band called The Beatles that was driving the kids wild over there. It had footage of the group singing “She Loves You,” complete with screaming girls. Newsman Alexander Kendrick said in the report, “Besides being merely the latest objects of adolescent adulation and culturally the modern manifestation of compulsive tribal singing and dancing, The Beatles are said by sociologists to have a deeper meaning. Some say they are the authentic voice of the proletariat.” Kendrick’s report was supposed to air that night on the evening news as well. But it was preempted by news of a certain murder in Dallas that occurred that afternoon.

Some say that Feb. 9, 1964, was the night that “youth culture” was born. Maybe so, but the first thing I thought of while listening to that radio report Sunday was my grandfather. He was there with us that night watching Ed Sullivan. I’m not sure whether Papa actually liked The Beatles’ music, but he sure got a kick out of them. For months afterward, anytime a friend would come over to the house, he’d ask, “What do you think of those long-haired boys from England?” (He was 60 years old then. I’m 60 now, and here I am talking about those long-haired boys from England.)

Not surprisingly, back in those crew-cut days, The Beatles’ hair seemed to fascinate a lot of people. But watching them that night, my biggest surprise wasn’t the long hair; it was their white faces. The radio had been playing “I Saw Her Standing There” — still one of my favorite Beatles songs — and “I Want to Hold Your Hand” — still one of my least favorites — in the days leading up to Sullivan’s show, and I just assumed The Beatles were a black R & B band.

One thing The Beatles had going for them is that virtually everyone back then watched Sullivan’s show — at least that night. Only three major networks were on TV. (Any old-timers out there remember what was showing on NBC and ABC that night?) Today there are dozens of networks — and surprisingly little music on any of them. (“57 Channels and Nothing On,” as Bruce Springsteen sang.) Meanwhile, music fans are fragmented into hundreds of little tribes.

Since the murder of John Lennon in 1980, I rarely listen to The Beatles. The songs are all so etched in my mind that it’s almost as if I don’t need to listen anymore. I didn’t go nuts when they first released The Beatles on CD or when the corporate hacks who own their music these days finally released their material on iTunes. I thought those “lost” Beatles songs “Free as a Bird” and “Real Love,” released in the 1990s, should have stayed lost.

I did, however, buy the DVD set The Four Complete Historic Ed Sullivan Shows Featuring the Beatles about 10 years ago. As soon as I get done writing this, I think I’ll watch it again, if only to try to figure out how Kaps worked those cards.

As you can surely tell, the anniversary opened a floodgate of memories for this old rocker. While music groups are routinely hyped today with an intensity that makes Brian Epstein and even Col. Tom Parker look like amateurs, no other rock ’n’ roll band and no other pop singer has had the cultural impact The Beatles did. Plenty of good music is still being made, but nobody has come close to The Beatles’ stature in their heyday. I hope someone eventually proves me wrong, but I don’t think anyone ever will.