It was about 6:30 p.m. Saturday and I was teetering on exhaustion. I'd had perhaps 10 hours of sleep over the previous three nights -- which is fairly typical for me during SXSW. (Those of you who have read the typo-laden gibberish of my previous SXSW posts probably suspected as much.) I was coming down with some kind of cold. And the thought of driving back to Austin was filling me with dread. You see, I screwed up this year and made my motel reservations late. By the time I started looking there were no rooms left in Austin for less than hundreds of dollars a night.

And even worse, I wasn't even sure what I wanted to go see. Cheetah Chrome was playing on what looked like a decent bill at The Saxon Pub, but that's a pretty small place and I was afraid of driving all the way there only to get spurned at the door.

But looking at Facebook, I noticed a show I'd forgotten about: : The Hickoids, The Grannies, A Pony Named Olga and The Beaumonts at a bar I'd never been to called the Triple Crown. And I almost shed tears of joy when I saw it was in San Marcos. A five minute drive from my motel! Suddenly, I was re-energized and ready to rock 'n' roll.

I'd seen The Hickoids earlier in the week over at The White Horse on Austin's east side, right after they got inducted into The Austin Music Hall of Fame.

But while the set they played in San Marcos wasn't completely different than the one they did at the White Horse, the group's repertoire is so big there were several tunes I hadn't heard at the earlier gig, including "If Drinkin' Don't Kill Me, Kill Me" and "Talking Hot Pants Blues" from their latest album, Hairy Chaffin' Ape Suit and their cover of "Brontosaurus" ( originally done by The Move). Plus, Jeff Smith's lengthy shaggy-dog spoken-word part of the despicably obscene and always enjoyable "Stop It, You're Killing Me" was a completely different story than the one on the record and past live versions I've seen. My only complaint is that they didn't do my favorite "Cool Arrow" at either of the shows I saw. But the band played something like nine shows during SXSW, so for all I know, they played it at all their other gigs.

While it was fun hanging out backstage with The Hickoids at the Austin Music Awards Wednesday (and yes, I did enjoy seeing Lucinda Williams perform there), I was disappointed that I missed The Grannies when they played the White Horse right before The Hickoids set. I'd seen these San Francisco punk vets my previous SXSW trip in 2012.

Appearing in full Granny regalia -- colorful wigs, horrible frocks and muumuus -- the band just tore up the joint. They attack the music with humor as much as fury. Singer Wizard Sleeves was wearing some kind of flesh-colored body suit, with elongated drooping breasts, which the audience discovered when he took off his dress, and came out into the crowd twirling his fake mammaries. And guitarist Sluggo ended his set with a classic-rock guitar smashing demonstration.

The other acts were a lot of fun too. A Pony Named Olga is a high-energy psychobilly (they call themselves "country-punk and polkabilly") trio from Berlin, featuring an electric guitarist/singer, a doghouse bass and drummer. They have basics of the genre down pat, but they also have a few unusual melodies and chord changes that bring a twist to that basic sound. 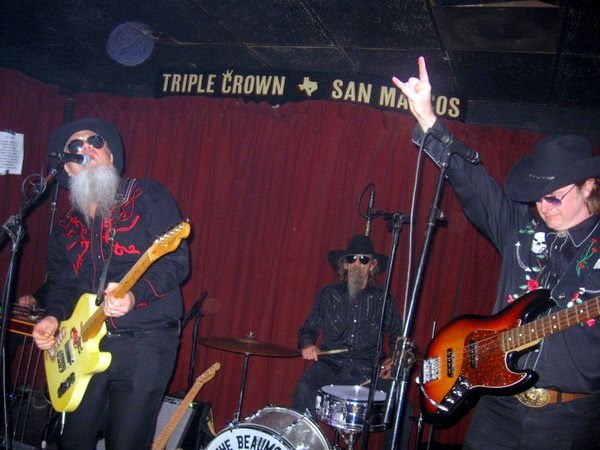 And then there's The Beaumonts, a tight little honky-tonk band from Lubbock led by singer Trow Wayne Delco that plays sweet country music with foul-mouthed lyrics about sex and drugs and getting drunk and more sex. But that's not all. They also have a song called "Toby Keith," in which they declare that the jingoistic country star is the "ugliest woman I swear I've ever seen" and compares him with a muskrat in a mini-skirt. Apparently Delco is still riled -- and rightfully so -- about the way Keith treated Natalie Maines, a fllow Lubbockite -- after she denounced President Bush at the outsewt of the Iraq war.

This show was the perfect way to cap off a great week of music.