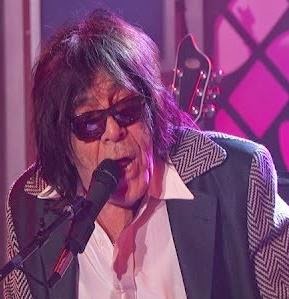 I was privately grieving David Letterman's announcement of his pending retirement a few nights ago when I suddenly realized: Hey I haven't actually watched Letterman's show, except for a few stray Youtube clips, in years!

In fact, that goes for Leno even more, as well as just about every late-night gab show. I still haven't seen the new Jimmy Falon (I stopped watching SNL because I hated the way he always giggled at his own jokes) or Seth Meyers shows. Come to think of it, I basically agree with this recent article in Slate. So wipe away those crocodile tears!

However, last night I sat through the entire Jimmy Kimmel show. Not for Johnny Depp or the lady from Mad Men, but for Chuck E. Weiss. That's right, Chuck E. was on national TV! He's got a new album called Reds Beans and Weiss his first since 2006, coming out next week.

Anyway, I loved his new song "Boston Blackie" from that album. Maybe you will too. And that's former Santa Fe resident and former member of X and Lone Justice) Tony Gilkyson on guitar. Check it out below.

(UPDATE: This video can no longer be embedded. But you can watch it HERE)