A version of this was published in The Santa Fe New Mexican
April 25, 2014 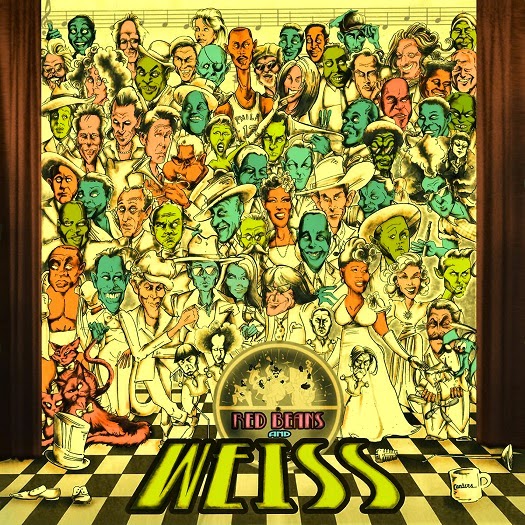 Deal the cards, roll the dice, if it ain’t that old Chuck E. Weiss.

That’s right, the craggy-faced, mop-topped hierophant of the hipster underground (and yes, kids, I’m using the original connotation of “hipster” and not the pathetic thing it’s turned into) is back with a new album called Red Beans and Weiss, and it’s full of stripped-down rock ’n’ roll, R & B, blues, laughs, post-beat cool, hard-earned wisdom, and flashes of sheer insanity.

Most people my age probably first heard of Weiss in 1979 when he popped up on the edges of the national consciousness as the unlikely romantic lead in Rickie Lee Jones’ first hit, “Chuck E.’s in Love.”

Of course, those of us who were Tom Waits fans back then had known the name for years. Waits name-checked him on the song “Nighthawk Postcards (From Easy Street)” on the album Nighthawks at the Diner — which also contains the song “Spare Parts I: A Nocturnal Emission,” which Weiss co-wrote — and waxed nostalgically for his company in “I Wish I Was in New Orleans (In the Ninth Ward)” on Waits’ album Small Change.

Weiss, Waits, and Jones got to be pals in the ’70s when they lived at the infamous Tropicana Motel in Hollywood. But Weiss had already established a music career. As a teenager in Denver, he used to hang out at the Ebbets Field blues club, eventually becoming the drummer for the house band.

The band backed bluesman Lightnin’ Hopkins one night, and Hopkins was apparently so impressed that he hired Weiss as his tour drummer. Eventually Weiss played with some other major names in American music including Muddy Waters, Howlin’ Wolf, Dr. John, and former Tesuque resident Roger Miller.

Unfortunately, his recording career can only be called sporadic — and that’s being charitable. His first album, The Other Side of Town, didn’t come until 1981, two years after “Chuck E.’s in Love,” and that was a bunch of demo tapes reportedly released against his will. (I recently listened to it on Spotify, and it’s good stuff. Dr. John plays keyboards on it, and Larry “The Mole” Taylor, an original member of Canned Heat who played with Waits for years, is on bass.)

As with all his works since Extremely Cool, on Red Beans Weiss is backed by his cronies, a tough and tight band known collectively as The Goddamn Liars — which includes former Santa Fean Tony Gilkyson, who has played with X and Lone Justice, on guitar.

The album kicks off with a rowdy rocker called “Tupelo Joe,” on which Weiss alternates between a gravelly baritone and a comical mock-doo-wop voice. He milks the idea that “Tupelo Joe went to the show ... Tupelo Joe ain’t no schmo” for all it’s worth, and it sounds wonderful. The pace slows down immediately for “Shushie,” a beatnik-jazz excursion with sax and standup bass.

This is followed by a slow-burner called “Boston Blackie.” Here, Weiss proclaims himself to be just like the old TV detective, a “friend to those who have no friends.” Weiss and band did this tune on a recent episode of Jimmy Kimmel Live. In the middle of the song, Weiss’ old friend Johnny Depp came out with a guitar.
Weiss and his Liars get funky on “That Knucklehead Stuff” (”I’m sittin’ on a stool tryin’ to be cool, tryin’ not to show any interest/Heard this snickering sound, and my body shook the ground, and I knew the stuff had no limits./The knucklehead stuff”).

Then they take an inebriated detour to the barrio for “Hey Pendejo,” which I’ll nominate for the greatest pseudo-Mexican tune by gringos since The Pogues’ “Fiesta.” ( This would have made a great campaign theme last year for unsuccessful Albuquerque mayoral candidate Pete Dinelli.)

The sole cover song on the album is “Exile on Main Street Blues,” which was an outtake recorded by the Rolling Stones during their Exile on Main Street sessions. It’s full of the titles of and cheesy allusions to songs on their greatest album. But I bet the Rolling Stones wish they had done the stomping blues rocker “Dead Man’s Shoes,” which Weiss co-wrote with Gilkyson.

For sheer tomfoolery, Weiss goes for the goofy gold in “Willy’s in the Pee Pee House.” I’m assuming this refers to prison. On this crazy little New Orleans-soaked singalong, the Goddamn Liars sound like Professor Longhair’s band at the end of a three-week bender, while Weiss sings in an exaggerated Buck Owens-on-Quaaludes drawl. But it works. (And yes, that is the Rocky and Bullwinkle theme you hear on the piano at one point. I’m just not sure why.)

But for all the good-time craziness, one song on Red Beans is dead serious. That’s “Bomb the Tracks,” a crunchy rocker in which Weiss sings, “Why didn’t you bomb the tracks, Jack/Why didn’t you stop the train, James.” To be sure, the song contains some surreal imagery: FDR in Maine “doing the boogaloo chicken,” Joe Stalin drawing “futuristic pictures of Huckleberry Hound,” and whatnot.

In a recent interview on his  publicist’s website, Weiss talked about what the song means to him:

“I’m the first generation born after the war, and one of the first things I ever learned in life was that Hitler had killed members of my family. ... When I was about 17 or 18 it occurred to me that, okay, these trains are going down the tracks to the death camps, and Russia and the U.S. and England have planes, so why didn’t we bomb those tracks? So trains couldn’t get to death camps. ... What really started to bother me as a much older person was to make a god out of Roosevelt. To the Jews, Roosevelt was God, bigger than Al Jolson, man. Know what I’m saying?”

You got to watch those finger-poppin’ daddies. Sometimes there’s some sharp insights hiding in their happy fog of jive.