A version of this was published in The Santa Fe New Mexican
April 11, 2014


Here’s a look at some albums by local, or pretty-close-to-local musicians I’ve been enjoying in recent weeks (and some I’ve gotten my hands on only in recent days.) 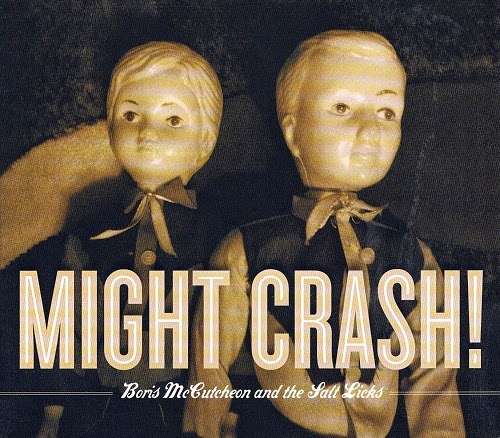 * Might Crash! by Boris McCutcheon & The Salt Licks. I’ll get right to the point: this is the best Boris album in years. Maybe even his best yet, though I’ve still got a real fondness for Cactusman Versus The Blue Demon from 2005.

McCutcheon is a decent singer but an even better songwriter, and some of the tunes on Might Crash! immediately knocked me in the head. I’m talking about “Booze Farm,” a drunken, bluegrassy fantasy featuring Salt Lick Brett Davis on banjo. “Come on girl, let’s start a booze farm,” he sings. McCutcheon’s bio says he has made a living as a farmer, but it doesn’t say whether or not he’s been a booze farmer.

The title song flirts with rockabilly as well as Roger Miller. “How do you know when you might crash? Do you get that look in your eye? Do you start getting ugly with your kids? Do you start hatin’ your life?”

“This Town Is Dead,” co-written with McCutcheon’s Frogville Records crony Bill Palmer (who co-produced Might Crash!) is a slow, pretty country lament about stagnation. “Dirty needles floatin’ down the ditch/I’m stuck in limbo with a traveling itch,” McCutcheon moans. “This casino sucks, I want my money back.”

But the real showstopper on this record is a near-five-minute foreboding dirge called “Off the Grid.” It’s a portrait of some Northern New Mexico residents who live “up the mountains, over the cliff and off the grid” among “shattered panels and some old golf-cart batteries from the '70s.” McCutcheon sings as if he’s stumbled upon some post-apocalyptic world: “They’re all hiding up here, they’re all hoping the world will end.” The singer doesn’t exactly condemn what he sees, but he doesn’t romanticize it, either. 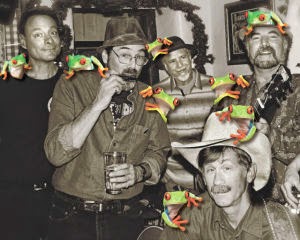 * Live Frogville Sessions by Country Blues Revue. Like the title says, this album, the second by this group led by singer/guitarist Marc Malin and harp tooter “Harmonica” Mike Handler was recorded live
before a studio audience at Frogville Studios in Santa Fe. I was planning on attending one of the two nights it was recorded last December, but something came up and I didn’t. I suspected this would happen, and indeed it did: listening to the CD makes me regret missing this party even more than I already did. The album is full of foot-stomping, good-time American music, predominantly blues but with lots of New Orleans-style R & B, some Dixieland, and, yes, a little country mixed in.

Though it normally operates as a quartet, for the Frogville session the CBR grew into a small army, with a horn section, Brant Leeper on piano, David Barclay Gomez (of Felix y Los Gatos) on accordion, and Dave Devlin on steel guitar. On a few tunes there are some out-of-town guests: Roberta Donnay and Daria, The Lickettes in the most recent incarnation of Dan Hicks & The Hot Licks. They’re at their Lickettiest on the songs “I Can’t Give Up on You” and “The Writing Is on the Wall.”

At this writing, my favorite tune is “Sleight of Hand,” a primitive blues that features a guitar hook similar to Howlin’ Wolf’s “Smokestack Lightning” and a slightly muffled sound that suggests it’s coming from an old AM car radio on some dark and lonesome backwoods road. 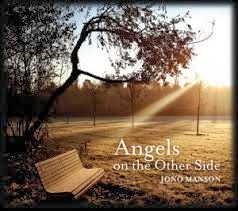 * Angels From the Other Side by Jono Manson. For the last 20-plus years he’s been in Santa Fe, Manson’s basic music attack has not changed much, and that’s definitely not a bad thing. With a Jono album, you always can count on listenable, frequently catchy tunes — some of which stick in your brain for hours at a time — sturdy blues rockers, sweet, soulful ballads, and maybe a little country. This album is no exception.

Listening to Angels in my car on a long drive recently, it occurred to me that, unlike so much of the other music I like, there is little if any darkness on this album. And while it’s certainly not devoid of humor, there is not much at all in the way of underlying irony or sarcasm. The lyrics are pretty much all straightforward and sincere. And most of it is outright happy. It was pretty refreshing, actually.

That being said, one of my favorite songs here is the saddest one on the album. “The Frame” is about some kind of family tragedy, the details of which are left to the listener’s imagination. It starts out with the narrator looking at an old photo of a happy young couple with a little girl. “No one was to blame, but everything was changin’/I guess you wouldn’t know, because the picture doesn’t show what’s just outside the frame."

“Angelica” is a strange ode to a singer’s guardian angel/muse, “a tired angel behind these eyes,” while “Honky Tonk in My Mind,” despite its title, isn’t really a country song. It’s an upbeat bar-band rocker on which Manson laments, "I can’t forget you but I bet you never would have left me if only you had met me in the honky tonk in my mind.” But if it’s “country” you want, there’s “Together Again” – no, not the Buck Owens hit. It’s a song about a family reunion with some tasty mandolin by former Santa Fe resident John Egenes. And unlike so many songs of this ilk, this family isn’t dysfunctional. 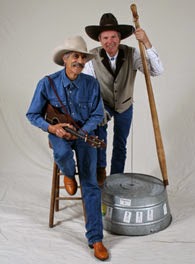 * Blue Horizon by Sid Hausman & Washtub Jerry. I’ve been a fan of Hausman’s music for more decades than either of us would want me to say. Hausman is a poet and a picker (who in recent years has become a strong partisan for the tenor ukulele as well as the guitar and banjo) with a fondness for Western swing and songs from singing-cowboy cinema.

Indeed, if Hollywood still made such movies, Hausman could be a singing-cowboy star. He’s got the look, and the music comes natural to him. In fact, some of the best songs on this new album have cowboy-movie roots. “Ridin’ Down the Canyon” was written in 1934 by Smiley Burnette (“Gene Autry’s sidekick,” the liner notes explain), while “Grand Canyon Trail” and “Night Time in Nevada” are from Roy Rogers movies. My favorite song here, however, is a Hausman original called “Only in Texas.” Hausman sings, “Now only in Texas, rattlesnakes have highway exits." Ace fiddler Ollie O’Shea, who plays on several songs on the album, really shines on this one.

One slight quibble: “The New Ragtime Cowboy Joe” basically is the same as the old “Ragtime Cowboy Joe,” except that the “son of a gun from Arizona” has been transformed into a “buckaroo from New Mexico.” Come on Sid, you’re messing with sacred scripture here!

Hear this music on the radio: I’ll be playing selections from the albums by Boris McCutcheon, Country Blues Revue, Sid Hausman & Washtub Jerry, and Jono Manson on The Santa Fe Opry, which starts at 10 p.m. Friday on Santa Fe public-radio station 101.1 KSFR-FM and streaming at www.ksfr.org.
at April 11, 2014