A version of this was published in The Santa Fe New Mexican
May 30, 2014 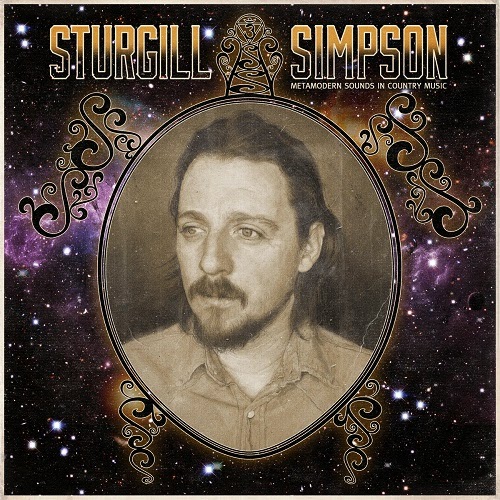 Metamodern Sounds in Country Music, the second solo album by eastern Kentucky native Sturgill Simpson, surely is one of the strangest country-music albums I've heard in a long time. It's also one of the most authentic sounding new country albums to cross my eardrums in a long while — even though there are a couple of spots where the music drifts from its sturdy '70s outlaw foundation into raw psychedelia.

And yes, I consider this “authentic country” even with lyrics like, "reptile aliens made of light cut you open and pull out all your pain" and open references to marijuana, LSD, psilocybin, and DMT. And that’s just in the first song.

But Simpson is not some smirking, wise-guy cowpunker mocking the hicks. Nor is Metamodern Sounds a (meta) modern version of those laff-loaded redneck novelty songs of the late '60s, in which country singers made fun of hippies, long hair, protests, love-ins, funny cigarettes, etc.

No, the metaphysics-minded Simpson has a healthy imagination, but this is earnest stuff. His reptile aliens come straight from the heart. He's a true hillbilly visionary, and he's got some serious things to tell us.

So who is this guy?

Simpson was born in Kentucky in the late '70s and spent part of his youth in the Pacific Northwest. ("Met the devil in Seattle, spent nine months inside the lion’s den,” he sings on the new album.) He served in the U.S. Navy and actually worked on the railroad — reportedly, all the livelong day. He fronted a band called Sunday Valley until he went on his own a couple of years ago.

Last year Simpson released a highly acclaimed album called High Top Mountain, which included some fine original tunes as well as an inspired cover of the late Steve Fromholz's "I'd Have to Be Crazy."

Listening to that song, the best-known version of which was by Willie Nelson, it's not hard to figure why it would appeal to Simpson. "I know I've done weird things/I told people I heared things st says stet/When silence was all that abounds .... And I'd have to be weird/To grow me a beard/Just to see what the rednecks would do."

Indeed, on the opening track of Metamodern Sounds, "Turtles All the Way Down" (which has a melody that sounds like it came straight out of the Kris Kristofferson songbook), Simpson takes the weirdness a lot further than growing a beard. This is the reptile aliens/psilocybin/DMT song. The backwoods cosmology here also includes Jesus, Buddha, and Satan. All in all, it’s a few galaxies beyond drinkin' beer, drivin’ your pickup, and salutin' the red, white, and blue. Let’s see what the rednecks will do about this.

"I expected to be labeled the 'acid country guy,' but it's not something I dwell on," Simpson said in a recent interview with NPR. "I would urge anyone that gets hung up on the song being about drugs to give another listen ... to me 'Turtles' is about giving your heart to love and treating everyone with compassion and respect no matter what you do or don't believe.”

Peel off the layers of cosmic debris and the song boils down to the line, "Love's the only thing that ever saved my life." The conclusion he reaches is that after all of his experimentation with drugs, religion, philosophies, and truth-seeking, real salvation comes from simple love and kindness, not the “nursery rhymes,” and “fairy tales of blood and wine” and other distractions.

Not that Simpson is taking a “just say no” stance, by any means. In fact, he’s quite unapologetic. As he sings in the refrain of “Life of Sin,” one of the rowdier honky-tonkers on the album, “every day I'm smoking my brain hazy/All I can do to keep from going crazy/But the paranoia is slowly creeping in/I keep drinking myself silly/Only way for this hillbilly/And I thank God for this here life of sin.”

But don’t worry. The voices Simpson’s hearing in “Voices” aren’t of the hallucinatory nature. They’re the prattle of politicians, preachers, and assorted hucksters: “Voices behind curtains, forked tongues that have no name.”

And even though religious dogma doesn’t offer much to Simpson, it’s clear he finds value in the essence. In “A Little Light Within,” a rousing little gospel-influenced tune, he sings, “Don't need nothing but a little light in my heart/Glowing inside me like a blanket of love.”

This album is most subversive when the music itself veers toward the land of reptile aliens.

The nearly seven-minute “It Ain’t All Flowers” starts with a short burst of sonic exploration with a growling guitar and fun with a phase shifter. The picking of an acoustic guitar signals that Simpson and band are about to get down to the real song, a swampy little groove with lyrics that deal with “cleaning out the darkest corners of my mind” and “dancing with demons.” The guitars keep getting crazier and crazier. About halfway into it, Simpson lets loose with a bloodcurdling scream. The last couple of minutes of the song are basically a journey to the center of the mind.

And yet this singer is quite capable of a good, simple love song. “The Promise” — a cover of a song by an obscure group from the New Wave era called When in Rome — is done as a slow, soulful apology and a pledge of undying love served in a heartbreakingly beautiful melody. And Simpson’s not even above a little old-time country nostalgia. In “Pan Bowl,” the unlisted “bonus” track, he recalls a home out in the country, visiting his Uncle Everett and his great grandma: “I’d give anything to go back to the days I was young ... wild as a rattlesnake right from the start.”

“The dirt don’t hurt the way I sing,” Simpson proclaims in one song. And he’s right. He sounds down to earth even when you might think he’s lost in space.