A version of this was published in The Santa Fe New Mexican
July 18, 2014 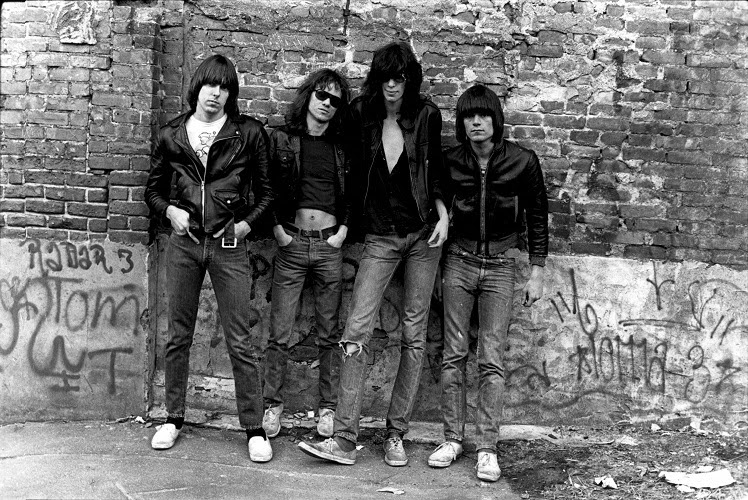 Four out of five Rolling Stones who appeared on the band’s first album are still alive. Half of The Beatles, half of The Who, and half of The Velvet Underground are still with us. All of the Sex Pistols except Sid Vicious still walk the earth.

And yet all four of the original Ramones have died. Last week Tommy Erdelyi — a native of Hungary who became the group’s first drummer after a short stint as its manager — died of bile duct cancer. Cancer took Tommy, Joey, and Johnny. Drugs got Dee Dee. Horrible, miserable demises for musicians whose work was so full of joy and crazy energy. All the Ramones who played on those first three albums — Ramones, Leave Home, and my favorite, Rocket to Russia; the four guys who gave the world songs like “Cretin Hop,” “Sheena Is a Punk Rocker,” “We’re a Happy Family,” “Beat on the Brat” — all are gone.

I got to see them in person only once. That was back in July 1996 (nearly 20 years after Tommy had left the band and long after Dee Dee left as well). This was at a Lollapalooza festival, and they weren’t even the headliners.

The Ramones sounded fine, but it was not a pleasant show. Brutal is too kind a word for the 107-degree Arizona heat that day. And worst of all, The Ramones’ set was cut short by a vicious windstorm. Joey Ramone had joked onstage about the venue — a horrible, dusty desert hellhole known as Compton Terrace — being built on an ancient pet cemetery. (This of course was right before the band launched into its song “Pet Sematary,” from the horror movie adapted from the Stephen King novel.)

Soon after Joey’s little joke came the dark clouds and the blasting winds. The stage lights and sound monitors suspended above were swaying ominously. I wrote in my review of the festival, “While it might be the cool rock ’n’ roll way to die, being crushed by a giant speaker in front of a cheering mosh pit, that is not the way Joey planned to say adios, amigos.”

According to the website setlist.fm, the Ramones made it through 16 songs that day in Arizona. At most other Lollapalooza shows they did 21. So maybe we were cheated out of only five songs. At least I got to see them do “Blitzkrieg Bop,” “I Wanna Be Sedated,” “Teenage Lobotomy,” and their cover of the Spider-Man theme song, a latter-day Ramones favorite.

That would be the group’s last tour. Joey died five years later. Johnny soon followed, as did Dee Dee. And now, Tommy.

The influence of the Ramones on rock ’n’ roll in the past 40 years cannot be underestimated. Although the punk rock movement they helped spawn definitely had its own excesses, it was a much-needed corrective force for popular music in the mid- to late ’70s.

In fact, whenever rock ’n’ roll gets too heavy and serious and self-important and gloomy, the musicians behind it should ask, What would The Ramones do?

In recent years, at least three songs about that very concept have popped up. In 1999 a band called The Huntingtons recorded “What Would Joey Do?” in which they asked what he’d do “about the state of rock ’n’ roll.” (They also did an album of all Ramones covers.) More recently, The Creeping Ivies recorded “What Would Joey Ramone Do?” which airs similar complaints about lousy radio and TV. And just a few years ago, a friend of a friend, a guy named Scott Orr, had a stripped-down lo-fi tune called “WWJD.” (It’s about Joey, not Jesus.)

But these are only a small subgenre of songs about The Ramones. Here are my favorite Ramones tribute songs by musicians who felt they owed something to those oddballs from Queens.

* “R.A.M.O.N.E.S.” by Motörhead. Lemmy Kilmister’s big blasting tribute to the brothers first appeared on Motörhead’s 1916 album in the early ’90s. The Ramones liked it so much that they recorded two versions of it themselves.

* “I Heard Ramona Sing” by Frank Black. This tune, on Black Francis’ first solo album, Frank Black, is a sincere tribute, even though it sounds a lot more like The Pixies, which had just broken up, than the Ramones. It tells of a young guy’s first encounter with the boys from Queens: “I had so many problems/Then I got me a Walkman ... I heard Ramona sing, and I heard everything.” By the end of the song, Black expresses the hope that The Ramones keep replenishing themselves like a certain Puerto Rican boy band of that era: “I hope if someone retires/They pull another Menudo,” he sings. If only …

* “I Wanna Be Your Joey Ramone” by Sleater-Kinney. This 1996 ode appeared on Sleater’s Call the Doctor album. Singer Carrie Brownstein wants to be your Joey — “Pictures of me on your bedroom door,” that is — but halfway through the song she also wants “to be your Thurston Moore.” What gives here?

* “Dancing With Joey Ramone” by Amy Rigby. Another song specifically about the singer of the band, Rigby’s is a bittersweet, rocking fantasy that was released on her Little Fugitive album a few years after Joey’s death. “I tried to say something, he said, `Girl, shut your mouth, they’re playin’ ‘Papa Was a Rolling Stone' ’/Last night I was dancin’ with Joey Ramone.” The lyrics include a great playlist with such venerated oldies as “The Worst That Could Happen” by Brooklyn Bridge, “He Hit Me and It Felt Like a Kiss,” “Glad All Over,” and “Needles and Pins.” (The Ramones themselves covered that last Jackie DeShannon classic.) I’m sure Joey would have loved to dance to any of those.

* “Our Ramones” and “Ramones Forever” by The 99ers. Yes, this Minnesota band has two different songs on two different albums celebrating Mama Ramone’s baby boys. I prefer the latter one, which is from the 2011 album Everybody’s Rocking.

* “Remember The Ramones” by The Fleshtones. Released earlier this year on The Fleshtones’ most recent album, Wheel of Talent, this rouser is a sweet tribute from a fellow New York band that started out at about the same time as The Ramones. It’s with complete sincerity that The Fleshtones sing, “You don’t know what it means/To hit the Bowery and make the scene/For a rock ’n’ roller and a kid from Queens.”