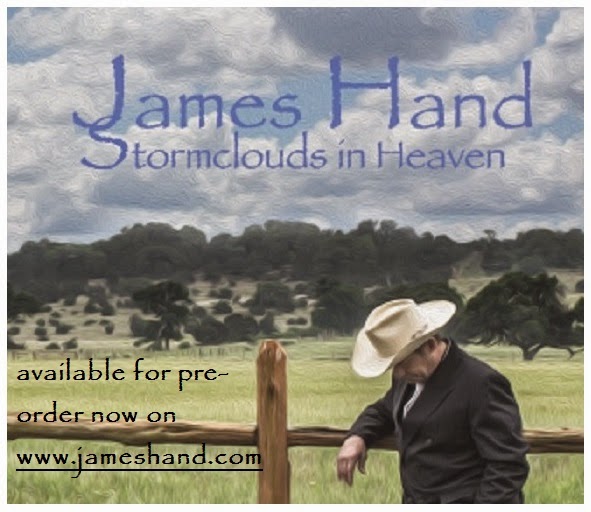 I've been lucky enough to hear an advance version of Stormclouds in Heaven, so I can tell you, it's a pure country gem.

Like any good country gospel albums, there are plenty of upbeat foot-stompin' "Praise Jesus!" songs on this album including "Lord Above," "My Savior as My Guide," "Why Oh Why," and the wry, "Devil Ain't No Quitter," a spiritual descendant of Bob Wills' "The Devil Ain't Lazy."

But this is a James Hand album, so even though it's full of the light of God, and amazing grace, you know you're going to have those clouds of fear and doubt alluded to in the title. As he sings in the title song, "Why do I stand at twilight and watch the setting sun / so afraid to face the light I want to turn and run ..."

And in "Tomorrow When," the singer wonders, "Where on Earth can Heaven be? / Where's that shing stair? /Just as near or far from me as it was on my last prayer."

Indeed, few singers around today capture the struggle between faith and hopelessness, fear and salvation as well as James Hand. In the post-Johnny Cash era, it's hard to find country gospel  this powerful.

And here's some incentive for ordering in advance: The special-bonus-James-Hand-fanatics edition of the CD will have two bonus songs,  "Darlin' of her Her Daddy's Eye" and "Lullaby Trail." These will be available only for the first 250 people who order online at jameshand.com . (It'll be shipped prior to the official release date for those who order by Aug 31st.)

Here's the first video from Stormclouds in Heaven. "I Wear the Scars," subtitled "Bobby's Song"  was written for a Viet Nam vet friend of Hand's who died last year.