The Rock 'n' Roll Tourist 2014: Afghan Whigs Are the Fire 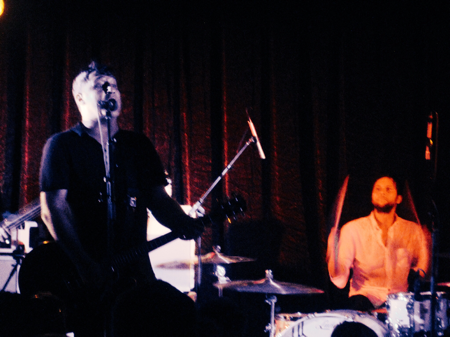 PORTLAND, OREGON _ The Afghan Whigs left us on an artistic high note back at the end of the last century. Their album 1965 was full of the crazy, burning, obsessive passion that characterized their greatest work throughout the '90s.

The group didn't sound much like Roy Orbison  -- they were more like an insane cross of Dinosaur Jr. and Isaac Hayes' band at Wattstax -- but singer Gregg Dulli's songs share some emotional traits with those of Orbison. Like the older singer, you can imagine Dulli becoming spiritually obsessed with a pretty woman walking down the street, and having his spirit cruelly demolished when the stranger keeps walking even after his best "Rrrrrrrrwwwwwllllll!" Of course, Dulli would take it further. It's easy to imagine him following the poor girl home and howling at her window until the dawn.

So The Afghan Whigs broke up. Dull carried on without the rest of the band. But despite some occasional intriguing flashes from The Twilight Singers or The Gutter Twins of his solo work, nothing reached the dizzying heights of the Whigs. 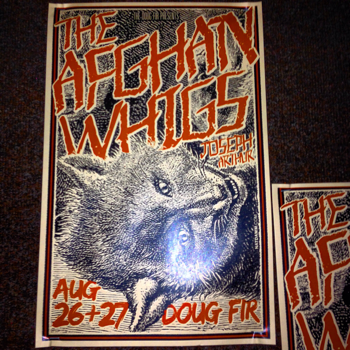 I was skeptical earlier this year when I found out that a new version of The Afghan Whigs had risen from the rock 'n' roll tarpits. I was so apprehensive of possible -- I thought probable -- disappointment, that I put off checking out their new album, Do the Beast for nearly four months. (Only two original members, Dulli and bassist John Curley are part of the album.)
But all my fears were for naught. The album is one of the best of the year so far. And their show at The Doug Fir, a cellar full of noise, as Petula Clark would say, in east Portland, showed them full of the power and rage that made us love them in the first place.

And yes, the new songs stand proudly with the old. They opened with a couple of the most intense songs from Do the Beast, "Parked Outside," which began with a weird violin solo by multi-instrumentalist Rick Nelson (yes, that's his name) before launching into its frightening robo-blues beat. This seamlessly was followed by another Beast song, " Matamoros," which is more ferocious live than on the record. Another standout Wednesday from the the new album was "The Lottery," which starts out with drums straight out of the Shaft soundtrack. 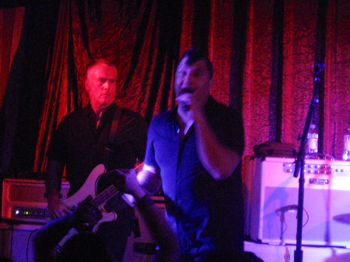 They didn't forget their '90s work. The Whigs cranked out amazing renditions of "John the Baptist,"  (my. Favorite song on 1965), an explosive "My Enemy" from Black Love, and the title song of Gentlemen.

They also did a handful of covers, including a slow, twisted Whigs-eye take on The Police's "Every Little Thing She Does is Magic" (Dulli hops off the stage and walks among the crowd during this) and, in the encore, the first verse of the overture from Jesus Christ Superstar.  (Longtime fans will recall that The Whigs covered "The Temple" from JCSS way back on their album Congregation. On Wednesday this served as the introduction to "Something Hot," another 1965 tune.

The best number of the evening though was the wild medley of a couple of Do the Beast  songs, Royal Cream,"  which starts out, "I know you've been sleepin' with another demon..." and the spooky "I am Fire," on which Dulli emphasizes his lyrics by pounding on a floor tom. And somehow this mutates into a dark take on Fleetwood Mac's "Tusk."

"Don't say that you love me! Just tell me that you need me!"

Damn! After 16 years or however long it's been I almost forgot how much I needed The Afghan Whigs.

This post has been edited for an embarrassing number of typos.
at August 28, 2014