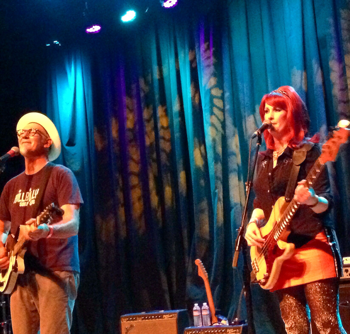 PORTLAND, OREGON _ I think Rick Miller was wearing the same  "Hillbilly Surf Club" T-shirt when I saw Southern Culture on the Skids 14 years ago at Santa Fe's Paramount club. Oh well. He wears it well.

Or maybe I was just having a flashback, one induced not by illegal and dangerous drugs, but by the fact that I think Southern Culture on the Skids were playing most of the same songs they played in Santa Fe all those years ago.

"Banana Puddin'," "Too Much Pork For Just One Fork,"  "House of Bamboo," "Liquored Up, Lacquered Down," "Nitty Gritty" ... All the hits, (speaking relatively, of course. Very few of the music acts around today that I like have actually had anything approaching a "hit.")

Not that I'm complaining, mind you. I would have been bitterly disappointed if Mary Huff hadn't done "Daddy Was a Preacher, Mama was a Go-Go Girl" (my favorite SCOTS song of all time) or if Miller hadn't called out "Little Debbie, Little Debbie!" during "Camel Walk."

And yes, I thoroughly enjoyed the fried chicken-tossing during the song "Eight Piece Box," which is a frequent ritual during a SCOTS show. Several enthusiastic audience members joined the band on stage for the fun during this. My biggest accomplishment of the evening was hitting Miller in the face with a piece of wing that had landed near my feet.

The band did perform a couple of tunes from their 2010 Kudzu Ranch album ("Bone Dry Dirt" and "Pig Pickin' "). But I wouldn't have minded if they'd done some of their more recent material like "Zombified" (maybe they save that one for Halloween) or their heartfelt cover of The Kinks' "Muswell Hillbilly" or some obscure older tunes like "The Man Who Wrestles the Bear" or "Carve That Possum." 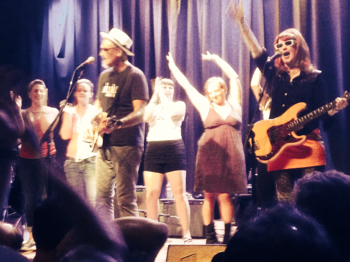 Their name might invoke an image of a culture in decline -- and maybe it was suppose to back in the '80s when they started. But SCOTS' upbeat, swampy mix of hillbilly, surf, rockabilly, exotica and soul actually is an expression of a culture I'm proud to be part of.