Everyone knows the names of Fats Domino, Little Richard -- and veryone ought to know the names of Irma Thomas, Professor Longhair, Ernie K-Doe, Bobby Charles and Clarence "Frogman" Henry. Unfortunately, far fewer people know the name of Cosimo Matassa, the New Orleans recording studio genius responsible for a big chunk of what came to be known as rock 'n' roll.

Cosimo died yesterday at the age of 88.

He opened his famed J&M Recording in the back of his family's appliance store on Ramparts Street. As the New Orleans Times Picayune's Keith Spera wrote yesterday:

It hardly seemed like the setting for a musical revolution. Upstairs, bookies ran a horse-betting operation. In the alley outside, a shoeshine man plied his trade. But Mr. Matassa engineered sessions featuring some of the biggest stars of the day, maximizing the sonic potential of relatively primitive recording gear.

Soon the hits started coming. In 1947 Roy Brown recorded "Good Rockin' Tonight," at J&M. In 1949 he began a partnership with piano player/producer Dave Bartholomew, who would become a major architect of the New Orleans sound. And later in '49, a chubby little guy named Antoine "Fats" Domino recorded eight songs (in one day!!!) there, including "The Fat Man," which would launch his career. 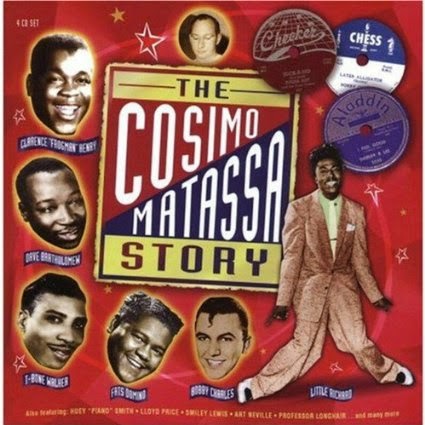 By the mid '50s Cosimo moved his operation to a larger space on Governor Nicholls Street in the French Quarter, which he named Cosimo Recording Studio. He ran that until the 1980s, when he got out of the music biz and went to work for his family grocery.

In case you have any spare cash in your music budget, today would be a good day to pick up one or both four-disc Cosimo box sets, The Cosimo Marassa Story (which my daughter gave me several years ago) and Gumbo Ya Ya: The Cosimo Matassa Story Vol. 2 (which I bought when I was in New Orleans last year.

Thanks for all you did, Cosimo.

Here's three of the songs Cosimo taught us, starting with Mr. Domino:

And the one that started it all ...