A version of this was published in The Santa Fe New Mexican
Jan. 2, 2015 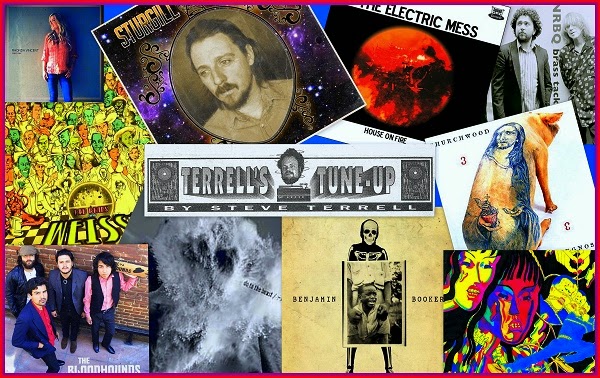 One of the most frequent questions I get from readers of this column, as well as from listeners to my podcast and radio shows, is “Where do you find this stuff?” I usually reply, half-joking, “I don’t find it. It finds me.”

But the question underscores what has become the state of music in the early 21st century. It’s harder to find great music with the tightly controlled playlists on commercial radio, the consolidation of major labels, and all that other stuff we’ve been wringing our hands about for so many years. But with the magic of the internet, there are a zillion more choices if music means enough to you that you are willing to invest a little time to seek it out.

Faced with that reality, 2014 didn't produce any new Elvis, Beatles, or Nirvana. But it did bring breakout work by Sturgill Simpson, Benjamin Booker, and The Bloodhounds — plus a lot of cool sounds by old favorites and new favorites who deserve bigger audiences. Here are my favorites of the year.

1. Red Beans and Weiss by Chuck E. Weiss. The craggy-faced, mop-topped hierophant of the hipster underground (and Tom Waits crony) returned in 2014 with a new album that’s full of stripped-down rock ’ n’ roll, R & B, blues, laughs, post-Beat cool, hard-earned wisdom, and flashes of insanity. For sheer goofiness, listen to the crazy New Orleans-soaked singalong, “Willy’s in the Pee Pee House,” or “Hey Pendejo,” the greatest pseudo-Mexican tune by gringos since the Pogues’ “Fiesta.” And for some dead-on insight into the Holocaust, try “Bomb the Tracks.”

2. Metamodern Sounds in Country Music by Sturgill Simpson. This is truly one of the strangest country albums I’ve ever heard. It’s also one of the most authentic-sounding new country albums to cross my eardrums in a long while — even though there are a couple of spots where the music drifts from its sturdy, ’70s-outlaw foundations into raw psychedelia. And yes, this is “authentic country,” even with lyrics like “reptile aliens made of light cut you open and pull out all your pain” and references to marijuana, LSD, psilocybin, and DMT. And that’s just in the first song. Sturgill Simpson is a true hillbilly visionary.

3. Benjamin Booker (self-titled). I’ve been a huge fan of Benjamin Booker’s ever since his early days. In fact, I became a devoted, drooling Bookerhead right after the release of this, his debut album, in late August. A discerning ear probably can hear subtle musical nods to the young New Orleans-based rocker’s idols from the realms of primitive rock, raw blues, and gritty soul in Booker’s music. (His record-company hype mentioned the Gun Club, Blind Willie Johnson, and T. Rex.) But there is no obvious imitation at work here. Booker builds on the foundations of the music he loves and creates a sound that’s fresh, though somewhat familiar.

4. Do the Beast by The Afghan Whigs. As with most rock reunions, I was skeptical when I found out that a new version of the Afghan Whigs (a Cincinnati band led by singer/howler Greg Dulli that called it quits around the turn of the century) had risen from the rock ’n’ roll tarpits. I was so apprehensive of disappointment that I put off checking out their new album for nearly four months. But all my fears were for naught. Do the Beast is full of the power and rage that made us love this band back in the ’90s.

5. Brass Tacks by NRBQ. As with The Afghan Whigs, I was leery about the new version of NRBQ, in which singer/keyboardist Terry Adams is the only original member. In fact, I skipped the first couple of albums by the group’s latest lineup. But after just a few seconds into Brass Tacks, I realized I was wrong. Adams is still in great form, but new Qs Scott Ligon and Casey McDonough both sing and write some fine tunes. The band has long had a talent for creating songs that at first glance seem easy and lighthearted, but on closer examination turn out to be at least somewhat twisted.

6. 3: Trickgnosis by Churchwood. With cryptic but alluring lyrics with references to Gnosticism, voodoo, God, and Satan, Churchwood created a unified work in which some kind of cosmic struggle seems to be playing out from song to song (though there’s no easy story line to grasp on this album). Each tune is a weird tale sung over musical backdrops with changing time signatures and unpredictable twists and turns, with nods to Captain Beefheart, Frank Zappa, and Pere Ubu.

7. Let Loose! by The Bloodhounds. This mostly Chicano band from East L.A. plays basic, unfettered, rocking blues — closer to gutbucket than to the smooth, tame uptown stuff — a little rockabilly sneer. They honor ascended masters like Hound Dog Taylor and Howlin’ Wolf, as well as the Yardbirds, the Count Five and other ’60s-garage crazies. And sometimes, when you least expect it, the Bloodhounds will slip into jug-band or skiffle mode. Despite all its obvious roots in the past, Let Loose! is some of the most exciting music I’ve heard lately.

8. Only Me by Rhonda Vincent. Rhonda Vincent has to be one of the most undeservedly underrecognized musicians in Nashville today. Starting out in the world of bluegrass, she has a pure, beautiful voice, and she’s not afraid to wail. She also knows her way around a mandolin. This album is divided into two six-song discs (needlessly, because everything would easily have fit on one). The first is a bluegrass set — acoustic, with only traditional instruments — and the second is country. Both are impressive.

9. House on Fire by The Electric Mess. Hands down, this is the garage-rock album of the year. If you like wild, frantic, high-energy, guitar-based (with an electric organ) rock ’n’ roll, you really need to acquaint yourself with this New York band. House on Fire is as good a place as any to start. All 13 tracks are full of fire and craziness. But that’s a good thing. Fronted by singer Chip Fontaine (real name: Esther Crow), the group has a sound rooted in ’60s garage rock but not shackled in nostalgia.

10. Drop by Thee Oh Sees. After only a few months of their “indefinite hiatus,” Thee Oh Sees apparently reformed and sprang back to life. Guitarist/vocalist John Dwyer moved from the group’s home base of San Francisco to Los Angeles, got himself a new bunch of bandmates, and made a dandy album. Although not as overtly powerful as last year’s magical Floating Coffin, it still has several mighty examples of Dwyer’s fuzzed-out, rubbery psychedelic excursions. “Penetrating Eye,” “Encrypted Bounce,” and “Savage Victory” are all powerful tunes.

I'll be playing tracks from all of these this weekend on The Santa Fe Opry (10 pm Friday) and Terrell's Sound World (10 pm Sunday) on KSFR
at January 01, 2015