A couple of months ago, when I first got my copy of It’s All in Your Head, the latest offering by that “culture jamming” audio prankster collective known as Negativland, I realized that this work, packaged in a copy of the Bible, could offend a lot of people. (A collector’s edition of the album comes in a Koran.)

But I didn’t suspect that it could literally be dangerous. However, the murders in Paris of Charlie Hebdo staff members by Islamic extremists outraged by irreverent cartoons reminded me that we live in a world in which satire can get you killed. This makes It’s All in Your Head far more relevant than it was the day I opened it. The project is a rambling exploration of faith, God, organized religions, and how prevailing attitudes toward matters of the spirit affect us all. The first disc bites into Christianity, while the second mostly takes on Islam.

Using clips borrowed from television; radio; movies; children’s records; sermons; scientific lectures; comedy routines; the group’s trademark electronic blips, bloops, and squalls; and even a few songs you might recognize (among them the Talking Heads’ “Heaven,” Jefferson Starship’s “Miracles,” and “I’ve Gotta Be Me” by Sammy Davis Jr.), Negativland constructs an aural theme-park ride that’s funny, horrifying, educational, emotional, and mystifying — sometimes all at once.

“There is no God!” a man insanely shouts at various points throughout this two-disc extended sound collage. I’m not sure whether this sound clip is from a movie (it reminds me a little of Charlton Heston bellowing “It’s a madhouse!” in the original Planet of the Apes) or if it’s one of the Negativlads yelling. It doesn’t matter. The message is clear. However, a counterpart to that is another sound clip, frequently repeated throughout It’s All in Your Head, in which a different man solemnly says, “Let us have faith.” The voice sounds familiar. I think it might be Richard Nixon.

Anyone who has followed Negativland knows where the group stands. In 1987 the band became notorious for a hilarious track called “Christianity Is Stupid,” in which the words of the title are repeated in an out-of-context sound clip by some blustery preacher.

This album delves deeper. It could be subtitled "All Religions Are Stupid." It’s built around a radio station, It’s All in Your Head FM (“Monotheism, but in stereo”), on the Universal Media Netweb.

For most of the first disc, you hear different voices, sometimes interrupted by the imaginary radio staff, presenting religious arguments. On one side are Christian preachers, country singers, and others arguing against atheism, evolution, same-sex marriage, and so on. On the other side there are anthropologists, scientists, and other critics of religion, basically arguing that Christianity is, well, stupid.

The track titled “Alone With Just a Story” features the voice of a man with a British accent (is this the late Christopher Hitchens?) questioning the entire idea of faith.

“It teaches people, especially teaches children, that to believe in something without evidence is a virtue, ,,, I think children should be taught to seek evidence. … You’re taught if you start to have doubts, then you must pray to overcome those doubts. You’re taught that if somebody comes to you with plausible arguments to the contrary, then that’s probably the devil speaking.”

After this, a woman says, “This is really fun because you can make a Jello mold that looks like a brain.”

But in addition to mocking anti-evolution preachers, Negativland also lampoons pro-evolution scientists in what is probably the funniest part of the album: a Firesign Theatre-like track called “Wildlife Tonight.” This is an original piece — not something sampled from radio or TV — in which goofy scientists shave a chimp to prove that apes are related to humans. (“Don’t worry about Cherry, folks, we have a little skirt and sweater for her.”)

The first disc tends to be lighthearted. Poking fun at preachers is a time-honored American comedy tradition, going back before Mark Twain. Even the serious parts seem like overly earnest dorm-room discussions. Negativland is on safe ground here.

But at the very end of the disc, there is a blaring tone followed by an announcement of an attack on the United States and a blast of sonic discordance.

At the outset of the next disc, the host announces that the station is under new management. Middle Eastern music and people speaking in Arabic follow. The announcer, in his generic radio voice, says, “You’re listening to It’s All in Your Head FM. We’re all Mohammads now.”

And now there are ghostly voices saying “God is perfect” and repeating the word Islam. This is followed by a series of clips of scholarly lectures on the history of Islam, terrorism, and the Crusades. In a track called “Holy War,” we hear the voice of George W. Bush announcing the bombing of Baghdad and the invasion of Iraq and hear some American berserker calling for the bombing of Mecca and other holy places. “This is a holy war,” he says. 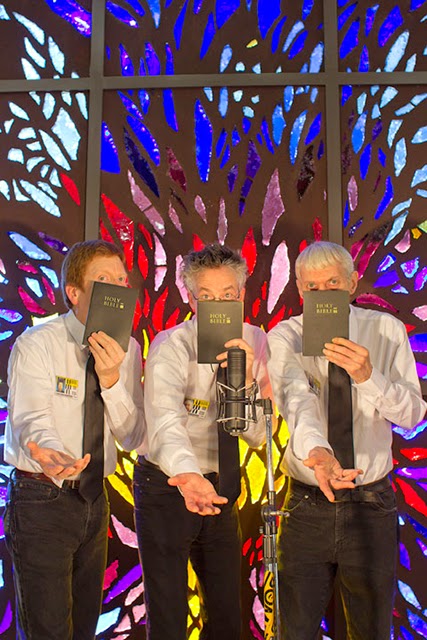 The most chilling moment of the entire album comes in the middle of a lengthy track called “Push the Button.” Here a woman, purportedly a jihadist (her accent sounds British), explains, “I don’t target women and children in particular. … The way I see it is that the Jews weren’t merciful with my nation. I don’t have anything against Israeli children. But I know there is the possibility that an Israeli child could grow up and one day come to kill my son or my neighbor’s son. Therefore I feel he should be dead now.”

And while she is justifying these unspeakable acts, in the background you hear a group of schoolchildren singing a sweet version of the Beach Boys’ “God Only Knows” (from the Langley Schools Music Project, 1970s recordings of popular songs performed by kids).

The major theme of It’s All in Your Head is that blind faith in the god of whatever culture you come from, in conjunction with unblinking obedience to political leaders (a by-product of that unquestioning faith), can only lead to hatred and violence against those who believe otherwise. Not a terribly original thought, though a valid one.

The album ends with a message from the radio station, which seems to have returned to its old management. The announcer puts forth the question:

“God, natural fact or unnatural fiction? This decision is your head’s to decide. And the next step will be yours to remove your blindfold and take this All in Your Head message out of this building to all of those unable to attend this broadcast.”

With “Awesome God,” Rich Mullins’ slick 1988 contemporary gospel song swelling in the background, a listener might envision a righteous, godless army of determined rationalists marching forth with the terrible swift sword of intellect to vanquish the blind and hateful forces of religious fanaticism.

What could possibly go wrong?