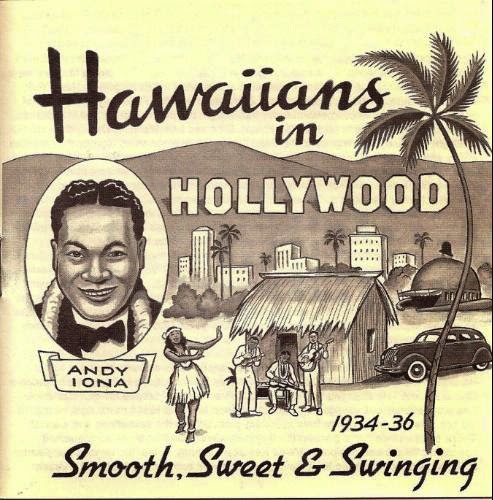 Damn, I hate winter! The snow here in Santa Fe made me start fantasizing about Hawaii ...

So let's have some music from Andy Iona & His Islanders to warm us up.

Ioana was born New Year's Day, 1902. He's best known for combining traditional Hawaiian music with swing jazz. According to his bio at the University of Hawaii's Hawaiian Music Collection site:

He was considered an all around musician with the ability to play many instruments; but was noted for being an excellent steel guitarist and saxophonist. Beyond his musical talent, Andy was a superb arranger and composer, having the ability to write a quality orchestral arrangement without using an instrument. Despite the loss of his thumb in a machine shop accident at school, Andy became the first saxophone player for John Noble and the Moana Orchestra in the early 1920s. He also was a member of the Royal Hawaiian Band.

Though he started out in the biz playng sax, Ioan became better know for playing Hawaiian steel guitar.

Ioana  died in 1966, but his music lives on through the records he left behind -- and through Youtube and the Internet Archives.

Here is one of his better-known songs:


Here's one of the tunes he recorded with Louis Armstrong

And in case you can't get enough, here is a playlist of 14 Ioana tunes from the Internet Archive. Most of these were recorded in the 1930s.