THROWBACK THURSDAY: The Wild and Bloody Journey of Sam Hall 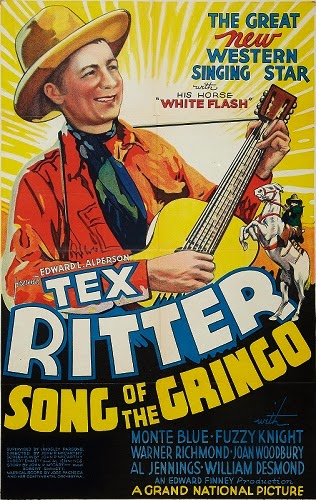 I first heard of the outlaw Sam Hall as a little kid. I heard it on a Tex Ritter album called Blood on the Saddle, which originally was released in 1960. Next to the title song -- which is a story for another day -- "Sam Hall" was my favorite track on the album.

There was nothing heroic about Sam Hall, at least the way Tex told it. No mythic elements. No scent of injustice in his execution. He was just a hardcore, unrepentant bad-ass, a self-admitted murderer ("I killed a man they said, and I smashed in his head and I left him there for dead ...") facing the gallows with sneer and weird little whoop. He confronts the sheriff, a preacher, a woman named Molly, or may or may not have done him wrong and a hostile crowd that wants to see him die.

And Sam's main message to them all: "Damn your eyes!" Or was it "Blast Your Hide"? Or some other variation?

I didn't realize it at the time, but Tex Ritter had done a few versions of Sam Hall, It was the first single he recorded for Decca Records in the mid 1930s. And he sang in his first movie, Song of the Gringo in 1936. Here's a video of that:


But "Sam Hall" is much older than that.

Richard Thompson on his 2003 album 10,000 Years of Popular Music, introduces it, saying introduces it calling it "an 1840s" song. Says Thompson, "And the guy who sang it would come on stage in the prison stripes and manacles.... So feel free to boo during the song, boo and hiss ..."

About 1845-50 a comic singer named G. W. Ross revived [`Jack Hall'] under the name `Sam Hall,' with an added coarseness not in the original."

Ross apparently turned it into the kind of stage routine Thompson described.

Here's Thompson's version which is based on Ross' song.

Skipping ahead to the 1960s, The Dubliners, an Irish folk group recorded a version of "Sam Hall." I their re-telling, the condemned chimney sweep isn't just a blustery bad guy. He has taken on some aspects of Robin Hood.

I have twenty pounds in store and I’ll rob for twenty more
For the rich must help the poor, so must I ...

Note that the Sam Hall in the British or Irish versions is just a robber, not a murderer. But here in America, our Sam is a killer. Singer Josh White's lyrics are closer in to Ritter's: "You're a bunch of muckers all, goddamn your eyes ..." Here's his version, which first appeared in 1955 on White's  album The Story Of John Henry & Ballads, Blues And Other Songs.

Meanwhile, Johnny Cash's Sam, from his 1965 album Sings the Ballads of the True West sounds like a psychotic drunk.

In their 1996 album Green Suede Shoes, the Celt-rock band Black 47 took Sam back to the Emerald Isle. In their version, loosely based on that of The Dubliners, Sam is a chimney sweep again, an oppressed worker who lost his temper at a cruel boss.