WACKY WEDNESDAY: The Doctor, The Eggplant and Me 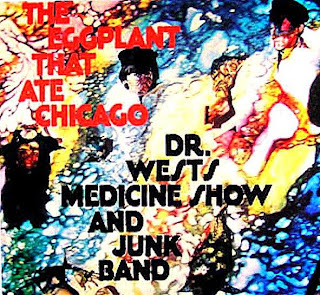 Most people familiar with Norman Greenbaum know him as the "Spirit in the Sky" guy.

But years before Greenbaum was doing the psychedelic Jesus boogie, he was selling some musical snake oil under the name of Dr. West.

Dr. West's Medicine Show and Junk Band never got to be as famous as Jim Kweskin's Jug Band, which came before them, or Dan Hicks & His Hot Licks, who came after them.

But Greenbaum's band had a true novelty hit, circa 1966 with a goofy jug-band style tune called "The Eggplant That Ate Chicago."

For the uninitiated, here's how that song went:

According to an old rock 'n' roll cliche, The Velvet Underground didn't sell many records, but every one who bought one of their records started a band.

That was my story, except instead of The Velvet Underground, it was Dr. West's Medicine Show and Junk Band. (Except I didn't actually buy their album I won my copy from WKY Radio in Oklahoma City. They had a contest for people to draw the Eggplant that Ate Chicago. I did and I was one of the winners. I was in the 8th grade.)

And just like the Eggplant thought about Chicago, it "was a treat, it was sweet, it was just like sugar.”

As I wrote when reviewing a Dr. West retrospect in No Depression magazine back in 1999:

The official punk rock party line is that punk is the most democratic of all types of music because you don’t even know how to play your instrument to be in a band. But for me, as a youngster in the late 1960s, it was jug-band music that opened the door. With a jug band, you didn’t even need to have a real instrument to join in. Antiquated household appliances like the washtub and washboard could be turned into a rhythm section, kindergarten percussion instruments were welcome, and kazoos were mandatory.

The band with my brother Jack was called The Ramhorn City Go-Go Squad & Uptight Washtub Band. We covered "Eggplant," (though to be honest, we never got the hang of the song), as well as other Dr. West tunes, including these two:


But apparently we weren't the only ones who dug "Eggplant." Here's a soul version by the great Big Maybelle.