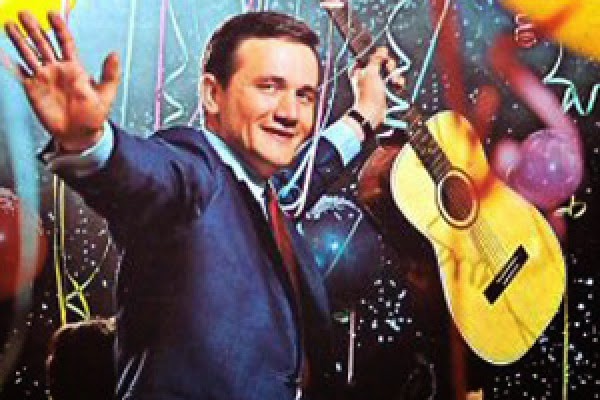 Roger Miller, one of my boyhood idols, who I got to meet as an adult, would have turned 79 on Jan. 2.

Like me, Miller grew up in Oklahoma (though he was born in Texas.) Erick, Okla. is where Roger spent much of his boyhood. And by the time he rose to fame in the mid 1960s, He was one third of my Holy Okie Trinity -- along with Mickey Mantle and Leroy Gordon Cooper, the first Okie in outer space.

I'm going to cheat a little bit and re-post something I wrote in this blog about 11 years ago.

I met Roger shortly after he moved to Santa Fe backstage at a Michael Martin Murphey concert at Paolo Soleri in the summer of 1980. Roger was the "surprise" guest. It would have been the first time I'd seen him play since I saw him at Springlake amusement park in Oklahoma City, circa 1965. I was in sixth grade then. ...

But it wasn't meant to be that night at Paolo Soleri in 1980. Roger came out on stage, said, "Hi, I live down the road aways," struck a chord -- and the rain came down. That's back when Santa Fe used to have a "monsoon" season. It rained so hard that the rest of the show was cancelled.

The next time he tried to perform around here was at the Downs of Santa Fe at a Barbara Mandrell show a couple of years later. It rained like hell that night too, but at least the stage was covered, so the show went on.

I interviewed him for The Santa Fe Reporter shortly after the Paolo fiasco. ...

For a couple of years in the early '80s, I ran into him and his wife Mary frequently. Once he introduced me to Dandy Don Meredith at the Shohko Cafe. But one of the biggest nights for my ego was when Roger Miller introduced me to Hank Thompson in the dressing room of The Line Camp in Pojoaque. "Steve grew up on Reno Street," Roger said, referring to an old Oklahoma City skid row.

All three of us laughed at that Okie in-joke.

And now you can laugh at Roger's amazing songs and his crazy wit.

This first one shows the magic of live television. (Notice Roger's reaction when the band blows a chord.)


Roger sings a couple of classics on Austin City Limits in the 1980s, introducing himself -- correctly -- as "probably one of the greatest songwriters to ever live." (I had to replace the original video I had here, which vanished from YouTube.)

And here's Roger and Dino. "No dirty numbers," he cautions Martin.