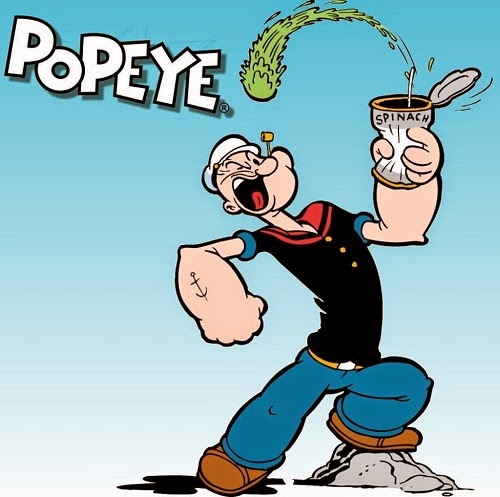 On this Wacky Wednesday, I'm going to pay musical tribute to one of my childhood heroes, Popeye the Sailor Man.

I first became acquainted with Popeye through TV in the late 1950s or early '60s. If my memory serves me well, one of the stations in Oklahoma City had an afternoon slot where they ran Popeye cartoons weekday afternoons.

I didn't know -- or care -- at the time, but Popeye had been around a lot longer than TV. He was around even before he was an animated cartton. He first appeared as a character in a comic strip called Thimble Theater by  Elzie Crisler Segar. That was Jan. 17, 1929 -- 86 years ago last Saturday.

The spinach-chomping sailor became so popular that in 1931, Billy Murray, a well-known singer of his era, recorded a novelty tune with Al Dollar & His Ten Cent Band.

This was two years before Popeye became the subject of animated cartoons. Along with  Olive Oyl and Bluto, he first appeared in a 1934 Betty Boop cartoon by Max  Fleischer, for my money the greatest of all the animated cartoonists.

Fleischer Studios cranked out 90 cartoons between 1934 and 1942. (They showed a few of these ever so often when I was watching Popeye on the tube as a kid. But most of the ones I saw were the vastly inferior ones made by Famous Studios and King Features Syndicate

Music always seemed to play a big part in the cartoons. Here's Popeye's version of one of my favorite songs, "The Man on the Flying Trapeze."

And here is Popeye's theme song from the live-action Popeye movie from 1980, directed by Robert Altman and starring Robin Williams. (Despite the fact that I love Altman, Williams and Popeye, the movie was pretty crappy. But this little scene is cool.)