WACKY WEDNESDAY: Take the Skinheads Through the Tulips

In what had to have been Camper Van Beethoven's strangest concert of their early career, on October 26, 1986, the band found themselves backing the one and only Tiny Tim at a bar in Columbus, Ohio.

Yes, that Tiny Tim. The man who brought us "Tiptoe Through the Tulips," the scraggly-haired falsetto-voiced freak who was all over the ukulele some 40 years before bands like Beirut made the uke hip.

Yes, there was Camper, backing Tiny on timeless classics like "Let Me Call You Sweetheart," "If You Knew Susie," and "Won't You Come Home Bill Bailey."

And don't forget God and country. Tiny and Camper roared through "He's Got the Whole World in His Hands" and "You're a Grand Old Flag."

Most all of the tunes are under two minutes long and many are less than 60 seconds. Too bad D. Boone already had died by this point. Tiny could have hired The Minutemen.

In an interview in 2013 with The Atlanta Music Guide, Camper's Jonathan Segel said the show was the funniest moment in the group's career.

We pulled up at Stache’s in Columbus, OH, and saw the bill was Camper Van Beethoven and Tiny Tim, and the promoter met us outside and said he had promised him we’d be his back up band. He was like a grandma, and he did not rehearse us at all, just said: you’ll know the songs, I’ll just tell you how fast to go and what key. And sure enough, before the song, he would wave a hand and say “in D, Maestro!”… that was it. 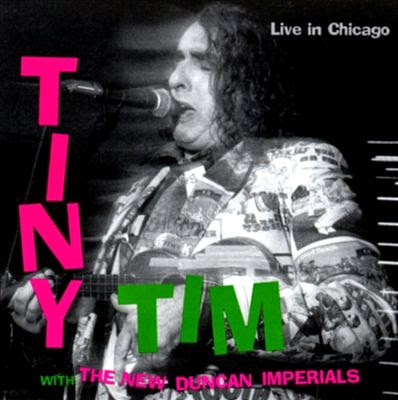 CVB's singer David Lowrey talked about the Columbus gig  just a few weeks after the show in a radio interview preserved at the Live Music Archive.

"It was an experiment in new colognes, I think. ... state-sponsored cologne terrorism. ... What he did is he just came out and he told us, `Well, I'll tell you what keys the songs are in and I'll kind of indicate the tempo and you guys just figure it out. And we did."

(Lowrey says this about three minutes into the interview)

Camper Van Beethoven isn't the only rock band to back Tiny Tim. In the '90s he did a live album with The New Duncan Imperials as well as a studio album with Brave Combo.

Unfortunately, there was no professional recording done at the Camper Van Beethoven show in Columbus.

But somebody was recording it, and it's on the Live Music Achive. Audiophiles can exit right now, but everyone else enjoy it on the player below. Tiny comes on right after Camper's regular set:

And just for the heck of it, here's Tiny's amazing take on "Stairway to Heaven" with Brave Combo.