THROWBACK THURSDAY: February Made Me Shiver 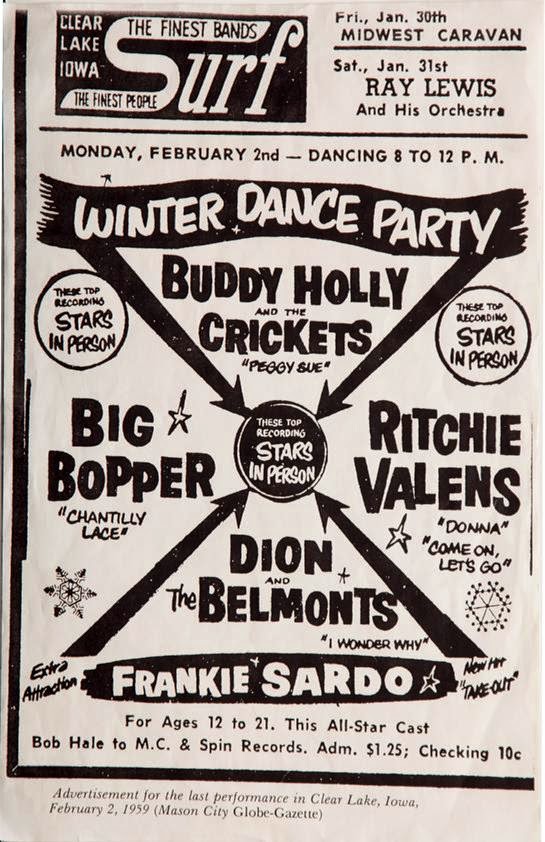 I know I usually throwback to the pre-rock 'n' roll era on Throwback Thursday, but the plane crash that killed Buddy Holly, Ritchie Valens and The Big Bopper -- 56 years and two days ago -- is a big one.

I was only five years old when the single engine plane carrying the three rockers went down in a snow storm over Iowa on Feb. 3, 1959. But I was a little rock 'n' roll freak even then. I loved The Coasters and I loved Buddy Holly, especially his hit "Peggy Sue." I recall hearing it played on American Bandstand. My mom told me that one of the teenage girls dancing on the show was actually Peggy Sue.

I was only five, but I was in lust!

If my memory serves, I found out about the plane crash listening to a disc jockey talk about it on the radio before playing a Buddy song. I only remember feeling incredibly sad. I'd never thought much about death before. How could someone as cool as Buddy Holly die?

I still get sad thinking about it. At least the music lives on.

Here's Ritchie Valens, with a weird little cameo by Chuck Berry and Alan Freed (from the movie Go, Johnny, Go! )

And here's the Bopper, J.P. Richardson, the only one of the three who hasn't had a movie made about him.

And what the hell, this is far more recent history, but Feb. 4, 2009 is the day that Erick Lee Purkhiser, aka Lux Interior of The Cramps, died. February is just a crappy month for rock 'n' roll.