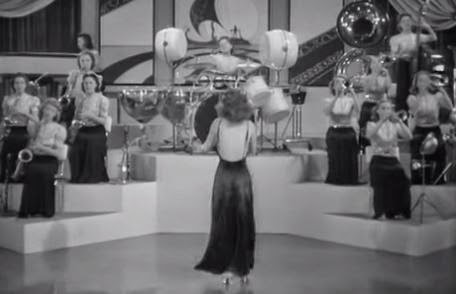 Here's a great bunch of dames, Frances Carroll  & The Coquettes.

I stumbled across a shorter version of this 1940 Warner Brothers music short -- just the segment featuring "our charming little drummer" Viola Smith -- a couple of weeks ago when some fellow rock 'n' roll freak posted it on Facebook.

The film was directed by Roy Mack, who was responsible for a lot of music shorts in that era. Sadly, only Carroll and Smith and tapdancer Eunice Healey are identified in the Internet Movie Database. But another Coquette was Smith's sister Mildred Bartash, who played clarinet and sax,

From 1938 to 1941 Viola flourished in a highly acclaimed all female band that she and her sister Mildred organized, called The Coquettes. The Coquettes were so successful, and she as their drummer so popular, that Viola and her drum set graced the cover of Billboard Magazine on 24 February 1940.

So just sit back and enjoy some hot swing from this remarkable band.


And here's an interview with Viola Smith from a couple of years ago. She's still alive and 102 years old.