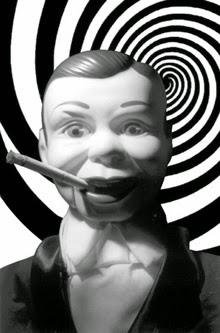 Those familiar with the music of Stan Ridgway know that despite this singer's natural talent, the real secret of his success is a talent scout and big wheel by the name of Jackie "Teak" Lazar.

Not only is Jackie the brains behind Ridgway's career, at least since Ridgway's departure from Wall of Voodoo, he's also had roles in Ridgway videos and, yes even at least one guest vocal on a Ridgway  album.

Back in 2002, Jackie appeared on a hidden track on Ridgway's album Holiday in Dirt.  It was a sensitive rendering of Charlie Rich's greatest hit, "Behind Closed Doors." Some purists argued that the track should remain hidden, but I beg to differ.

In fact I bet you'll agree that no one knows what goes on behind closed doors with Jackie.

Spotify users can hear it below:

About three years after the release of Holiday in  Dirt, Ridgway released a wonder video collection of songs from that album. "Behind Closed Doors" was there, but I think another actor portrayed Jackie. (Sorry, I can't find any Youtubes of that video. (The DVD seems to be out of print, but you can buy it at Amazon at a decent price.)

But even before "Behind Closed Doors," Jackie appeared in The Drywall Incident, a music and video project involving Ridgway's band Drywall. (I can't find the video by Carlos Grasso anywhere online, but the music is wonderful and you can buy it HERE)

And Jackie starred in Ridgway's 1995 video of "Big Dumb Town."

Some say that Jackie is a distant cousin of Jimmy the Talking Dummy, who used to be part of the road crew for Dan Hicks and the Hot Licks.


Though Jackie "Teak" Lazar recordings are rare,  you can still find him singing some American classics on MP3s ((that I think originally were posted on Ridgway's website many years ago.) Three of them -- "Always on My Mind," "A Very Good Year" and "The Wayward Wind" are HERE.

Just don't believe the hideous lies and slander in the very last line in small print at the bottom of the page.
at February 18, 2015