As much as politicians love to bash Washington, D.C. -- even a lot of those cynical ones who spend millions of bucks to get there and stay there -- it can be an inspiring place to visit. I was there last week during a short vacation, And several of the Capitol's beautiful shrines -- the Martin Luther King Memorial, the Franklin Delano Roosevelt Memorial -- were truly uplifting. Even the modest World War One Memorial had its own quiet power. Walking by it reminded me of that heartbreaking line, as sung by The Pogues, in "The Band Played Waltzing Matilda" about "the forgotten heroes of a forgotten war." I couldn't get it out of my head.

And yes, I saw some inspiring music too, music that makes me proud to be an American.

That's the sound of The Blues Explosion!

They roared, they thundered, they rolled, they tumbled. Spencer and fellow guitarist Judah Bauer made their guitars scream while drummer Russell Simins was, well, explosive.

And Spencer sweats more than any singer I've ever seen with the possible exception of James Brown.

I'd seen this group live twice before. Once here in Santa Fe back in 1994 when they opened for The Breeders at the old Sweeney Convention Center. The next time was 1997 when I was playing Rock 'n' Roll Tourist in New York and JSBX was playing at the Freedom Tibet festival.

But 21 years after I saw them for the first time, I have to say The Jon Spencer Blues Explosion was louder, wilder, more distorted, more screechy than they were back in the day.

It sometimes seemed they were emphasizing the "No-Wave" aspect of the album title on Friday night. Yet still, it was a "Dance Party." The music always is more fun than artsy -- even when it's artsy, Through the wall of noise, distorted blues, soul and funk riffs provided a framework for the sonic madness. And though sometimes the vocals were buried beneath the chaos, Spencer's charisma, his sly grin and his unabashed enthusiastic showmanship carried the night.

And the boy plays a mean theremin!

I'd purchased my tickets for this show weeks ago. But I was surprised to learn just a couple of hours before the concert that Spencer's opening act was going to be none other than Daddy Long Legs, a dapper trio from Brooklyn (by way of St. Louis) of whom a wise critic once said "is the most exciting blues/punk group, this side of Rev. Peyton’s Big Damn Band, on the scene today."

Led by the tall gawky red-headed singer and harmonica honker (who also goes by the name Daddy Long Legs) the group ripped through tunes from their Norton Records albums Blood from a Stone and Evil Eye on You.

I've been wanting to see this band for a couple of years. To be able to see them on the same bill as The Jon Spencer Blues Explosion was a special joy. 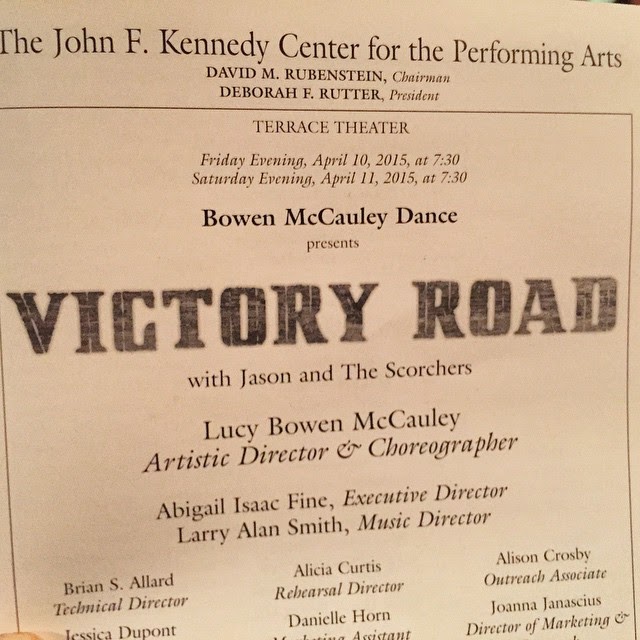 But by far the weirdest show I saw in Washington, D.C. was by one of my favorite cowpunk groups, Jason & The Scorchers, who provided the music for a modern dance performance at The Kennedy Center.

The idea for the performance, titled Victory Road  (from an old Scorchers tune) came from  Lucy Bowen McCauley, artistic director and choreographer of the dance company bearing her name.

“It’s a journey,” McCauley told The Washington City Paper. “There’s a reason there’s one song after the other. It’s not like Broadway; there’s no talking among the dancers and the dancers don’t sing. But there is a storyline, a riff on [The Scorchers] history.”

Last Friday night was the world premier of Victory Road.

Basically, singer Jason Ringenberg stood at one end of the stage while lead guitarist Warner Hodges was at the other end. The rest of the Scorchers were below in the orchestra pit. In the middle of the stage, the dancers did their thing.

Look, I'm a complete rube when it comes to dance performances, modern or otherwise. I'm a rock 'n' roll guy, not a dance guy. So I won't pretend to review that aspect of the show. I was there for Jason and the boys -- though I suspect most of the audience there were modern-dance fans.

And they sounded good, tromping through some of my favorite rocking Scorchers hits like "Gospel Plow," "White Lies," "Shop It Around" "Self Sabotage," and the Dylan-penned "Absolutely Sweet Marie." Several of the tunes in the show -- including "Getting Nowhere Fast," "Days of Wine and Roses" -- were from their most recent (2010) album, Halcyon Times.

However, probably due to the elite setting of the Kennedy Center and the whole dance thing, the Scorchers were more subdued than the wild men I saw tear up the Liberty Lunch in Austin at South by Southwest in 1997. They never turned it up to 11 at the Kennedy Center. Kept it about 8 and a half, even for their encore songs they played following the regular Victory Road program.

Still, it was great to see them again. I have to respect their willingness to try something like this.

Come to think of it, Jason & The Scorchers doing music for a modern dance troupe makes me proud to be an American also.