THROWBACK THURSDAY: Getting Ready for 4-20 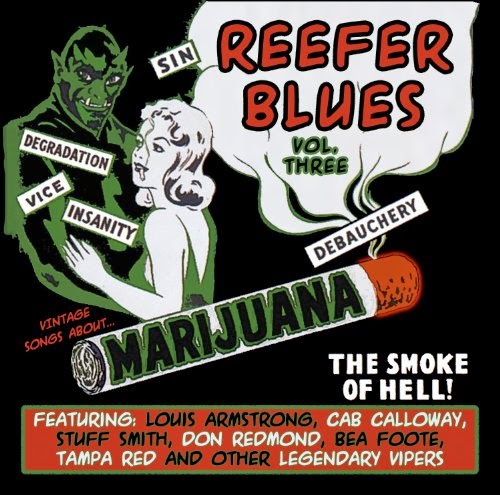 I'm not exactly sure how those magic numbers came to be associated with marijuana. And I don't really care. All I know is decades before that happened some of the most respected names in the world of jazz were celebrating the joys of the weed in song.

And that didn't escape the notice of the drug warriors of that era. The infamous Harry Anslinger, the commissioner of the Federal Bureau of Narcotics for more than 30 years, pursued the menace of reefer-smoking jazzbos with the same grim determination with which J. Edgar Hoover hounded John Lennon years later.

Larry "Ratso" Sloman, in his book Reefer Madness: A History of Marijuana (1979) quotes Anslinger's testimony before a Congressional committee in 1949.

"We have been running into a lot of traffic among these jazz musicians, and I am not speaking about the good musicians, but the jazz type, " he said. "In North Carolina we arrested a whole orchestra, everybody in the orchestra."

I'm sure Anslinger would have loved to have collared Cab Calloway, who sang several reefer tunes in his time, including this 1932 ode to a favorite purveyor known as "The Man from Harlem."

Meanwhile, Fats Waller was dreaming of reefer five feet long. He recorded the song commonly known as "If You's a Viper" in 1943 (That was seven years after the original recording by a jazz violinist named Stuff Smith.). Waller made this for Armed Forces radio, and, according to Sloman, he basically took the opportunity to thumb his nose at Anslinger, who only 16 days before had pledged to make mass arrests of "swing bands" who indulged in reefer smoking.

Don Redman wasn't as famous as Cab or The Ink Spots. But he was a member of McKinney's Cotton Pickers and played with the likes of  Fletcher Henderson, Pearl Bailey and Eubie Blake. And he was well acquainted with that reefer man.

To be honest, I'm not really familiar with Jazz Gillum. But I do like his song "Reefer Head Woman."


But wait a minute ... WHAT KIND OF MESSAGE ARE WE SENDING TO THE CHILDREN????

In the spirit of equal time, here's some messages from the other side.

First, an informative little botany lesson about the Devil's flower from a country singer who called himself "Mr. Sunshine." (Mr. Sunshine? Was this some kind of weird drug code?) This video uses footage from a classic docu-drama called Reefer Madness that tried to set the record straight.

Next is a song with the same title by someone named "Johnny Price." The true message of this song is that an obsession with marijuana can lead to crime ... at least the crime of plagiarism. This funky dude stole the title from Mr. Sunshine and the tune from Johnny Cash's "San Quentin."

And here's "The Story of Susie," a sad tale about a young girl for whom marijuana was a gateway drug: The gateway to doom!

I wonder if Susie was a friend of Jeannie in the next song, "A Box of Grass." The two girls met the same tragic fate and it's all because of the Devil's Flower.