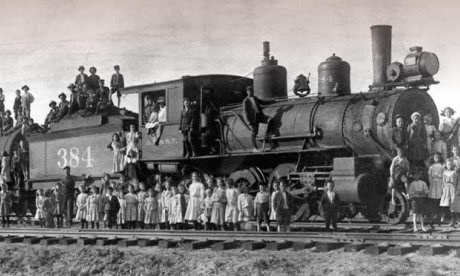 There is a sad and strange chapter in American history that has inspired a number of haunting songs in the past 15-20 years.

It was a part of history that they didn't teach us in high school. In fact I wasn't aware of the phenomenon until I heard a song, quoted above, sung by Tom Russell on his 1999 album, The Man from God Knows Where. (My curiosity about certain songs frequently has helped me to fill little gaps in my education.)

This tune was called "Riding on the Orphan Train," and it was written by a New York folksinger named David Massengil. It's a heartbreaking story of two orphan brothers who were separated. The younger one was haunted all his life by the memory of his brother and the hope to be reunited.

A couple of years later I heard another song -- "Eddie Rode the Orphan Train" by a singer named Jim Roll. (That song would later be covered by Jason (of The Scorchers) Ringenberg on one of his solo albums.

So what was the orphan train?

According to The Children's Aid Society, the charity that began the orphan train program:

"... an estimated 30,000 children were homeless in New York City in the 1850s. Charles Loring Brace, the founder of The Children's Aid Society, believed that there was a way to change the futures of these children. By removing youngsters from the poverty and debauchery of the city streets and placing them in morally upright farm families, he thought they would have a chance of escaping a lifetime of suffering."

This 2007 article by Dan Scheuerman in Humanities, a publication of the National Endowment for the Humanities, explains more:

Between 1854 and 1929, a quarter million abandoned babies and “street rats” (as the older children were referred to by police) left slums in New York, Boston, and other coastal cities aboard trains, headed for new lives in the country. ... 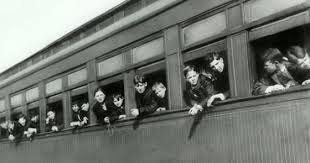 Children would board a westbound train in groups of up to forty, accompanied by two agents from the society, and preceded by circulars advertising, said Holt, “their ‘little laborers,’ as they were called.”

When the trains stopped, the children were paraded from the depot into a local playhouse, where they were put up on stage, thus the origin of the term “up for adoption.” Here, “they took turns giving their names, singing a little ditty, or ‘saying a piece,’” according to an exhibit panel from the National Orphan Train Complex. Less cute scenarios, said Richter, resembled slave auctions. “People came along and prodded them, and looked, and felt, and saw how many teeth they had.”

The goal was to find good Christian homes for the transplanted street rats. And in many cases, that happened. But some of the "morally upright farm families" turned out to fall short of that ideal. Many of the children would be treated as indentured servants. There were cases of abuse, sexual and psychological. Many ran away. Some were kicked out of their new homes by their foster parents.

Scheuerman quotes Roberta Lowrey, a genealogist and the great-granddaughter of an orphan  train rider.

“They were so much better off than if they had been left on the streets of New York. . . . They were just not going to survive, or if they had, their fate would surely have been awful.”

Below are songs of the orphan train.

David Massengil, introducing this live version of  "Riders on an Orphan Train,"  talks of how he was inspired to write it after he received a letter from a man who thought Massengil might be his brother.

This song by Julie Miller uses the orphan train as a metaphor for loneliness and redemption in this song titled "Orphan Train."