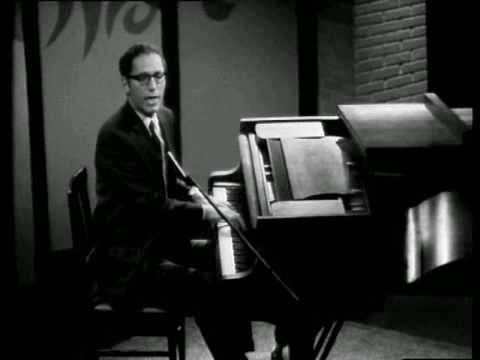 Known for his tinkling piano and a poisoned mind, Lehrer hasn't been active in the music world for decades, but during his brief heyday he was one of the musical heroes of the grim, gray '50s.

Behind his piano in  a jacket, tie and horn-rimmed glasses, he looked like the ultimate square. And yet he was singing subversive themes about nuclear bombs, lynching, pollution, the military .. and poisoning pigeons in the park. And unlike some of the people he lampooned in his song "Folk Song Army," he pulled it off without sounding self-righteous.

I've enjoyed Lehrer's music for years, but I like him even more since reading what Time magazine had written about him  -- as related in an excellent profile published last year in BuzzFeed by editor-in-chief Ben Smith.

In July 1959, Time featured Lehrer alongside Lenny Bruce and Mort Sahl as the avatars of a new “sick” comedy, which it played as the symptom of a sick society. “What the sickniks dispense is partly social criticism liberally laced with cyanide, partly a Charles Addams kind of jolly ghoulishness, and partly a personal and highly disturbing hostility toward all the world,” the magazine wrote.

That's great company to be in, Lenny, Mort and Charles Addams too. Damn, I want to be a sicknik!

So go read Smith's article and enjoy this sampler of Leher tunes below. Happy birthday, Tom!

And here's one about Los Alamos -- where Lehrer once worked for "the old AEC.".
This next one was written decades before 50 Shades of Grey,

As for the next one: WHAT KIND OF MESSAGE DOES THIS SEND TO THE CHILDREN?

Not many singers have covered Tom Lehrer songs. But one who did was Barbara Manning in the late 1990s. Backed by members of Calexico, she played with Leher's melody, bringing out all the latent creepiness and wisely omitted the first and last verse's of Leher's song, the ones that basically wink and tell listeners the whole thing is a joke. With her wide-eyed delivery, Manning creates something that is no longer a clever goof, but something that could be ripped from today's headlines..