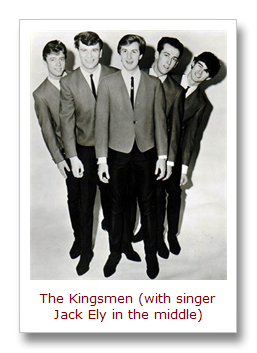 UPDATE 4--30-15: My friend Billy pointed out that the photo to the left is not the original Kingsmen. It's "Jack Ely & The Kingsmen," which Ely formed after he split from the original band. He was forced to change the name to "The Courtmen."

This Wacky Wednesday we pay tribute to Jack Ely, who, backed by his band at the time, The Kingsmen, recorded a strange little hit called "Louie Louie."

Ely died Monday at his home in Redmond, Oregon, He was 71. Here's a story in The Seattle Times.

The Kingsmen weren't the first to record "Louie  Louie. That honor goes to the songwriter and L.A. R&B titan, Richard Berry. And The Kingsmen wasn't even the firt pacific Northwest Band to record it. Was it The Wailers or was it Little Bill & The Bluenotes who first put it to wax? And Paul Revere & The Raiders weren't far behind. (Here's a brief early history of the song from a website devoted to "Louie Louie." )

But The Kingsmen  did the definite "Louie Louie." They had the first real hit with the song (even though Ely left the band not long after they recorded it.) They're the ones who inspired the FBI to investigate the song. (Skip to the bottom of this post for more on this shining highlight in FBI history.)

Come on, let's give it to him RIGHT NOW!

Any excuse to post a Sonics song. They recorded it in the '60s. This is a more recent live version.

Ike & Tina Turner took a stab at it.

Iggy & The Stooges did a completely filthy version (captured on the Metallic K.O. album.) But by the early '90s, Iggy had rewritten the lyrics to make the song about the fall of the Soviet Union. Or something.

Frank Zappa teamed up with Howard Stern in the late '80s to screw around with it,

So did The Clash.


Brave Combo turned it into a cha cha cha.

Here's an easy listening rendition by The Sandpipers IF YOU DARE!

And of course, The Kingsmen!

And to make Wacky Wednesday even wackier, here are documents from the FBI's 1964 investigation into The Kingsmen's "Louie Louie." They wanted to make certain that Ely's unique vocals weren't hiding secret obscene lyics that might harm the children. J. Edgar's boys eventually determined "Louie Louie" was "unintelligible at any speed."