Here's a Wacky Wednesday April Fool's Day tribute to one of the craziest rock 'n' roll pranks of all time.

It involves a punk band called The Dwarves and their guitarist known as HeWhoCannotBeNamed.

In April of 1993 (I can't swear that the date was April 1, but the holiday was bound to have had something to do with this) The Dwarves announced that HeWho had been stabbed to death in a barroom fight in Philadelphia.

The horror! Dying in Philly!

But it turned out to be a little joke.

Their label at the time SubPop, was not amused.

The label issued a press release on June 23, 1993, saying that Dwarves vocalist Blag Dahlia had provided the label "with detailed, repeated and convincing evidence that Hewho had been killed in what appeared to be  an anonymous `bar fight' in Philadelphia last April, a few months following their winter European tour.

I'm still not sure what an "anonymous" bar fight is, but let's continue:

"The information was even detailed enough to have included an address to send flowers and condolences, for which we received a thank-you card from Hewho's `family' in Wisconsin. ...

"When we discovered it was a hoax, we accepted Blag's defense that it was a 'punk rock thing to do,  in keeping with the spirit of the band, a simple experiment in media exploitation, and at very least a long-overdue spark of something remotely interesting in a supposedly `alternative' music scene that , as recently evidenced by Lollapalooza, has become as staid, corporate and boring as the institutions it originally sought to shatter.

"While all of the aforementioned may be true, it is also true that the whole ordeal unforgivably overstepped the bounds of media manipulation and self-promotion. ...[it's] an inexcusable exploitation and trivialization of death itself."

The release went on to mention two musicians who actually had recently died "whose deaths were most readily associated with the purported death of HeWhoCannotBeNamed. ... the obvious fact remains that everyone has been affected by death, and crass exploitation of these emotions in what essentially amounts to commercialism is inhuman." 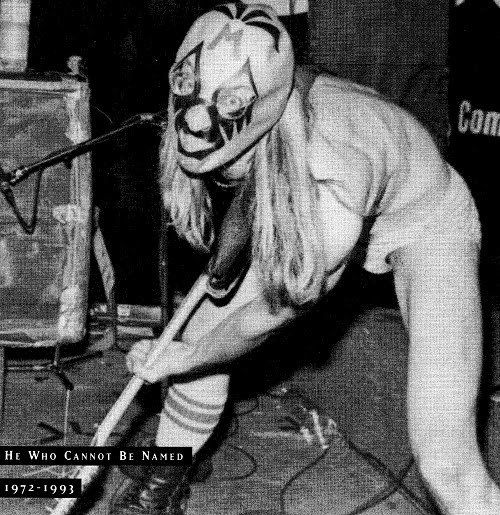 But this public upbraiding wasn't the only consequence of the hoax. In the same press release, SubPop announced that the upcoming Dwaves album Sugarfix would be the last one on the label. And it was.

At that point it was too late to change the artwork in the CD booklet, which had a black-and-white photo of the masked guitarist with the inscription "He Who Cannot Be Named 1972-1993."

If that birthdate is more trustworthy than the death date. he would have been 20 or 21 when all this came down.

And the album ended with a song that would have looked prophetic had the beans not been spilled on the hoax. It was called "Wish That I Was Dead." The liner notes said that was for Del Shannon, whose suicide in 1990 was not a hoax.

Asked about the death prank in Eric Davidson's (New Bomb Turks) 2010 book We Never Learn: The Gunk Punk Undergut, 1988-2001 Blag said, "Well, HeWho transcended life and death, he is a great figure and he fucking dies for your sins. I told them that at SubPop. How was I supposed to know he would rematerialize? Meanwhile, they had no sense of humor about it ..."

So you decide: was this good rock 'n' roll fun or a sick example of bad taste? But, as Charlie the Tuna might say, do you want rock 'n' roll with good taste or rock 'n' roll that tastes good?

Hewho's still in the band, though he's done some solo stuff as well ...

And you can still find this magic song:

(Thanks to FLICKR member warrenjabali for preserving the SubPop press release)