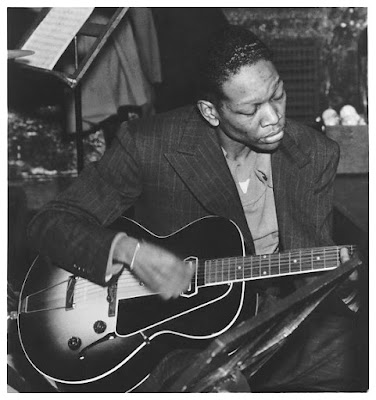 That's a good excuse to re-run an old column I did about Christian, a fellow native Oklahoman.

A version of this was published in The Santa Fe New Mexican
October 26, 2002 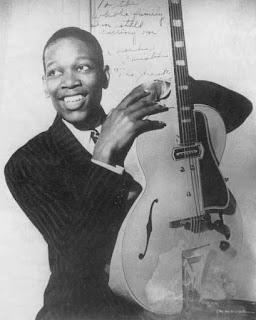 This isn’t a record review. It’s a tirade, so get ready.

While listening to the wonderful music in Charlie Christian: The Genius of the Electric Guitar, a four-disc box set and reading the booklet, I got seriously angry.

Charlie Christian was the first great electric guitarist. Ever. He played with Benny Goodman circa 1939 to 1942, the year Christian died of tuberculosis. Virtually all the tracks in the box are by Goodman’s band, which, at least in Christian’s early days, included Lionel Hampton on vibes and Lester Young on sax.

In reading the booklet, I learned Charlie Christian was from Oklahoma City, my hometown. An essay by Les Paul even tells how Charlie sat in with Bob Wills and the Texas Playboys in OKC.

What angers me is the fact that I didn’t know that until now. I hadn’t even heard of Christian until my early 20s, probably the first time I read an interview with B.B. King, who worshiped him.

It is inexcusable that no teacher in all those years I went to school in Oklahoma (up to the ninth grade) ever mentioned that one of the true innovators of jazz was from Douglas High School, just across town. No teacher ever mentioned that it was possible for even a poor black kid from OKC to go to the top of his profession, as Charlie Christian did.

Maybe it’s because my worthless history teacher was too busy preaching the virtues of George Wallace and bemoaning the fact that Vietnam War protesters weren’t being tried for treason. 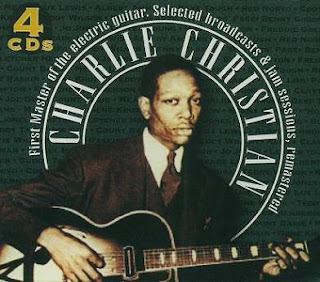 Maybe it’s because Charlie Christian was black. Segregation was dying hard in Oklahoma in the 1960s.

Or maybe it was nothing sinister. It’s probably just that the teachers were too unhip, too thick and culturally crippled even to know that a local kid had grown up to play in Benny Goodman’s band. Still ...

We were never taught about Woody Guthrie in Oklahoma either, which also is a stupid shame, but given the twisted anti-commie paranoia of the day, I can understand that omission far more than I can understand ignoring Charlie Christian.

So Charlie Christian: The Genius of the Electric Guitar isn’t just great music. To me, it’s small reparation for something I was cheated out of as a youngster.